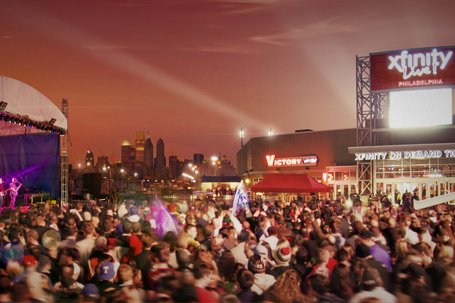 After four months of renovations, on Friday the three-year-old venue revealed its new look. Improvements include an expanded beer hall, two new restaurants including a Geno's Steaks and more outdoor patio space. On top of all that, the venue polished up its lighting, signage and landscaping.

The expansion has created 75 permanent new jobs, including restaurant employees, managers and security, the company said.

There have been more than a few changes at venue, located inside the South Philadelphia Sports Complex:

Spectrum Grill was replaced by 1100 Social, a Mexican-Asian fusion restaurant boasting Jason Cichonski, best known for his Queens Village restaurant Ela, as the head chef. Next door is a new 4,000-square-foot elevated terrace, intended for use as a private event space.

Victory Beer Hall expanded with an exterior beer garden and outdoor seating with fire pits. It's got 24 new taps, 160 more seats outside and 500 more seats inside, the Philadelphia Business Journal reported. PBR Bar and Grill also got a new 3,000-square-foot covered patio.

As the story goes, if you give a Philly sports fan a beer, they're going to ask for a cheesesteak. Luckily, Geno's is opening up right next door to the beer hall.

Overall, it's not a bad place to hang out after a game (or during, considering how local teams have performed this year).