Joe Kelly is 'extremely lucky to be alive' after responding to a domestic incident, fellow officer says 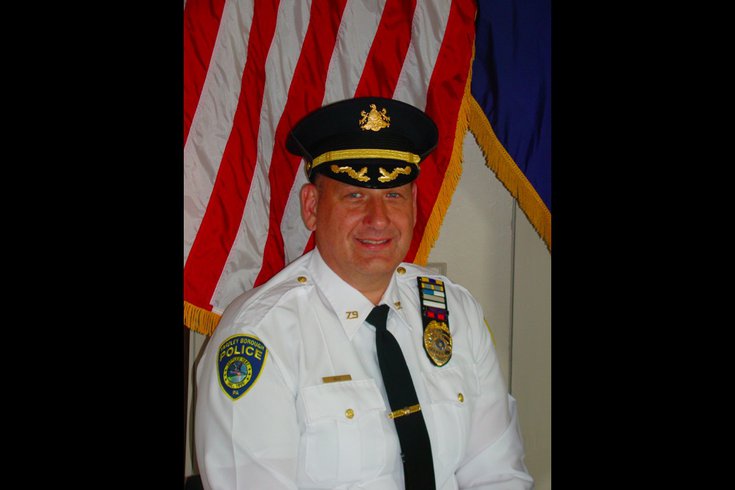 Yardley Borough Police Chief Joe Kelly was shot while responding to a domestic disturbance at the Yardley Commons apartment complex on Aug. 18, 2021.

Yardley Police Chief Joe Kelly is conscious and "doing very well" after being shot in an ear and a hand during a standoff Wednesday at an apartment complex, Bucks County District Attorney Matt Weintraub said.

Weintraub addressed reporters Wednesday outside of St. Mary Medical Center in Langhorne, where Kelly was hospitalized. With Kelly's family by his side, Weintraub said the police chief wanted the public to know he was doing OK.

"We are incredibly grateful, relieved, prayerful that he will survive his injuries and make a recovery," Weintraub said.

Colin Petroziello, the 24-year-old accused of shooting Kelly with a shotgun, was arrested around 3:45 p.m., according to NBC10. The hours-long standoff at Yardley Commons prompted police to issue a shelter-in-place order to residents of the complex on South Main Street.

Petroziello will be charged with attempted murder, the Inquirer reported.

Kelly responded to Yardley Commons on Wednesday morning to assist Bucks County probation officers who were called to a domestic situation at the apartment complex, according to 6ABC. Shots were fired when Kelly entered the apartment.

"He's absolutely extremely lucky to be alive," Kenneth Coluzzi, chief of the Lower Makefield Township Police Department, told reporters at the scene, according to NBC10. "He never thought that he would encounter a shotgun being pulled and fired at him in this situation."

Petroziello was taken into custody without additional incident, Weintraub later told reporters at the scene of the standoff. No other injuries were reported.

Coluzzi said police evacuated as many apartments at Yardley Commons as possible and a nearby daycare facility while dealing with the barricaded suspect.