In Philly, COVID-19 booster shots will be given through existing vaccine providers, officials say 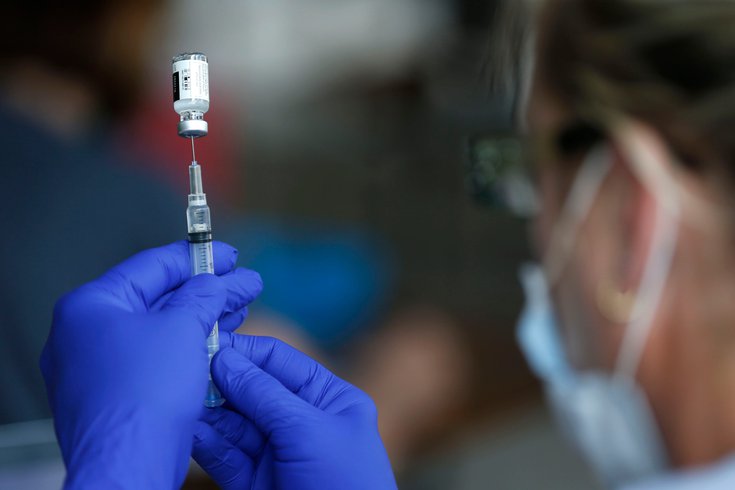 U.S. officials say they are prepared to start administering booster shots of the Pfizer and Moderna COVID-19 vaccines as early as Sept. 20.

People who received the Pfizer or Moderna vaccines, regardless of age, will need COVID-19 booster shots eight months after they received their second shots, the U.S. Department of Health and Human Services announced Wednesday.

Federal officials said they are prepared to start administering booster shots as early as Sept. 20, pending approval by the U.S. Food and Drug Administration.

The first booster shots will go to people who were vaccinated in the initial rollout of the vaccine. This includes health care providers, nursing home residents and some seniors.

People who received the Johnson & Johnson vaccine also will likely need a booster, but more data is needed before a plan can be put into place.

Philadelphia health officials said that they will follow recommendations on boosters from the U.S. Centers for Disease Control and Prevention. They will administer them through existing vaccine providers when more information or guidance becomes available.

The HHS announcement comes as the United States experiences a new surge in coronavirus cases. The prevalence of the more contagious delta variant in the country, the potential waning immunity offered by vaccines, reduce precautions and the number of unvaccinated Americans are all possible factors in the surge.

The World Health Organization has urged countries against offering booster shots, emphasizing a greater need for vaccines in countries with limited access. The WHO reiterated that stance Wednesday.

"There is enough vaccine around the world, but it is not going to the right places in the right order," senior advisor Bruce Aylward said a news conference, according to Reuters.

"The COVID-19 vaccines authorized in the United States continue to be remarkably effective in reducing risk of severe disease, hospitalization and death, even against the widely circulating delta variant. Recognizing that many vaccines are associated with a reduction in protection over time, and acknowledging that additional vaccine doses could be needed to provide long lasting protection, we have been analyzing the scientific data closely from the United States and around the world to understand how long this protection will last and how we might maximize this protection. The available data make very clear that protection against SARS-CoV-2 infection begins to decrease over time following the initial doses of vaccination, and in association with the dominance of the delta variant, we are starting to see evidence of reduced protection against mild and moderate disease. Based on our latest assessment, the current protection against severe disease, hospitalization and death could diminish in the months ahead, especially among those who are at higher risk or were vaccinated during the earlier phases of the vaccination rollout. For that reason, we conclude that a booster shot will be needed to maximize vaccine-induced protection and prolong its durability."

The CDC also released three studies Wednesday that suggest the Pfizer and Moderna vaccines remain highly effective at preventing COVID-19 hospitalizations, but that their abilities to prevent infection have weakened. It's not known whether that reduced protection is the result of waning immunity, the delta variant or relaxed precautions.

"Those numbers are actually very good," Murray said. "The only group that these data would suggest boosters for, to me, is the immunocompromised."

The FDA approved boosters for people who are immunocompromised last week.

Almost 100% of the current COVID-19 cases in the U.S. are now caused by the delta variant, according to the CDC. August already has seen the third-most monthly cases in 2021. Only January and February were worse. According to the CDC's COVID Data Tracker, there have been almost 37 million cases since the beginning of the pandemic.

Meanwhile, vaccination coverage is uneven throughout the country. In some states, less than 50% of eligible residents are fully vaccinated.

"Nearly all the cases of severe disease, hospitalization and death continue to occur among those not yet vaccinated at all," the federal officials added in their statement.