With delta variant surging, pediatric hospitalizations hit their highest mark amid the pandemic 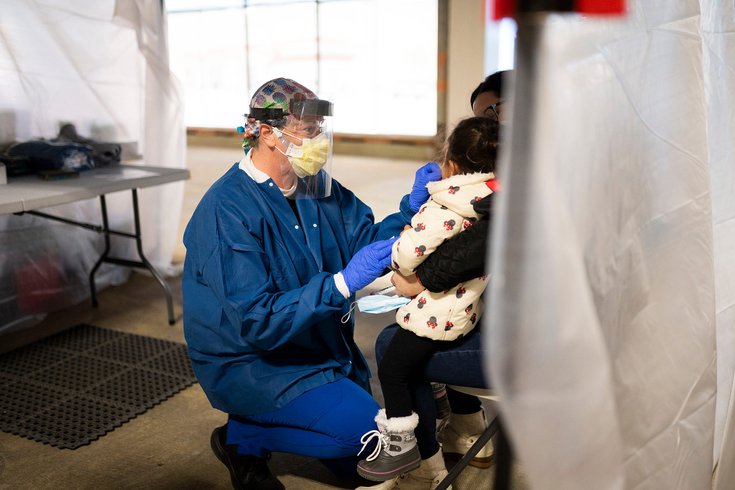 About 1,900 children are currently hospitalized with COVID-19 — the highest amount of the pandemic. Above, a small child is tested for COVID-19 in Massachusetts last December.

With COVID-19 cases among children surging, a new study suggests infants and toddlers are more likely to spread the coronavirus among family members than teenagers.

A big factor is that babies and toddlers are too young to be isolated once infected, according to researchers from Canada's Public Health Ontario. But they emphasized that young children are not driving the latest wave of the pandemic, though they are playing a role in it.

The U.S. Department of Health and Human Services reported Monday that about 1,900 U.S. children were hospitalized with COVID-19 on Monday — a record high. Pediatric hospitalizations are now 4.6 times higher than they were just five weeks ago.

And there have been twice as many COVID-19 deaths as influenza deaths among children this year, according to the U.S. Centers for Disease Control and Prevention.

Experts aren't sure whether this surge is due to the more contagious delta variant or behavior changes.

Dr. Edward Behrens, chief of the rheumatology division at Children's Hospital of Philadelphia, told ABC News that people have wrongly believed children are not at risk.

"It was a comforting narrative that was never true," Behrens said. "They [children] always had the potential to be a reservoir for the virus."

Earlier in the pandemic, some infectious disease experts believed children were less susceptible to the coronavirus than adults because they made up such a small percentage of COVID-19 cases. They hypothesized that children not only were less likely to become seriously ill, but they also were less likely to transmit the virus.

Different theories abounded, including the idea that children had better immunity against the virus because of more recent exposure to other coronaviruses, like those that cause the common cold. But no clear reason was ever determined.

Now, some experts suspect the low rate of cases among children may have been the result of children having little social interaction outside their immediate families during the stay-at-home orders.

"I think they were biased by the fact that children were sequestered at home," Dr. Tina V. Hartert, a respiratory epidemiologist at Vanderbilt University, told The New York Times. "They were recommended not even to play with neighbors, they didn't go to school, they didn't go to day care."

The study, published in JAMA Pediatrics, was based on records of COVID-19 cases and positive coronavirus tests in Ontario between June 1 and Dec. 31, 2020. Researchers identified an "index case" in each household – the first person to be infected with the virus.

They found 6,280 households in which the first person to test positive for COVID-19 was under 18 years old. In nearly 30% of the households, the child spread the virus to at least one other person in the home.

Adolescents were more likely to bring the virus into the home – they made up 38% of all index cases, researchers found. But children age 3 or under, once infected, were most likely to spread it to others in the home. Household transmission was 40% more likely when the infected child was a baby or a toddler.

This disparity boils down to behavioral differences between older and younger children, experts say. Teenagers are more likely to bring the virus into the home because they spend a lot of time with their peers in close quarters hanging out, touching and sharing food and drinks.

Very young children are more likely to spread the virus because they need to be in close contact with their caregivers. They also frequently put their hands or objects in their mouths, which can contribute to viral transmission. Some studies have shown that children carry the same or higher levels of the virus as adults.

Though caregivers of sick children can't avoid contact with the virus, doctors say parents can limit the spread in the home by practicing good hygiene while caring for sick children.