Thanks to faulty trucks, trash day has different meaning for Fairmount 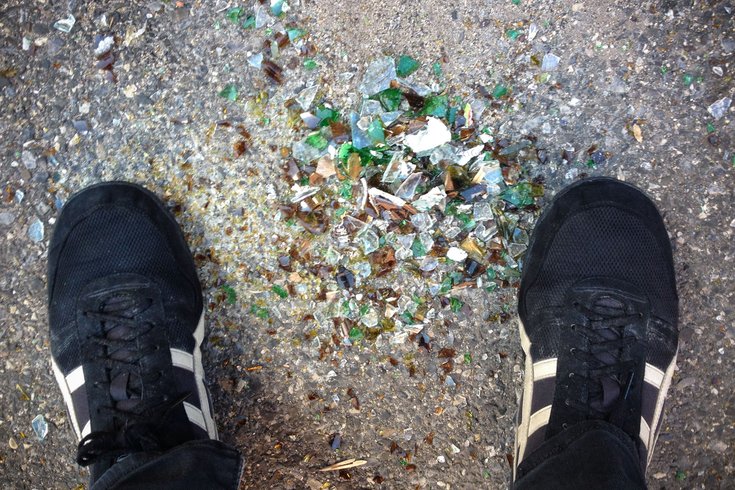 The 800 block of N. Bucknell St. in Philadelphia’s Fairmount neighborhood is narrow, tree-lined and charming. Like many of the other similar streets that are now making Center City residential neighborhoods skyrocket in value, it’s a pleasant place to walk around.

Except on garbage day, that is.

That’s every Wednesday morning, typically between 9 and 11 a.m., when city trash and recycling trucks come barreling up the street’s narrow confines. More often than not, they don’t just pick up the garbage. They also spill it.

Every time the truck stops to compact its contents, it squeezes some of those contents out of the bottom of the truck. The result is a long stretch of broken, sharp and stinking debris, laid out in regular rows the whole length of the street.

Brian Curtis, who’s lived there four years, says he’s seen it all: Used kitty litter mushed up with moldy chunks of cheese, sharp shards of broken beer bottles that skitter across the asphalt in the wind, bits of stained paper that clearly came out of someone’s bathroom trash.

“Sometimes it’s just really nasty,” he said. “And it pretty much always stinks.” 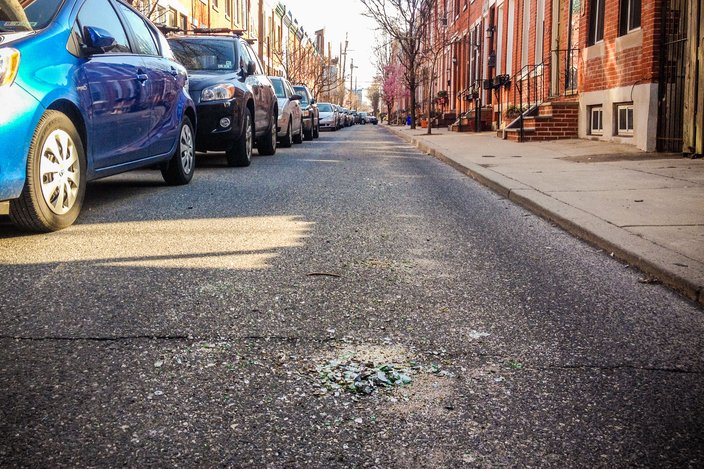 
Caroline Gore, who lives around the corner, said she noticed the problem as soon as she moved to Philadelphia from Michigan about a year ago.

“This is a beautiful neighborhood, and it's just constantly covered in garbage,” she said. “I don’t think people are being careless with their garbage. I think it really is a lack of reliable equipment.”

Both of these relative newcomers to the city are somewhat perplexed by the lack of response – by neighbors as well as city workers.

For starters, Curtis said, he wonders why a broom and shovel are attached to the side of the truck.

“I think it must just be there for decoration, because I’ve never once seen it get used,” he said.

Then there’s the way everyone seems to just accept the mess. He just had to shake his head, he said, when one of his neighbors commented on how the street looked unusually clean one recent trash day.

“Guess what – that’s because somebody – me - swept it up! It takes me about half an hour every week. But what am I going to do, look at the trash all week and watch it blow around the street? I can’t shovel the whole street, but I can clean up my own block.

“I come from Seattle, where I guess things are different,” he added. “I don’t get it about Philly – people here don’t seem to take action about stuff like this.”

But the real surprise was what happened when they stopped to talk to the guys who actually run the truck.

Curtis got little more than a shrug.

“They basically just told me, ‘You think this is bad? You should see what it looks like over on Judson.’”

Gore, though, said she was more than a little rattled when the sanitation workers actually shouted at her. She’d been picking glass out of her dog’s paws for weeks when she ventured to stop the truck and ask what the problem was.

“I wasn’t blaming them or anything, I was just asking, and I was really taken aback by the way one of them yelled at me,” she said. “He basically said, ‘It’s not our problem,’ and then the other guy told me to call 311.”

“They told me they’d make a note of it, and that I should just keep calling,” she said. “But I didn’t notice that it made any difference.”

You could hardly blame these two relative newcomers if they just gave up and turned into the kind of resigned city residents they see living in their neighborhood.

But they didn’t. They called me.

“I’ll have a manager inspect the truck that does that route, and if there are any issues with the seal, we’ll take care of it,” Carlton told me.

He added that he’d also have a manager monitor the crew for spillages – and whether or not they’re getting swept up.

To which I say, thank you, Deputy Commissioner Carlton.

But I have to wonder: What took so long? And why does it take a call from a news outlet for anyone to take notice?

Because it turns out that this kind of spillage is a historic issue with city trash trucks. It happens when the rubber seal between the truck and the hopper erodes, creating holes through which the garbage squirts out when the compactor is turned on.

“We call it ‘trash juicing.’ It’s the way the trucks are designed, with holes that are supposed to let fluid out,” Carlton told me. “But over time we had a lot of complaints about the stench that the fluid would leave behind, so we had a seal made to plug them up.”

Streets Department spokeswoman June Cantor said the problem on the 800 block of N. Bucknell is an isolated issue and not an ongoing problem.

But I’m pretty sure the residents would not agree.

On this street, for instance, the official record of complaints dates back five years – one in February 2010, one in November 2011 and two in March 2013. And that doesn’t include all the grousing and complaining done by neighbors who no longer bother to call 311.

There’s something wrong when any city street gets so trashed, so regularly, by its own workers.