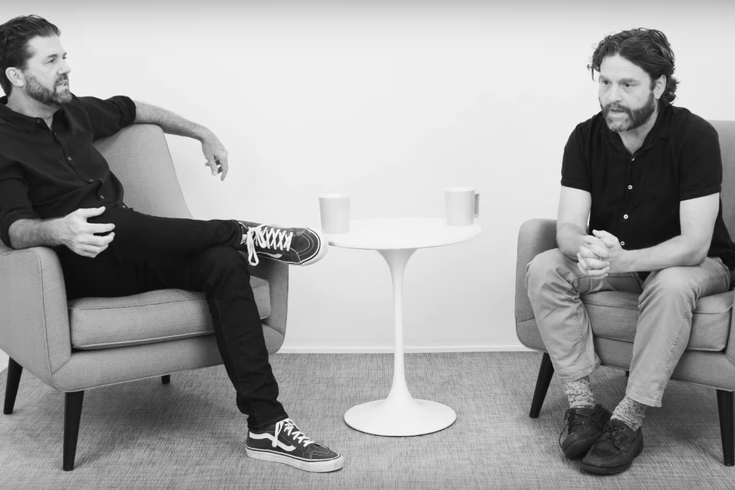 Zach Galifianakis talked about bombing on SNL and getting comforted by the angel that is Tina Fey in a recent episode of 'The Off Camera Show with Sam Jones.'

Zach Galifianakis told a heartwarming story about Tina Fey and his very brief stint at SNL in a recent interview.

On "The Off Camera Show with Sam Jones," Galifianakis revealed that while he did get a shot at being a writer for NBC's "Saturday Night Live," during the same time as some of the show's greats, like Upper Darby-native Fey, Amy Poehler, and Maya Rudolph (the two got hired on the same day), it didn't last very long.

"I got there, and I was like, 'I cannot believe I am going to be on the show,'" he told Jones in an interview from September. "'Saturday Night Live' was a big deal for me."

Galifianakis had auditioned for the show a couple times and thought he was being hired as a cast member. But it turns out, there was a miscommunication, and he was only there for a two-week trial run as a writer.

Galifianakis describes being at the SNL table read where writers and cast members pitch sketches for the upcoming show. Britney Spears was hosting the show that week, and Galifianakis had an idea that involved Will Ferrell being the bodyguard to her belly button.

"After they read my sketches at the table read. You know there's 70 people there. To say it was silent ... I remember the AC "krrr," like it had shut down during the middle of the sketch. The cast members are reading it out loud," Galifianakis said. "... I just remember Tina, who I was sitting next to ... putting her hand on my shoulder. It didn't feel sarcastic, it could have been. But in my mind, it was her going, 'It's OK,'" he said.

Another reason to love Tina.