Seven reasons to ditch your car and bike to work 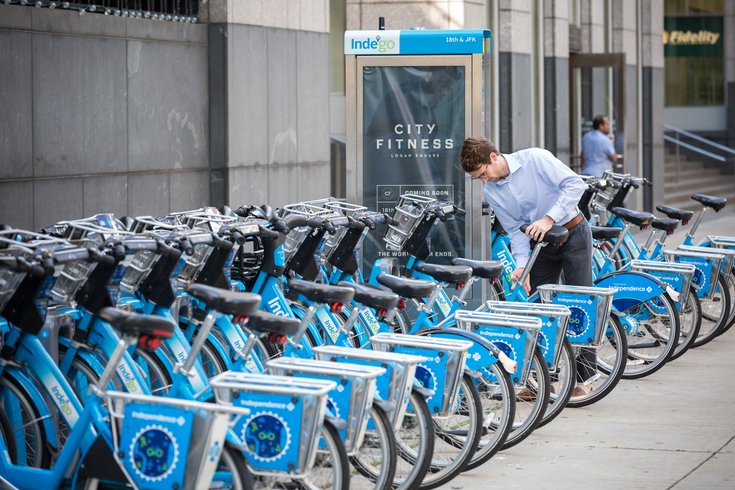 Indego bikeshare bikes near the Comcast Center in Center City.

If you’re a city resident, bike riding has a wide range of benefits – health-related perks, the sheer convenience factor, and of course, keeping more money in your wallet. Getting familiar with the following reasons for embracing an “urban bike” lifestyle may have you pedaling down city streets sooner than you think. And if you don't have a bike – no problem! With so many Indego bike-sharing stations conveniently located around Center City, there’s no better time than now to start riding!

1. Ease of getting around

No matter how much we may love the city lifestyle, there’s no denying that traffic congestion is a bummer, particularly at morning and evening rush hour. There’s nothing quite like the freedom you’ll feel when, as a city commuter, you’re sailing down a bike lane easily passing cars at a standstill in bumper-to-bumper gridlock. What’s great, of course, is that the more bikes in use, the fewer cars – and consequently less congestion. So with bikes, everybody wins.

Your carbon footprint on a bike is virtually nonexistent. The only energy source required to move you from Point A to Point B is you. More and more, people are wrestling with the moral costs to society of individual motor-vehicle use, and preferring the simplicity and ethical correctness of non-polluting “smart transport” options – like bikes.

The liberation bike riders feel – the freedom from anxiety we all experience waiting in traffic, worrying if we’re going to miss that meeting, obsessing about whether or not we’re going to find a parking place for our car – can be an astonishingly effective stress reducer. And there’s something about the “human scale” and quiet of bike transport that is inherently positive.

There’s no reason for cyclists to feel unsafe in cities, what with the explosion of dedicated bike lanes in most urban areas; the widespread adoption of helmets by most riders; and the popularity of brighter-colored and lighted biking gear. By the way, helmets are smart even on short rides, and even in cities where they’re not required by law.

Whether you’re accustomed to taking taxis, driving your own vehicle, or taking public transit, the fact is traveling around town by bike costs a fraction – in some cases a tiny fraction -- of any of these options. Other than walking, it’s possibly the most economical way to travel, period. Saving money is big part of bikes’ appeal.

The intimacy and immediacy of street life – pedestrians, vendors, stores and shops, fresh air – is something that, confined to a closed-in vehicle, you simply don’t have the pleasure of experiencing. Riding the city streets and avenues on a bike gives you a whole new appreciation of the fabric of the city and its sensory offerings, especially in fine weather.

Riding a bike is terrific for getting in shape. It works our your leg muscles, strengthens your hips, and even your upper body and arms benefit when going uphill. Like swimming, biking is a relatively gentle and non-impact exercise – as compared to running, for example – so it’s not abusive to joints. And interestingly, exercise authorities generally feel that cycling is superior to “spinning” on a health-club stationary bike, as it offers both wind resistance and real-world terrain.

Whichever of these reasons strikes the loudest chord with you, consider the city biking option soon. There are so many ways to benefit from this matchless mode of movement!