This week, all week long, we're taking a brutal look at each of the teams in the NFC East, in detail. The first target was the reigning division champion one-and-done Dallas Cowboys. Today we'll tackle the similarly one-and-done New York Giants, who got their asses handed to them in the wild-card round of the playoffs.

To note, we will not be talking about the positives of any of the Eagles' NFC East rivals, because, well, that's no fun. This will be 100 percent vitriolic. And yes, we'll torch the Eagles at the end of the series as well.

First, a look at Manning's numbers among 30 quarterbacks with enough qualifying pass attempts:

While 63 percent passing doesn't sound bad, it is when you consider the quick passing nature of the Giants' offense. In other words, Manning's 6.73 yards per pass attempt were very low, perhaps somewhat because of their system, but he didn't make up for that with a high completion percentage. By comparison, Sam Bradford gained 7.02 yards per pass attempt on a 71.6 completion percentage, and he's, you know, Sam Bradford.

More alarmingly, however, were Manning's interceptions. In a quick-strike system, your INT numbers will often be low. However, in Manning's case, he tied for the fourth-most interceptions in the NFL. Here's a look at all of them:

The thing to note in the video above is that almost all of those INTs are either egregiously bad throws or decisions. Only one came on a deflected pass, and that throw was to a receiver who was covered well anyway.

You know who else thought that Eli was bad last season? The Giants. Probably. According to Anita Marks of ESPN Radio, the Giants tried to trade up for Texas Tech quarterback Pat Mahomes, but the Kansas City Chiefs beat their offer:

More confirmation today that the #Giants DID TRY AND TRADE UP for #Mahomes. Ben loves the kid. Very upset it didn't happen @AdamSchefter

While a few Giants beat writers disagreed, Marks' report jibes with information I received that the Giants did indeed badly want Mahomes, though I can't speak on how vigorously they tried to make it happen. Ultimately, the Giants settled on Cal's Davis Webb in the third round.

Manning will turn 37 at the tail end of the 2017 season. If he's bad again in 2017, the Giants may find themselves among a large group of teams pulling from a small pool of quarterbacks.

They may be stuck in something of a purgatory, where they're good enough not to have a high enough draft pick to snag an elite quarterback prospect, but not good enough to realistically compete for a Super Bowl.

Reporter-shoving LT Ereck Flowers is a right tackle playing left tackle (he might not even be good at RT), and Bobby Hart is a borderline roster-worthy player starting at RT. Is there a worse set of starting tackles in the NFL?

2a) Actually, the Giants' offensive line as a whole is bad

The Giants' best offensive lineman might be center Weston Richburg, who is a nice center in a league full of nice centers. You could also make the argument for Justin Pugh, an above average starting LG. At RG, I'll be kind and call John Jerry a warm body. He'll compete with some other warm bodes for that job. As for depth, if any of the Giants' reserves were any good, they'd be playing over the slop ahead of them.

As a group, they make a perfectly quality human turnstile: 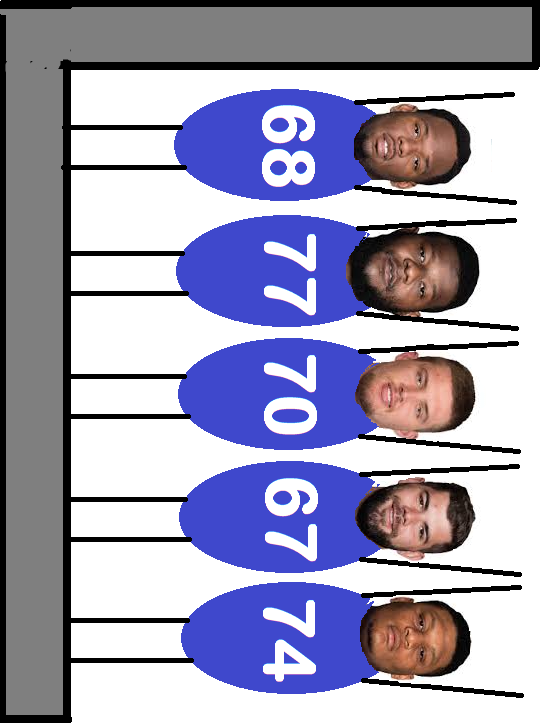 Despite their obvious deficiencies along the line, the Giants didn't select an offensive lineman until the sixth round of the 2017 NFL Draft. This was not a good draft to need offensive line help. Here are the number of offensive lineman taken in the last 15 drafts. Note the comparatively minuscule number in 2017:

“Probably inside this building we feel better about a lot of things than most outsiders feel,” Ross said. “If we feel like there is a player of value and need at the right place and the right time, we are going to take him. We’re just not going to jump over players that we feel are better players who can contribute to reach for a perceived position of need.”

While I agree with the notion that you should take the best players available instead of reaching for needs, the idea that the Giants' offensive line is merely a "perceived" need, as opposed to an obvious, tangible one is absurd, and the Giants did very little this offseason to fix it.

Last year, we noted that the Giants had gone three consecutive seasons not breaking the 4.0 yards per carry Mendoza line. Make it four straight seasons:

Here are the Giants' rushing totals over the last four years:

The Giants have finished 30th in the NFL in yards per carry in three out of the last four years. The aforementioned offensive line doesn't open up enough holes, and the backs can't run through what's available.

They are also no threat whatsoever to break off a big run. In 2016, the Giants long rush on the season was 25 yards. That was the shortest "long rush" of any team in the league. Their last 40+ yard run was in 2014.

The Giants have a talented receiving corps of Odell Beckham, Brandon Marshall, and Sterling Shepard, but when you don't have to drop a safety into the box to defend their run game, it makes it a lot easier to cover those guys.

Those numbers may look surprising, but should they, really? A season ago, the Giants had Odell Beckham, aaaaaand what else? This year, it's essentially the same group, but with a 33-year old Brandon Marshall added to the mix.

Odell Beckham is an outstanding talent, but he's a baby. First, there was this ridiculousness against Josh Norman:

And then he almost got ejected from a game in which he got owned by Vikings CB Xavier Rhodes:

And then he fought (and got beat up by) a kicking net:

And then he partied in Miami the week of a playoff game:

He had 4 catches for 28 yards on 12 targets in that playoff game, by the way.

And then he skipped OTAs. And then, well, we'll find out what's next, I guess. 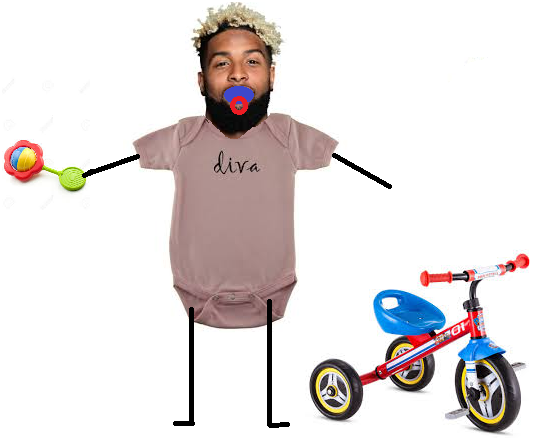 Ideally, your best players set examples for the other players on the team, on and off the field. Clearly, Beckham is the team's best player by a mile, but even Eli Manning has tired of his nonsense.

6) The Giants won a lot of close games last year

In fact, eight of their wins came by a touchdown or less, and half of those came by a field goal or less.

Meanwhile, they were pretty easily handled in four of their five regular season losses: 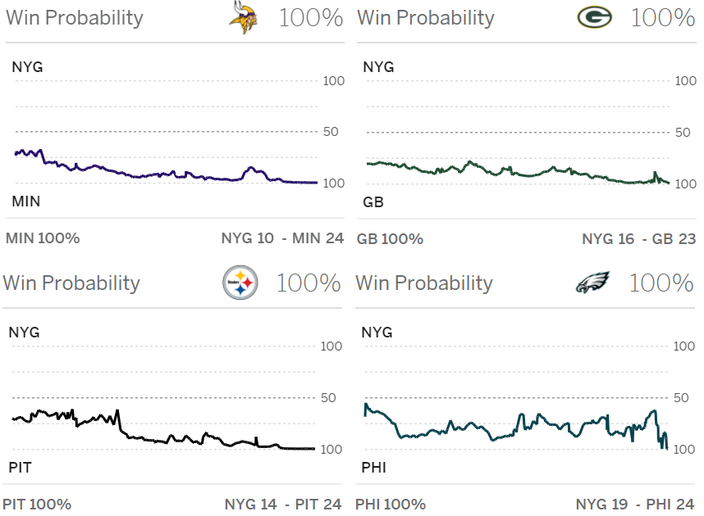 If regression to the mean works one way, it has to work the other way too, right? Or am I to understand that the Giants just figured out how to get it done late in games with extra grit and determination?

The Giants embarrassed themselves last season with the gross mishandling of wife-beating kicker Josh Brown. Essentially, Brown was a great kicker for the Giants, so the ownership and management conveniently decided to look the other way, even when Brown told the club that he abused his wife. When that situation escalated, they were left to find a new kicker, midseason. They signed Robbie Gould, who proceeded to hit 10 of 10 field goals down the stretch, though he did miss three PATs.

The only kicker on the Giants' roster presently is someone named Aldrick Rosas, a 22-year-old former undrafted free agent who was cut by the Titans last offseason.

Maybe this Rosas kid (or whoever) will step right into windy MetLife Stadium and be immediately awesome. I have no idea. But let's just say it's far more likely the Giants will start missing more field goals than they have over the last four years.

8) The defense is likely to regress to some degree

That was a pretty incredible turnaround, mostly due to the acquisition of key free agents like Janoris Jenkins, Damon Harrison, and Olivier Vernon, as well as the emergence of young safety Landon Collins.

Are they going to sustain that? Are we putting them among, say, the five best defenses in the NFL? Let's see it for more than one year, please.

Yesterday, we noted that the Cowboys lost to a Packers team in the playoffs that was missing their best wide receiver, two of their top three corners, the starting running back, and their starting center. The Cowboys, meanwhile, had their full starting lineup and couldn't take care of business, at home.

Similarly, the Giants had TWO players listed on their injury report prior to the playoff loss to Green Bay. That is extremely rare for a wildcard playoff game. Almost all of the Giants' starters (on both sides of the ball) played all 16 games last season, and were healthy heading into the playoffs, when, as we'll note again, they got their asses handed to them.

This season, the Giants will play four teams that are fresh off of a bye week.

"It's just an obvious and blatant disadvantage."

The Giants cheated last year, when they had improper usage of walkie-talkies during a crucial Week 15 game last against the Cowboys.

McAdoo grabbed the walkie-talkies in the fourth quarter of the Giants' 10-7 win over the Dallas Cowboys when he was having trouble with the headsets. It was a violation of the NFL's game operations policy. Coaches are not allowed to hold two-way radios during a game because such radios are not capable of being cut off with 15 seconds remaining on the play clock.

One NFL source told ESPN's Adam Schefter last week that even though the Giants weren't communicating with QB Eli Manning within 15 seconds of the play clock ending, they had the "opportunity" to do it.

Regardless of whether or not they used the walkie talkies after that 15-second threshold (I'm sure McAdoo was extremely vigilant in making sure he didn't utter a breath once the digits hit 15), they cheated. For their cheating, their fourth-round draft pick was moved back from pick No. 129 overall to pick No. 140. That is laughable.

Additionally, the Giants got a "road game" last year at a neutral site in London. They also got one in 2007, and played a "road game" vs Saints in NJ in 2005.

For years, the Giants have gotten preferential treatment from the league office. Literally, nobody feels bad for the Giants other than their fans about that scheduling quirk.