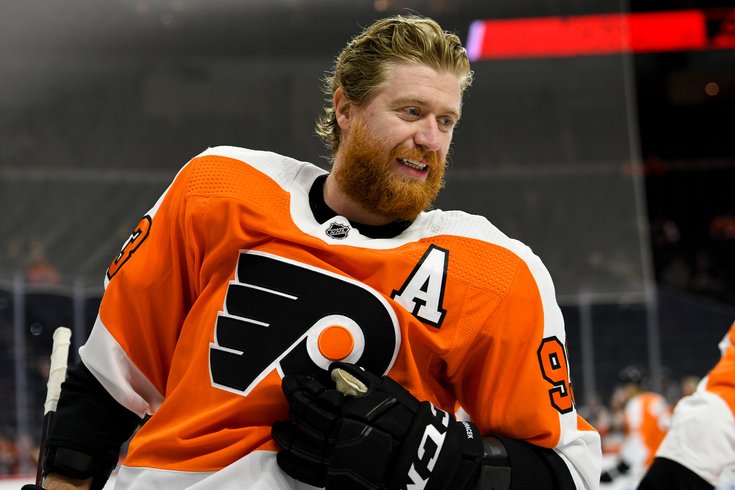 The Flyers red hot streak is showing no signs of stopping, as the squad swept a home-and-home with the Rangers Sunday at Madison Square Garden with a 5-3 victory.

The win was notable for a few reasons, one of which was their domination with the puck. Five different Flyers scored goals, with three coming on power play chances. The defense and goaltending was more than enough to lift Philly to the 83 point threshold, besting their total from one season ago.

In beating the Rangers, the team created some space in the Metro, and are creeping ever closer to first-place Washington in the division standings.

Here are three reasons why Philadelphia was able to win their sixth straight in front of a national audience Sunday afternoon:

Philly went 3-for-5 on power play chances Sunday, adding a special teams goal and a handful of impressive penalty kills — showing they can turn all special teams into advantages.

On an early power play, Matt Niskanen scored his eighth goal on a wide open net, opportunistically scoring on a rebound off a shot from Nicolas Aube-Kubel.

More power play domination came about 10 minutes later, with a Jakub Voracek setup giving Sean Couturier (who is playing with the flu) a golden opportunity to score — which he did to put Philly up 2-0.

The Flyers' power play attack entered Sunday as the 13th most potent in the NHL, but a trio of goals with a man advantage will help them crack the top 10 in the category.

More special teams domination came toward the end of the third, as Michael Raffl went to the backhand and scored high on Henrik Lundqvist as Philly was killing a Rangers power play. The strike was Philadelphia's eighth short-handed goal of the year, tied for 6th most in the NHL

The third power goal in two periods came right after a faceoff win and slap shot from Voracek — tipped in by Travis Konecny to get Philly up 5-1.

Hart on the road

We'll start this section with a stat.

#Flyers are a staggering 1-10-0 in Carter Hart’s last 11 road appearances, dating back to November.

For as good as the second-year goalie has been at home, he's been just as bad on the road. He wasn't brilliant in Sunday's win, but he didn't have to be. For the first half of the game Hart was lights out.

He finally relented (and didn't get his second shutout Sunday) as a goal on a redirect with traffic at the net got the Rangers on the board just seconds into a second period power play.

He allowed a second power play goal in the third period, with the game more or less in hand as a Pavel Buchnevich tip-in cut the Philly lead to 5-2. Things got dicy when the Flyers penalty kill unit was unable to get a critical clear, setting up Mika Zibanejad's second goal of the game and putting Philly up by only two.

Hart was still more than serviceable, stopping every even-handed shot in the game and earning the victory on the road by saving 23 Rangers shot, including this one:

Derek Grant scored for the first time as a Flyer, adding to a brilliant assist on the team's short-handed goal in the first with a breakaway deking goal early in the second to put Philly up 4-0.

Grant and fellow trade deadline acquisition Nate Thomson have slowly started to make an impact with the team. Each were low profile trade piece pickups last week — leaving many wondering if the organization did enough to keep up with other teams in the Metro, many of whom made a bigger splash via trade.

Clearly the argument to not mess too much with a good thing came into play, and with the team firing on all cylinders it is difficult to argue against many of the Flyers' front office decisions of late.

"A great group of guys," Thompson said a few games ago. "Seems like they're having a lot of fun. So, it’s fun to be a part of. We just need to keep it going, but it's a good time."

Winning sure makes for good times, doesn't it?