5 over/unders for Eagles vs. Buccaneers 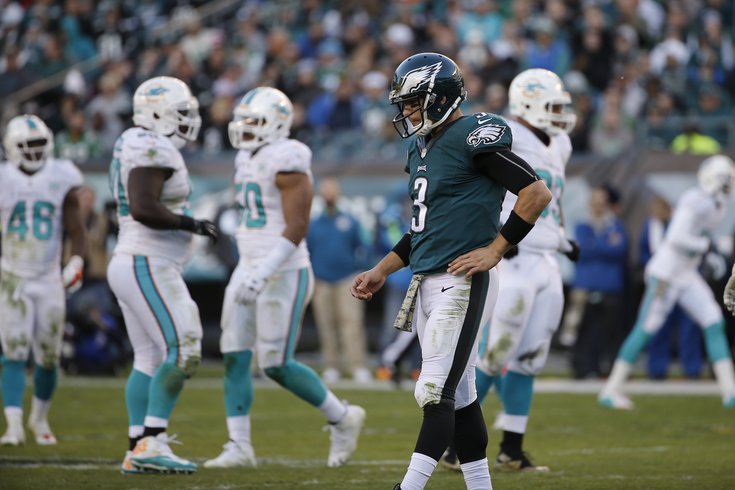 After being spectacularly wrong with my over/unders last week, I decided now would be a good time to up the difficulty level and really challenge myself. How, you ask? By focusing solely on the Philadelphia Eagles' offense, one that comes into this game with more question marks than there have been at any point during the season -- and that's saying something.

Sam Bradford's injuries (concussion, shoulder) will keep him sidelined against the Tampa Bay Buccaneers, meaning Mark Sanchez will get the start at quarterback. And that's just the tip of an iceberg that could sink the Eagles' season. Ryan Mathews, the team's most efficient runner, will also be out with a concussion suffered in last week's loss to the Miami Dolphins. Left tackle Jason Peters is questionable as he continues to work his way back from a back injury that has kept him sidelined since early in the Eagles' Week 9 loss to the Carolina Panthers.

That could make it difficult for the Eagles to rely heavily on their rushing attack, especially if the middle of their line struggles again like it did against Ndamukong Suh last week. He kept the middle clogged up the entire time, which allowed the Dolphins' second-worst run defense to hold the Birds to just 83 yards, after averaging 173.5 per game in their previous four games. This week, they'll face a similar challenge up front in Bucs DT Gerald McCoy.

However, it's not like the Eagles aren't without any hope. They still have DeMarco Murray, their starter, and Darren Sproles in the backfield, and Sanchez's favorite target, Jordan Matthews, could have a big day.

But the point is this -- with so many changes on the offensive side of the ball, it's nearly impossible to predict how efficiently it'll run against a Bucs defense that is seventh in the NFL in yards allowed (334.2/game), but 26th in points (26.3/game).

With that being said, I'm going to give it a try anyway. At least this way I'll have an excuse when I don't get any of them correct.

That's the total currently at topbet.eu. That's right around what Jimmy Kempski, Rich Hofmann and I are all predicting, based on our staff predictions. Jimmy is the only one with the over, however, predicting a total of 46 points, while Rich and I both have the under with 43 and 44 points, respectively.

The Bucs don't score that many points -- 21.2 per game and just 17 per game over their last three -- and that's good news for the Eagles, because I don't see them scoring that many points either. The only way I see that happening is if Tampa turns the ball over in its own territory a few times, giving Sanchez and the offense a short field with which to work. However, Jameis Winston, the No. 1 pick in this year's draft, has only turned the ball over three times (2 INT, 1 FUM) in his last five games, but has accounted for seven touchdowns (4 passing, 3 rushing). In those five games, his team is 3-2, after starting the season at 1-3.

Call it overreaction to last week's loss if you want, but I don't see a lot of points being scored Sunday at the Linc.

In eight starts last season, Sanchez averaged 277 yards per game through the air and threw for at least 250 yards in six of them. The Tampa defense is allowing 233.2 yards per game to opposing quarterbacks, while the Eagles offense -- albeit with Bradford for all but a quarter of a game -- has averaged 256.8 passing yards per game this season.

Those are the numbers, but if you've been paying attention to the Eagles this season, the numbers haven't really meant a whole lot (see: Dolphins game, rushing yards). If Sanchez has any kind of success Sunday, he should be able to hit this number. The Eagles run enough plays that yards are rarely their problem. It's what happens once they get inside their opponents' 20-yard line (more on that later). And considering that the offense seemed to run a little more quickly against the Dolphins once Sanchez took over, the Birds shouldn't have a problem getting 85-90 plays run. If that's the case, I think he hits the over. Whether or not that will translate into a victory depends on how well he protects ball, not just how far he throws it.

You don't want Sanchez throwing the ball 40 times. That's just a recipe for disaster, especially in his first start of the season. I'm fairly certain Chip Kelly knows that, which could mean the Eagles throw the ball 100 times on Sunday because it's what the Bucs want and Kelly has a knack for taking what the opponent gives him. Still, I think common sense prevails -- I'm going to regret this later, aren't I? -- and the Eagles feature a significant rushing attack against the Bucs, who allow 101 yards per game on the ground.

Even without Ryan Mathews, I wouldn't be surprised to see the Birds run the ball 35 or more times, depending on the number of plays they run. That could break down to something like 20 for Murray and 15 for Sproles and Kenjon Barner, who will likely play in place of Mathews. If that's the case, then I think the Eagles can hit the 100-yard mark after failing to do so last week for just the first time in their last five games (and second in their last seven).

I just eluded to the fact that I see Sproles getting more carries than usual against Tampa, but it actually wouldn't surprise me to see Barner take a healthy chunk of Mathews' carries. That would allow Sproles to line up more often on the outside and continue to be used -- or not used, depending on who you ask -- in much of the same way he has been all season.

In a way, that is a testament to just how unique of a player Sproles is. I just wish the Eagles were involving him in the offense more than they have been. Since a season-high 11 carries against the Jets in Week 3 -- when Murray was out with an injury -- the veteran back is averaging less than four carries per game. And after hauling in 15 passes on 19 targets over his first three games, Sproles has just 14 receptions on 26 targets in the six games since.

It's important to note that there may not even be that many carries up for grabs between Sproles and Barner, even if the Eagles do run the ball more now that Sanchez has been forced into action. Since Mathews ran it 24 times against the Jets, he had been averaging less than eight carries per game. And because of that, I don't think Sproles matches his season-high of 11 carries against the Bucs. But I do think he doubles the number of carries he's gotten per game since.

This is where I really think Sproles could make up for his recent lack of involvement in the offense. He will likely play a lot on passing downs, and if Sanchez is looking to dump it off, who better to throw it to than Sproles? I could see the diminutive back catching five to seven passes on Sunday And if that's the case, I think you have to take the over here.

The Eagles offense indeed look sharp at times last Sunday under Sanchez, but when it looked bad, it looked really bad. Look no further than the interception he threw in the end zone late in the fourth quarter.

I felt like there was a lot of talk after the game about Sanchez having an issue with turnovers in the red zone, especially late in games. But when I went to look up his stats in the red zone, I was shocked at what I found -- his numbers are better there than anywhere else on the field. Take a look at his at his career splits:

And his numbers from 2014 are even better:

So considering Sanchez threw a red-zone INT last week, I'm going to give him the benefit of the doubt here and say he won't turn it over this week ... at least not in the red zone.

As for the rest of the Eagles -- because a fumble still counts here -- I'm just going to cross my fingers and hope. In a way, that's all you really can do with this team.