5 over/unders for Eagles vs. Redskins

Numbers for Cousins, Bradford closer than you might think 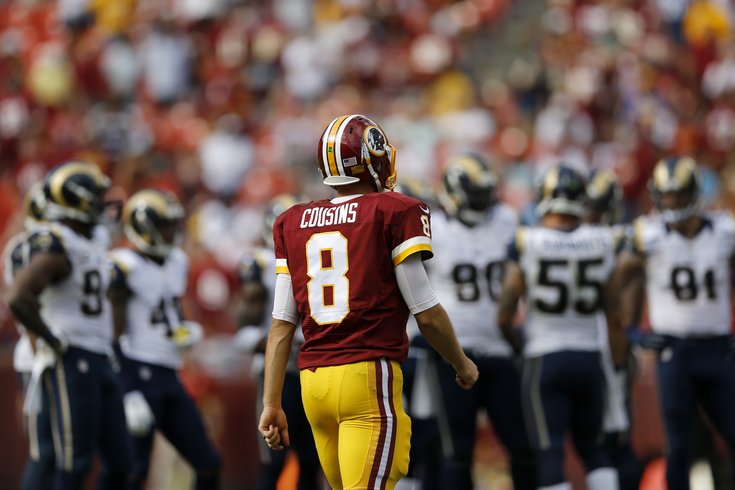 The Eagles take on Washington in Week 4 in a game that both teams desperately need to win if they hope to stay alive in the NFC East going forward. With a victory, the Eagles would basically be hitting the reset button on their season, and would hit the quarter pole with a 2-2 record (1-1 in the NFC East).

Here's the weekly over/unders for the Eagles, starting with the point total, as always:

Before even looking at the over/under for Sunday’s game, I predicted a final score of 23-21. While I can take some solace in the fact that I was right on the money, it doesn’t help much in this specific exercise. I mean, I can’t exactly predict a push on my own line, can I?

Kidding. Part of me thinks this could be the game the Eagles finally break out of the slump they’ve been in for the first three games of the season. But there’s another part that says the Birds just aren’t that good. And so far, their offense has done little to make me believe otherwise. And had it not been for a special teams touchdown against the Jets, they’d be averaging just 17 points per game. Currently, their 19.3 PPG is tied with Cleveland for 22nd in the NFL.

That’s quite a drop after ranking in the Top 10 in scoring each of Chip Kelly’s first two seasons at the helm. So if I had to bet, I’d take the under.

Let’s play a little game. I’m going to put down the career stats of two QBs — on a per game basis in order to mask their true identities — and you tell me which one you’d rather have under center.

*only in games started by QB

Now, let’s look at those same quarterbacks’ stats through three games this season.

*only in games started by QB

Now would it surprise you to learn that QB X is Kirk Cousins and QB Y is Sam Bradford? Sure, Bradford's started 52 games compared to just 12 starts for Cousins (he's played in 17 games total), but there's little difference in the career numbers of the two QBs. And when it comes to this season, Cousins, a fourth-round pick, has been outplaying the former No. 1 overall pick, despite being surrounded by lesser talent and significantly more off-field drama (read: RGIII).

In each of his first three games as the Eagles starting QB, Bradford's numbers have gotten worse by the week. He's thrown a touchdown in all three games, but take a look at his completion percentage and passing yard numbers this season:

Let's just hope the Jets game was the bottom of an upside down bell curve for Bradford, because it really can't get much worse for a passer playing in Kelly's supposedly QB-friendly offense. But playing against a Washington team that has allowed just 202 passing yards per game this season won't be easy, even if they are missing cornerback DeAngelo Hall. I still think Bradford can match his numbers from the Cowboys game, because Washington's defense -- no matter how improved -- is not nearly as tough as the Jets unit he faced a week ago.

If I'm going to put Bradford's over/under right on his season average, it's only fair to do the same to Cousins. The Eagles defense is allowing 272 yards through the air each week, which is ninth-worst in the NFL. And it's not like they've face extremely potent passing attacks. Yes, Matt Ryan and Julio Jones torched them for nearly 300 yards in Week 1. But since, they've face a Cowboys team that was without Dez Bryant the whole game and without Tony Romo for a quarter and a half, and a Jets squad led by backup Ryan Fitzpatrick.24

And if Washington struggles on the ground again this week like they did last Thursday night against the Giants, Cousins could be forced to throw even more than he already has been forced to (35.7 attempts per game). Because of that, I'm going to take the over.

The Eagles are averaging three forced turnovers per game this season, while the Redskins are turning the ball over twice per game. That's basically how I came up with this number. Complicated stuff, I know.

I'm going to take the over, but only because I think the Eagles have done a better job at creating turnovers than Washington has done preventing them.

Through two games, Murray averaged 10.5 carries per game. And that was back when he was healthy -- or at least when the Eagles were telling us he was healthy. And after sitting out their Week 3 game against the Jets with a hamstring injury, there's no reason to think he'll touch the ball any more than that on Sunday.

Murray may have practiced fully the last few days, but the Eagles have to like what they saw out of Ryan Mathews last week (24 carries for 108 yards). And knowing they have a capable -- and more importantly, healthy -- running back behind Murray, likely means that they'll give Mathews the bulk of the work against Washington. I expect the Birds to ease Murray back into action, especially if they want to make sure he doesn't re-injure his hammy.