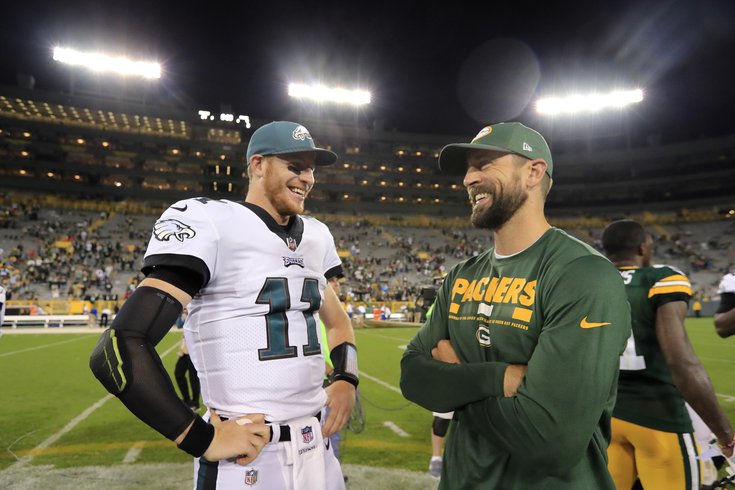 "We are laughing and we are very good friends. Good buddies sharing a special moment, laughing and enjoying our friendship, and someday we'll look back on this with much fondness."

Back in March, prior to the NFL Owners Meetings that were scheduled but never happened, the NFL announced proposed rule changes for the 2020 season.

Among them, proposed by none other than the Philadelphia Eagles, was to "provide an alternative to the onside kick that would allow a team who is trailing in the game an opportunity to maintain possession of the ball after scoring (4th and 15 from the kicking team’s 25-yard line)."

Initially, the thinking here was that it would take some time for the old heads to come around on this idea, and its chances for passing felt like they would be low. However, the NFL updated its rule changes up for consideration on Thursday, and the 4th and 15 proposal survived, while many others no longer appear.

Next week, @NFL clubs will meet virtually – among items on the agenda are a review of 2020 rules change proposals.

The rule proposal makes sense, and also, hey, it's fun! Back in the day, onsides kicks used to be recovered with a much higher frequency than they are in today's game, as a result of some player safety rule changes. Changing to the 4th and 15 system would get it back to a success rate closer to onsides kicks of yesteryear. That's explained in better detail here.

From a viewer enjoyment perspective, it feels like a no-brainer to me. When the receiving team knows an onsides kick is coming, there's almost nothing fun about it. Even on the now very unlikely chance the kicking team recovers the onsides kick, it's almost always just a pile-up, while the viewer waits for the officials to signal who has the ball. I mean, what's fun about that? A 4th and 15 scenario is so much more dramatic, and puts the game in the hands of players that fans actually care about, as opposed to special teamers.

From the Eagles' perspective, theoretically they would benefit from this rule change, as they employ a quarterback with a rifle arm capable of making tough throws down the field. Of course, the rebuttal would surely be, "But the Eagles give up a ton of long first downs with that dumb sticks defense," an idea that was factually debunked by the Inquirer's Jeff McLane.

Here's what I compiled:

Obviously, there are a lot of small sample sizes in the chart above, but it's unsurprising that the top three quarterbacks on the list with at least 10 pass attempts are Aaron Rodgers, Drew Brees, and Russell Wilson, thus confirming my hot take theory that teams with good quarterbacks would benefit more from this rule change than teams with bad ones.