Dick's Sporting Goods, Comcast and Duolingo are among those with health care policies to support employees living in states with abortion restrictions 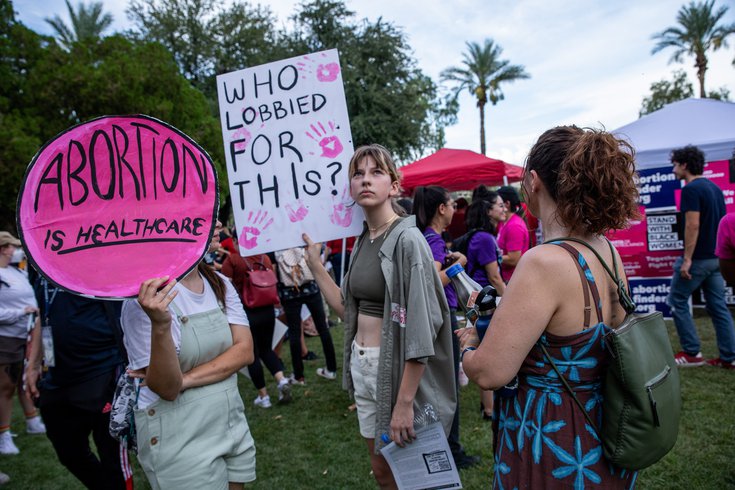 On June 24, the U.S. Supreme Court overturned Roe v. Wade. In the weeks since, several Pennsylvania and New Jersey-based national companies have said they will expand for emphasize their health care policies to reimburse out-of-state travel for those seeking a medical procedure that is unavailable in their home state.

In the wake of the U.S. Supreme Court overturning Roe v. Wade, ending the constitutional right to abortion and reversing nearly 50 years of precedent in favor of returning decisions about abortion rights back to state legislatures, national companies have grappled with what to do for their employees living in states with restrictive abortion laws.

For companies based in Pennsylvania and New Jersey — where abortion is still legal and accessible — several companies have come out in favor of expanding health care coverage for employees, enabling them to seek medical procedures that are unavailable in their home state.

Others have opted not to change their medical policy as much of the country continues to discern how abortion rights will shift throughout the country, even as trigger laws are implemented and some states have passed new, post-Roe abortion bans. Though abortion has been a controversial issue in the United States for more than half a century, 61% of Americans support abortion in all or most cases, according to Pew Research Center.

As a result, some companies, particularly in states that have become "sanctuaries" for abortion rights, like New Jersey, California, and Connecticut, have aimed to support all of their employees, no matter where they're located in the United States.

Here is a rundown of some companies that have expanded or emphasized their health care policies for employees concerned about accessing medical procedures not available in their home state.

Comcast — one of Philadelphia's largest employers — has an existing medical travel benefit for all employees, covering up to $4,000 per trip, up to three trips a year, with a maximum cap of $10,000 per year, CNN reported. Comcast is the owner of NBCUniversal, the parent company of NBC.

Burlington — best known for its large selection of coats and other winter apparel — has its roots in Burlington County. The apparel company has stores in 46 states, plus Puerto Rico.

In a statement posted to their LinkedIn page following the June 24 Supreme Court decision, Burlington doubled down on its support for abortion rights, noting that the company plans to expand its medical coverage, providing up to $4,000 in reimbursements for those seeking medical care that is unavailable in their home state.

"On Friday (June 24), the Supreme Court overturned Roe v. Wade, leaving it to states to decide whether to protect for restrict abortion rights," the post reads. "As part of our welcoming and inclusive culture, we recognize that there are strong emotions and diverse perspectives on this issue, both inside our company and around the country. One of Burlington's core tenets is that 'we believe everyone matters.' Consistent with this position is that where you live should not affect your access to health care."

Philadelphia-based Urban Outfitters and its sister brands including Free People, Anthropologie, and Nuuly, also doubled down on its support for abortion rights in the wake of Roe v. Wade being overturned. As a response, the company revealed that several weeks prior to the Supreme Court decision, URBN enacted a new reproductive health care policy, which covers travel costs for all eligible employees.

Dick's Sporting Goods was founded in Binghamton, New York in 1948. Since then, it has moved its headquarters to Allegheny County, expanding to become the country's largest sporting goods retailer with more than 850 stores and 50,100 employees. The company was among the first to explicitly come out in support of abortion rights, just hours after the Dobbs v. Jackson decision came down from the Supreme Court.

In a statement posted to the company's public Twitter account, CEO Lauren Hobart and executive chairman Ed Stack explained that the company would provide up to $4,000 in travel reimbursements for those in states with bans or heavy restrictions seeking to travel to the nearest location where abortion is available. The benefit would apply to the employee and one support person.

Duolingo — the popular language-learning app — is also based in Pittsburgh. On June 27, the company released a statement explaining the history behind several words that have become politically buzzy in the last several months and weeks.

"The recent U.S. Supreme Court decision overturning the landmark Roe v. Wade precedent, as with most Court decisions, centered on interpreting a document created over 230 years ago, by very different people and in a very different social and historical context than where we find ourselves today," said Cindy Blanco, senior learning scientist at Duolingo. "Language is closely linked to these judicial decisions, and there's a lot we can learn about society from language change."

"Pregnant" always meant "with child"- but the word was considered too vulgar to use publicly until the 1960s.

Just as our communities, cultures, and rights evolve, language adapts to the shifting realities of our time.

The company later revealed to CBS News that it would move its headquarters out of Pennsylvania entirely if the state moved to ban abortion.

Though Pennsylvania will retain its current abortion law for the duration of Gov. Tom Wolf's final term as governor, this year's gubernatorial election has turned the state into a battleground over abortion rights, particularly in the wake of the Dobbs v. Jackson decision.

While states like Delaware and New Jersey have enshrined abortion rights into their state law in an effort to curb the state legislature from passing an all-out ban on abortion, Pennsylvania's Republican-led state legislature has made multiple attempts to restrict abortion over the last several years. Each time, lawmakers were met with Wolf's veto pen.

Democratic gubernatorial candidate Josh Shapiro has promised to do the same, while Sen. Doug Mastriano, the Republican candidate, has previously introduced his own six-week ban on abortion, and has said restricting abortion would be one of his priorities as governor.