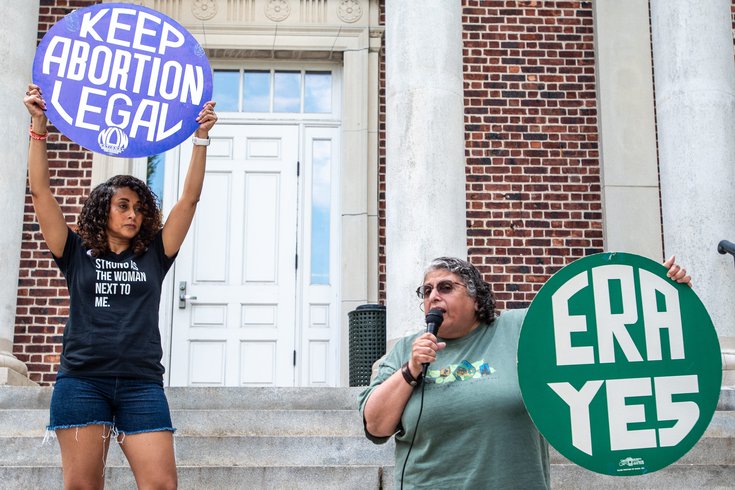 Lawmakers in New Jersey advanced three bills that would protect patients who come from out-of-state to receive abortions. The bills were passed largely along party lines, with several Republicans abstaining. The photo above shows two participants at demonstration in Teaneck, New Jersey on June 24, 2022.

Three days after the U.S. Supreme Court struck down two landmark cases that had guaranteed abortion rights, New Jersey lawmakers advanced three bills intended to protect patients who come here for abortions from states that restrict or ban it, as well as anyone who provides or facilitates abortion care.

In votes split largely along party lines, legislators in the Senate's judiciary committee and Assembly's budget committee approved a bill that would prohibit the extradition of anyone who gets or gives an abortion in New Jersey to any state that restricts or criminalizes it.

The Assembly committee also cleared a bill that would protect New Jersey abortion providers who care for out-of-state patients from civil and criminal liability and bar other states that criminalize abortion from declaring jurisdiction over them.

The Senate panel advanced a third bill that would bar public agencies in New Jersey from assisting in investigations by states that criminalize abortion and ban New Jersey abortion providers from releasing patient information to those states without the patient's written consent.

Sen. Nia Gill (D-Essex) sponsored the two Senate bills, saying they will ensure New Jersey "remains a place where our residents and those who visit here for care are able to do so freely and legally."

"Over half the nation are expected to criminalize or restrict access to abortion," Gill said. "Due to this, we know many will come to New Jersey to receive care. We must move on the state level to protect our rights and our citizens because the Supreme Court of the United States has said that the Constitution does not."

Assemblyman Raj Mukherji (D-Hudson), a co-sponsor of both Assembly bills, agreed New Jersey can't interfere with other states criminalizing a procedure that, up until a few days ago, was constitutionally protected.

But, he added, "we can exercise our legislative power— and I think we are compelled to do so — to protect behavior and actions within our state that are lawful, and protect New Jerseyans from litigation that we believe to be unjust and an attack on the medical profession and women and their bodies."

On Monday, Roxanne Sutocky of the Cherry Hill Women's Center told the Senate panel that her center, which employs 65 and serves thousands of patients, is expanding its staff and hours in anticipation of an influx of abortion seekers from other states. The center also expects anti-abortion extremist violence, and she implored lawmakers to pass the bills.

"We do not feel safe right now in New Jersey without these protections. Hostile, anti-abortion states are moving quickly on these matters. We know the overturning of Roe is not the end. We know the criminalization of abortion is to continue," Sutocky said. "If we don't take these steps to insulate ourselves from hostile state abortion overreach, we will not be able to continue to offer these services in the ways that we have."

Kaitlyn Wojtowicz of the Planned Parenthood Action Fund of New Jersey urged lawmakers to amend the bills to remove financial barriers for patients who can't afford abortion — or support a separate bill that would create a $20 million fund to increase abortion access.

"I know some legislators have stated that they're uncomfortable with going beyond protecting the right to abortion, but we must do more, especially to support communities of color who already face barriers to health care and economic disparities because of this country's legacy of systemic racism and discrimination," she said.

The bills drew a few critics, including anti-abortion activists who warned that rapists and human traffickers will bring their pregnant, underage victims to New Jersey for abortions.

"Human traffickers have a problem with recurrent abortions on their minor slaves and their slaves who are an adult, and they bring them into an abortion clinic to get the procedure done," said Gregory Quinlan, president of the Center for Garden State Families.

Marie Tasy of New Jersey Right to Life urged lawmakers to "not interfere in the actions of other states" and instead focus on "the many problems we already have in our own state."

"These bills are part of a larger effort to make New Jersey an abortion sanctuary state," Tasy said. "We already rank No. 1 in the rate of abortions performed – 48,110 abortions were performed in 2017, according to the Alan Guttmacher Institute. These bills will make New Jersey a state where even more babies' lives will be ended."

In both committees, members ultimately advanced the bills along party lines, with several Republicans abstaining.