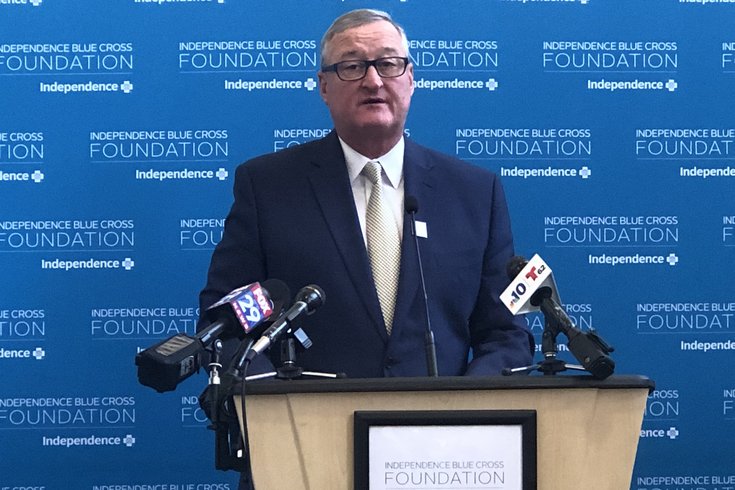 Philadelphia Mayor Jim Kenney speaks at an Independence Blue Cross Foundation event kickstarting National Recovery Month in the city. Philadelphia has one of the worst opioid crises in the United States.

Philadelphia Mayor Jim Kenney recalled his response to being prescribed 30 oxycodone pills several years ago for what he called "minor surgery."

By that point, news stories of patients becoming addicted to prescription opioids and eventually winding up on heroin had become commonplace. And an opioid epidemic felt in communities across the country was hitting the Philadelphia region particularly hard.

"I went back to the nurses and said, 'Why do I need 30 oxycodone?" Kenney said. The nurses reduced his prescription.

Various activities focusing on mental health and substance use disorder recovery are slated to take place in September. They include Narcan overdose and rescue training, a recovery walk, and a youth mental and behavioral health summit.

"We're not giving up on the neighborhoods or people that have experienced this," Kenney said. "We believe that everyone can be saved or everyone can save themselves with the right help and the right assistance."

The number of fatal overdoses in Philadelphia dropped by 8 percent last year – the first time in years that statistic has fallen. But there were still 1,116 overdose deaths – more than twice as many as there were in 2013. The vast majority of those overdoses were caused by opioids like heroin, fentanyl and prescription drugs.

Kenney stressed that the thousands of Philadelphia residents battling addiction are facing a disease, not a moral failing.

"It's not because of any personal flaw that they have," Kenney said. "This is a disease that sadly was made worse by some people in the medical profession. And we're going to get our arms around that and continue to work with our insurers and others to get those prescription numbers down."

Philadelphia is among the 200 municipalities that have sued prescription drug manufacturers, alleging deceptive marketing practices caused an exponential rise in prescription opioid sales.

Late last month, an Oklahoma judge ordered drugmaker Johnson & Johnson pay the state $572 million for its role in Oklahoma's opioid crisis. That marked the first such case in the United States to reach a verdict.

Philadelphia health officials have urged physicians to limit the amount of opioids they prescribe, creating a set of prescribing guidelines designed to maximize other pain medications and limit the duration of opioid use.

Additionally, the insurance company's foundation has sought to bolster regional warm handoff programs that facilitate referrals into a treatment facility after a patient is admitted to an emergency room following an overdose. All Pennsylvania counties are now required to have such programs in place.

"It's easy to forget addiction is a disease," said Hilferty, who has two sons in recovery. "It can be prevented, but no one can do it alone. And it shouldn't come from a place of shame."

Despite clinicians labeling addiction a disease, surveys show that many Americans do not believe that to be the case. Hilferty pointed to a Pew Charitable Trusts poll that found 58 percent of Philadelphia residents thought addiction was something people brought on themselves.

To fight that perception, IBX has launched an awareness campaign, dubbed "Someone You Know," designed to break the stigma of addiction by humanizing those battling it.

One of them – Joelle Anderson – emphasized that addiction does not discriminate, but affects all kinds of people. More must be done to help them, she said.