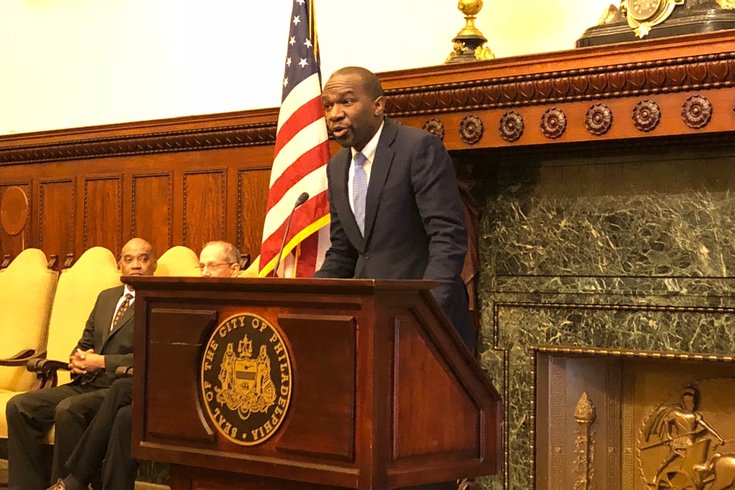 Philadelphia City Solicitor Sozi Pedro Tulante on Wednesday, Jan. 17, 2018, announces the city is suing the pharmaceutical companies that manufacture opioid painkillers, claiming the drug companies are partially liable for the opioid addiction crisis that is affecting Philadelphia and the United States.

With Philadelphia embroiled in an opioid crisis that has claimed thousands of victims in recent years, city officials are taking aim at the drug companies that manufacture and market the addictive prescription painkillers.

The city filed a civil lawsuit Wednesday against opioid manufacturers, alleging they are partially liable for the addiction crisis that has swept the nation.

The lawsuit seeks to have the pharmaceutical companies pay for the costs the city has incurred as a result of the opioid crisis, including Philadelphia's expenses for the treatment of residents addicted to opioids and suffering from opioid abuse disorder.

"City agencies have incurred tremendous and avoidable costs trying to combat this crisis," City Solicitor Sozi Pedro Tulante said at a press conference. "Because it is our duty to protect the public from further harm, I believe we have no other choice than to file this lawsuit."

Tulante declined to put a specific amount on the city's expenses, but he said the total amounts to millions of dollars.

"We need them to stop claiming that these drugs are necessary for longterm, chronic illnesses," Tulante said. "It's clear that they're not."

Among the drug makers listed as defendants in the suit are Allergan, Teva Pharmaceuticals, Endo Health Solutions, Purdue Pharma and Janssen, a pharmaceutical company of Johnson & Johnson.

Every company but Janssen responded with statements to PhillyVoice noting their individual efforts to combat the opioid crisis.

"Allergan has a history of supporting – and continues to support – the safe, responsible use of prescription medications," spokeswoman Lisa Brown said. "This includes opioid medications, which when sold, prescribed and used responsibly, play an appropriate role in pain relief for millions of Americans."

The prescription of opioid drugs in Philadelphia doubled between 2001 and 2012, leading to "unprecendented use" of prescription opioids, accorrding to Dr. Thomas Farley, the city's health commissioner.

City officials estimate that one-third of Philadelphia residents have received an opioid prescription within the last 12 months. That's 469,000 people.

"There's a legitimate use for prescription opioids in medical care," Farley said. "But nothing can justify this flood of prescribing these drugs."

Drug companies have misled doctors into believing the opioids are safe and not addictive, Farley claimed. If a patient showed signs of withdraw, Farley said they have recommended additional opioids be prescribed.

City officials claim such practices have caused a dramatic surge in opioid addictions, with many prescriptions drug users eventually switching to heroin – a cheaper and more potent alternative.

"We are deeply troubled by the prescription and illicit opioid abuse crisis and are dedicated to being part of the solution," he said.

Teva spokeswoman Kaelan Hollon issued a statement noting Teva is developing non-opoiod treatments "that have the potential to bring relief to patients in chronic pain." She said the company also works to educate communities and healthcare providers on appropriate opioid prescription use.

Endo has "voluntarily" ceased promoting its opioid medications and is eliminating its entire product saleforce, spokeswoman Heather Zoumas Lubeski said. The company also withdrew Opana ER from the market following a request by the U.S. Food and Drug Administration.

In Philadelphia, the number of fatal drug overdoses has skyrocketed in recent years and shows no signs of falling. City officials anticipate the final tally from 2017 to reach 1,200 deaths – well above the 907 overdose deaths from 2016.

Philadelphia's per-capita overdose death rate was the fourth highest in the country in 2016 – and the highest among large cities.

The city has poured resources into fighting the issue.

The city has trained and equipped first-responders to treat opioid overdoses with the antidote Naloxone, funded addiction treatment programs and increased funding for the city's criminal justice and prison systems.

Now, city officials are demanding Philly gets its money back.

The city has hired a team of attorneys to make its case, including civil rights attorney David Kairys and attorneys from six lawfirms. They will receive about one-third of any payment Philly receives.

"If the city doesn't recover a dime, these attorneys don't get paid," Tulante said. "That also means that they have to put forth a lot of their expertise and their resources up front."

With the lawsuit, Philadelphia joins a growing list of municipalities that are suing pharmaceutical companies as overdoses show no signs of diminishing.

Tulante said Philly's lawsuit is not a "copycat" version of another suit.

The suit was filed in the Philadelphia Common Pleas Court. It contains three counts alleging the drug companies constituted a public nuisance and violated both the Philadelphia False Claims Act and the Pennsylvania Unfair Trade Practies and Consumer Protection law.

"We made this lawsuit about Philadelphia," Tulante said. "We really were able to articulate how this has harmed Philadelphia, how this has hit all of Philadelphia, irrespective of your age, your gender or what zip code you live in. We want to tell our story and also rely on the legal resources we have."

The lawsuit comes one week after Gov. Tom Wolf issued a disaster declaration for Pennsylvania's the heroin and opioid epidemic, a move that paves the way for increased coordination and responses from nine state agencies.

Individual municipalities have filed nearly 200 lawsuits against drug companies in federal courts, according to a New York Times report published last month. There are dozens of other lawsuits filed in state courts.

In September, Delaware County sued 11 drug pharmaceutical companies in September, claiming they misrepresented the dangers of long-term opioid use.

And IBEW Local 98 announced its intention to sue prescription painkiller manufacturers, claiming its membership had been hit hard by the opioid epidemic.