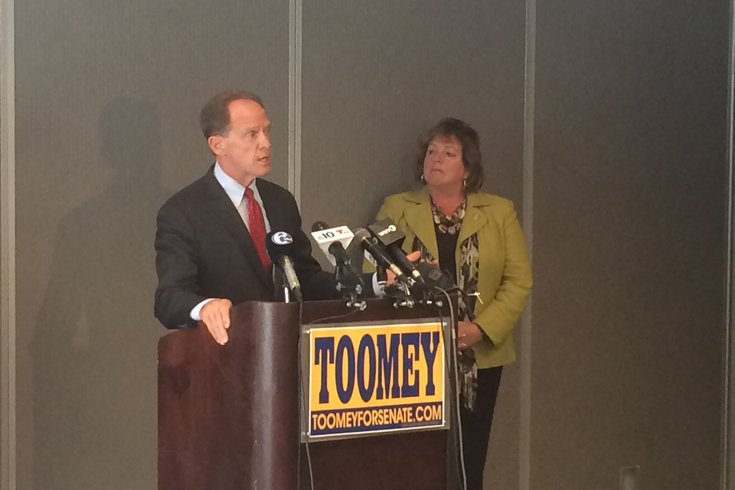 Sen. Pat Toomey, left, says Philadelphia's status as a "sanctuary city" enabled a dangerous unauthorized immigrant to remain on the streets. The immigrant was charged with raping a child last month.

Ramon Aguirre-Ochoa, a 45-year-old Honduran national, was arrested July 26 and charged with involuntary deviate sexual intercourse and related offenses. His arrest has increased the ire of "sanctuary city" opponents who say the policies leave criminals on the streets.

The U.S. Immigration and Customs Enforcement is requesting Philadelphia authorities turn Aguirre-Ochoa over to the agency following adjudication of local charges — just as it did last year following the dismissal of criminal charges filed against him in 2014.

But under the city's sanctuary policy, Philadelphia authorities ignored the previous detainer lodged by ICE and released Aguirre-Ochoa in January 2015. Now, opponents of sanctuary cities once again are condemning the city's policy as enabling criminals.

Few legislators have been louder in their opposition to sanctuary policies than Toomey, a Republican embroiled in a heated re-election campaign against Democrat Katie McGinty. He has rallied against such policies since an unauthorized immigrant killed Kate Steinle in San Francisco last summer.

On Wednesday, Toomey urged Philadelphia Mayor Jim Kenney to repeal the sanctuary policy. And he again called on McGinty to do likewise.

"The center of this debate has now tragically shifted from San Francisco to Philadelphia," Toomey said. "From the story of Kate Steinle to the story of a child who was raped."

Kenney has long supported the city's status as a sanctuary city. Within his first few days in office, Kenney readopted the policy, which former Mayor Michael Nutter had curtailed just before leaving office.

The arrest of Aguirre-Ochoa does not have Kenney reconsidering it.

“Mayor Kenney stands by the city’s policy on cooperation with ICE," spokesman Lauren Hitt said in a statement. "The federal government had full authority to obtain an arrest warrant for this individual’s deportation offense in 2014. If they had done so, the individual would have been released into their custody without any interference from the city. Currently, this individual is being held on $500,000 bail and, as in 2014, we will cooperate fully with the federal arrest warrants.”

But Toomey said requiring federal authorities to obtain an arrest warrant is a significant obstacle. He said police routinely arrest individuals under probable cause.

"ICE very much wanted to take this guy into custody and they did not get the cooperation they needed from Philadelphia," Toomey said. "If it was a simple matter of getting a warrant, I'm sure they would have taken care of it."

Aguirre-Ochoa, who uses the alias of Juan Ramon Vasquez, previously had been deported in May 2009. He later re-entered the United States and was arrested for aggravated assault and related charges in March 2014. The charges were dismissed in January 2015.

Despite the ICE detainer request, Aguirre-Ochoa walked free until he was arrested last month on child rape charges. The victim's age and gender have not been released, but Aguirre-Ochoa is charged with indecent assault on a person under 13.

Throughout the last year, Toomey repeatedly has decried sanctuary policies from both the campaign trail and the Senate floor. He has sponsored legislation that would strip federal grant funding from municipalities that perpetuate sanctuary policies.

McGinty has encouraged Kenney to reconsider Philadelphia's sanctuary policies, but she has stopped short of outright rejecting them.

"Katie has been clear that she wants local and federal law enforcement to work together to stop dangerous criminals," McGinty spokesman Sean Coit said in a statement. "Let's remember that while Pat Toomey is copying the (Donald) Trump playbook once again today, he's also the one who's voted against bipartisan immigration reform. Pat Toomey created this problem, now he wants to get credit for that by scaring people."

Toomey has drawn criticism for his hesitance in taking a stance on Trump, who has pledged to build a wall along the Mexican border and suggested undocumented Mexican immigrants are "in many cases, criminals, drug dealers, rapists, etc."

Toomey has neither endorsed nor disavowed the Republican presidential nominee, saying he is "waiting to be persuaded." He did not budge from that stance Wednesday when pressed by reporters.

"There are a number of things that he has said and done that give me great pause and I have significant concerns about," Toomey said. "I remain in a mode of waiting to be persuaded. I've not made a final decision on what I'm going to do. Hillary Clinton is completely unacceptable to me."

Meanwhile, Toomey continues to pound the drum against sanctuary cities, saying they leave violent criminals on the streets.

Advocates of sanctuary cities argue the policies create trust between police and immigrants, who otherwise might be afraid to report crimes. They also point to studies showing that immigrants are less likely to commit violent crimes or be incarcerated than the native population.

The unauthorized immigrant population grew from 3.5 million to 11.2 million between 1990 and 2013, according to the American Immigration Council. Violent crime dropped by 48 percent during the same period. Property crime fell by 41 percent.

Toomey acknowledged the vast majority of immigrants have not committed any crimes and likely never will. But given the sheer size of the unauthorized immigrant population, Toomey said some dangerous people are among them – and Philadelphia's policies should work to protect the public from them.

"This is not really about immigration," Toomey said. "This is about criminality and about keeping us safe. This is about our security."