Steve Mason is working overtime - and it's paying off for Flyers 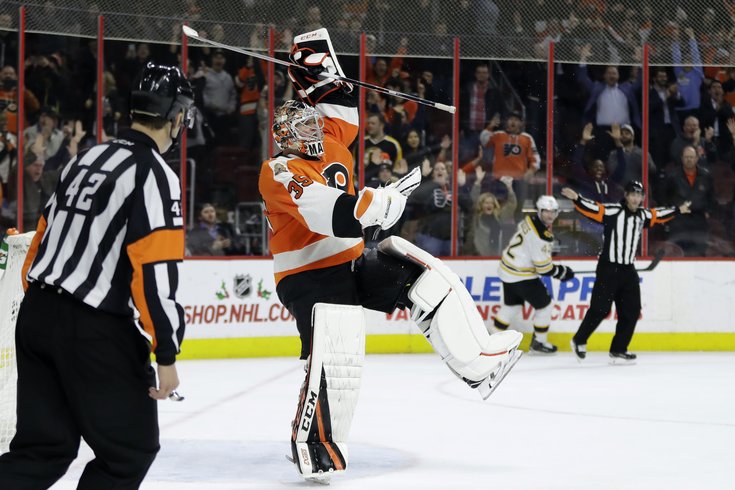 Philadelphia Flyers goalie Steve Mason celebrates after stopping a shot by David Backes during their shootout win over the Boston Bruins.

Flyers goalie Steve Mason has been working extra time lately with backup Michal Neuvirth injured. And boy has it paid off.

After struggling early on while playing in a rotation, albeit one that favored the 28-year-old in terms of number of starts, Mason has played much better recently thanks to a more consistent schedule now that prospect Anthony Stolarz is behind him instead of a proven vet in Neuvirth.

And on Monday, Mason was recognized for his hard work -- and, more importantly, the results of said hard work -- by being named the NHL's First Star of the Week.

"It’s a great honor," Mason said during a conference call following the announcement. "Obviously there’s so many great players throughout the league that can have great weeks from time to time. I think as a whole the team’s on a roll right now and I’m a benefactor of that with the strong play in front of me.

Through his first 10 games of the season, there was reason for concern. But in his 11 games since Neuvirth went down with a knee injury, including starts in 10 of the Flyers' last 11 games, Mason has looked totally different.

It's not a coincidence that playing more often has yielded better results Mason, who is in his fifth season with the Orange and Black. And he's well aware of the correlation.

"There was a lot of talk about a tandem at the beginning of the year," Mason said. "Does it build your confidence knowing that net is yours right now? Yeah, absolutely. I don’t think it’s any goaltender’s goal to play in a tandem. Everybody wants to be a number one guy who plays night in and night out, and that’s exactly what my goal is here to have moving forward. I think continued strong play will help with that."

The Flyers (14-10-3), who are now in playoff position thanks to a five-game win streak, have fed off the play of their goaltender. Or maybe it's been the other way around. No matter how they got there, there's no denying the Flyers have raised their level of play after an underwhelming start to the season.

"I think the team as a whole is just playing a little bit tighter in our defensive zone as of late and making the goaltender’s read that much more simple," Mason added. "Right now think there’s a real comfort level with the guys in front of me just because of the amount of hockey I’ve played lately, and I’m looking forward to keeping it moving. Winning five in a row is nice and we’d like to keep making ground in the standings."

And while this sudden turnaround is good news for Flyers fans, it's even better news for Mason, who will be seeking a new contract at the end of the season.

"It being a contract year, you want to have a strong year," he said. "Just like any other year, but there’s obviously more emphasis with the talk of the contract and everything. I’ve done a pretty good job of blocking that out of my mind right now, and whatever happens, happens.

"If Philly wants to have me here long term, that would be awesome, but at the end of the day, I’m not really focusing on that right now. The main focus right now is just to continue helping the team out here."

He'll likely be back out on the ice Tuesday night when the Flyers, looking to win their sixth straight, host the Florida Panthers at the Wells Fargo Center.