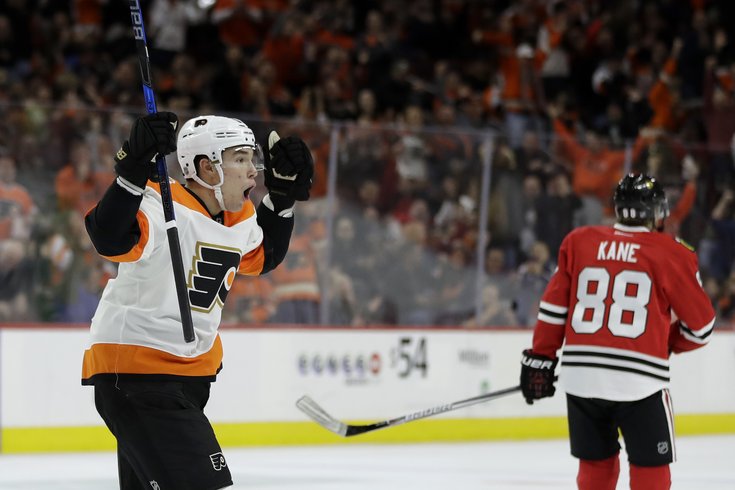 Philadelphia Flyers defenseman Ivan Provorov celebrates after scoring on of his two goals against the Chicago Blackhawks.

A couple of teenagers decided to put on a show at the Wells Fargo Center on Saturday afternoon.

The 19-year-old Russian recorded the first two-goal game of his young career, giving him 11 points on the season (3 goals, 8 assists). The first came with the Flyers trailing 1-0 early in the second period.

But Provorov didn't waste any time turning a 1-1 tie into a 2-1 Flyers' lead -- his second goal game just 31 seconds later.

That wouldn't be all for the Flyers in period No. 2.

About five minutes later, their other 19-year-old rookie, Travis Konecny found Brayden Schenn on a 3-on-2 to increase their lead to two goals. Schenn may have been the one credited with the goal, but it was all about the pass from Konecny.

What a pass by Konecny. pic.twitter.com/h3awe6yRPY

But wait, there's more. Near the end of the second period, Provorov made a play that wound up being nearly as important as either of his goals. Just when it looked like Chicago was going to make it a one-goal game heading into the third, Provorov saved the day.

Not only did he make the diving play, but his glove covered the puck in a way that prevented the officials from conclusively determining whether or not it crossed the line.

The Flyers held on to win, 3-1, to pick up their fourth straight win. Steve Mason stopped 26 of 27 shots in the victory.

While Temple's football team was off winning the AAC Championship, Eric Semborski, who played for the Owls club hockey team from 2011-2015, was down at the Wells Fargo Center for Flyers-Blackhawks. And not because he was a fan.

Semborski, a 23-year-old Bloomsburg native, signed an amateur try-out contract with Chicago on Saturday after starting goalie Corey Crawford had to undergo an emergency appendectomy, leaving the Blackhawks without an emergency backup goalie for their game against the Flyers.

Here's more from Owen McCue of The Temple News:

“Today is Eric’s dad’s birthday and his dad got a call around 11 a.m. from a very excited Eric,” Sembroski’s mother, Stacy Lynn Semborski told The Temple News in a Facebook message. “Apparently the Blackhawks had no backup goalie. I don’t know the circumstances of being up to this last minute situation, but the Flyers called Eric and said, ‘Grab your gear you’re suiting up.'”

Semborski played for Temple’s club ice hockey team from 2011-2015. Semborski was seen on the ice during warmups wearing his Temple goalie mask. He wore Crawford’s No. 50 jersey with “Semborski” stitched across the back.

“It is surreal that they thought of Eric,” Stacy Lynn Semborski said. [Temple News]

Semborski didn't see any action during the Flyers' 3-1 win, but still a pretty cool experience for the local kid.