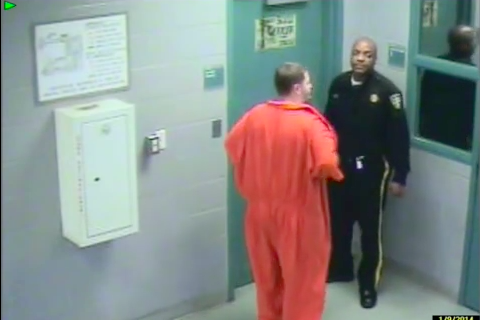 The video below depicts a violent confrontation in January 2014 between guard Tyrone Glover and inmate John Steckley. The video does not contain audio, and while it appears Steckley may have verbally provoked Glover, the footage shows that the physical altercation was initiated by Glover.

In an article anticipating the pope's visit to the correctional facility on Sunday, CityLab writer Daniel Denvir, who originally obtained the video for City Paper, confirmed that Glover resigned after an investigation. Prison officials, City Paper reports, declined to say what the investigation found or if Glover faced disciplinary action.

The incident was one of two alleged beatings in which Glover had been implicated. Last September, Denvir reported on testimony from several witnesses describing the alleged beating of another inmate, Marcellus Temple, in plain view of prison visitors. In both cases, the inmates were initially charged.

Meanwhile, in an open letter to Pope Francis, the Marshall Project, a nonprofit news organization focused on the U.S. criminal justice system, has called for more concerted efforts to clean up the problems plaguing Philadelphia's prisons, which it argues are indicative of the need for reform at the national level.