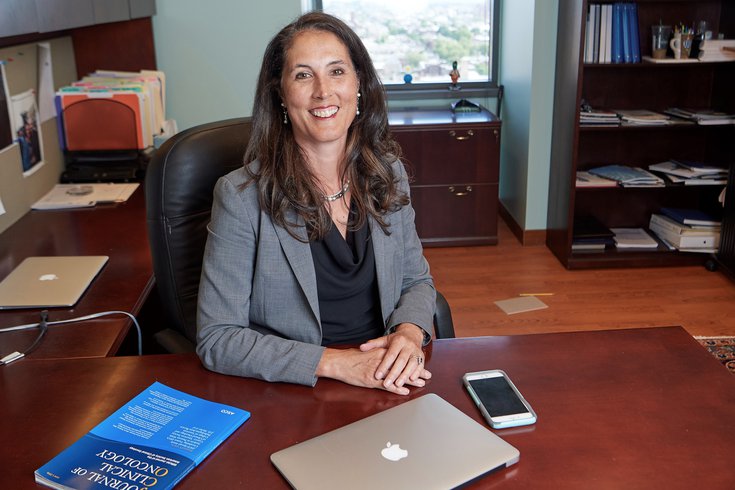 Karen Knudsen, an executive at Jefferson Health, will take the reins as the American Cancer Society's top executive on June 1.

Karen Knudsen, a cancer researcher who ascended to serve as an executive at Jefferson Health, has been tapped to head the American Cancer Society.

Knudsen will become the first female CEO in the organization's 107-year history when she begins her role on June 1. She also will be the first cancer scientist to hold the position in modern times.

Knudsen has served as the executive vice president of oncology services and enterprise director for Jefferson's Sidney Kimmel Cancer Center since 2015.

At the Sidney Kimmel Cancer Center, Knudsen oversees all aspects of cancer research and cancer patient care at its 13 sites in the Philadelphia region. Under her leadership, the center has been ranked one of the top cancer centers in the country by U.S. News & World Report.

Her research has focused on developing new ways to treat advanced cancers, including understanding cell cycle, hormonal and DNA repair alterations that contribute to disease progression. She also holds joint appointments in the departments of urology, medical oncology and radiation oncology.

Knudsen will take the reins from Gary Reedy, who has served as the American Cancer Society's CEO since 2015. Reedy, who is retiring, previously was a business executive at Johnson & Johnson.

"As director of the Sidney Kimmel Cancer Center at Jefferson Health, I've experienced firsthand how the American Cancer Society improves the lives of cancer patients and their families through discovery, advocacy and direct patient support," Knudsen said in a statement.

"I share the board of director's vision to ensure that ACS's impact benefits all people throughout the nation. With creativity, innovation and novel partnerships, we will accelerate the mission and save lives."

Knudsen is joining the American Cancer Society at a time when financial support for the organization continues to decline. Public support eclipsed $1 billion in 2007; now that support is about $500 million, according to The Cancer Letter.

In an interview with The Cancer Letter, Knudsen said the American Cancer Society has had an "incredibly positive impact" on the Sidney Kimmel Cancer Center. Despite the organization's challenges, Knudsen said she is joining because she shares its vision that lives can be improved through cancer research, direct patient support and advocacy efforts.

"I also think there's a sense of urgency that's going to help ACS in this next phase, as we start to emerge from the pandemic, we hope," Knudsen said. "We know that there are thousands of individuals in the U.S. who skipped screenings that are going to present."

She added, "We're starting to see this now — patients presenting with more advanced disease. ACS has a long history of promoting patient education as part of their support mission, and promoting screening events."

As CEO of the American Cancer Society Action Network, Knudsen also will be advocating for public policy change to ensure that cancer is a priority for the U.S. government. It is a role she knows. As president of The Association of American Cancer Institutes, she has advocated for research funding and patient access to research innovations.

Knudsen is also the president of the Association of American Cancer Institutes and serves on the board of directors for the American Association of Cancer Research, where she focused on diversity and inclusion.

She also is actively involved with the National Cancer Institute and the American Society for Clinical Oncology — and has served as a contributor for PhillyVoice, sharing important information about cancer prevention and treatment.