Can we apply Andy Reid's stance on players with domestic violence history to the Eagles? 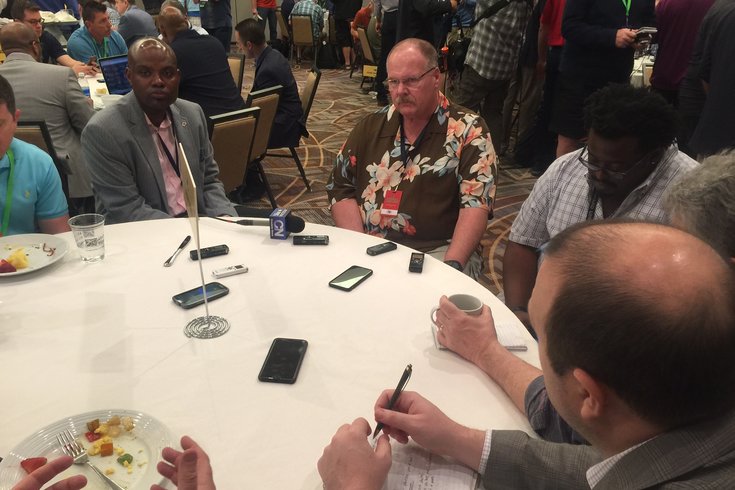 Andy Reid is thrilled to be speaking to Philly reporters once again.

PHOENIX – No, Andy Reid isn't the coach of the Philadelphia Eagles anymore, and he doesn't make decisions for them presently. However, if you haven't noticed, the Eagles have made efforts in many ways to get back to the way things were run when he was the guy in charge. And so, when Reid speaks in terms of philosophy, it's perhaps worthwhile listening to what he has to say.

At the NFL Annual Meetings in Phoenix on Tuesday, Reid spoke to reporters for an hour or so, and he was asked about his success in bringing in character issue players, seeing as several prospects this year, such as Dalvin Cook, Joe Mixon, and Dede Westbrook, among others, have questionable pasts.

As a reminder, Reid and the Eagles decided to give Michael Vick a second chance after he was released from prison for dogfighting. In Kansas City, Reid drafted electrifying wide receiver Tyreek Hill in the fifth round of the 2016 NFL Draft. Hill was arrested in 2014 on domestic violence charges for choking his pregnant girlfriend.

"We (drafted) Tyreek Hill," Reid said. "The thing we did is, we tried to do as much homework as we could, to see if there was a second chance available there, that possibly we would give him that. We’ve had players we’ve done that with. My wife is very involved in that part of things, with spousal abuse and that. I talked to her about that situation when we had Tyreek, and as long as they’re working toward bettering themselves and they’ve got some kind of foundation there, you can possibly take that chance."

Speaking about Mixon specifically, Reid said he hasn't spoken with him, but once again spoke generally about players with a history of domestic abuse.

"I don’t know this kid at all," he said. "I haven’t talked to him. I really haven’t even seen the video. I trust you (that it’s ugly). I understand. I’ve seen enough of those kinds of videos. But the one thing that being involved in Laurel House, like we were, I saw guys that didn’t try. They didn’t try to fix the problem. And so, I don’t know what this kid is doing. I haven’t studied him at all, but there’s a decent success rate of the ones that do. They get themselves on the straight and narrow, and then handle women the right way, and do it the way they’re supposed to do it."

So how does Reid determine if they're "trying" or not? He expanded.

"What are they doing to fix the situation? What kind of counseling are they getting? How long has it been? Are they staying consistent with it? And then talking to the kids. You have to look at them eye to eye and see what’s going on.

On Monday, we wrote that Mixon is a perfect fit for Eagles' offense, football-wise, but wondered if they would consider drafting him. Last year the Eagles drafted Jalen Mills, who was arrested for battery of a woman in 2014. Right or wrong, if the Eagles adopt Reid's philosophy on players with a history of domestic violence, then they are unlikely to summarily eliminate Mixon or any of the other draft prospects with domestic violence history without digging deeper on them.