Chip Kelly was going to turn the Philadelphia Eagles into the football team of the future, until it turned out he was extremely bad at both evaluating and coaching NFL talent.

A great number of Eagles fans still harbor resentment about Kelly's dismantling of a pretty solid football team, and also his smarminess, and often revel in his successive failures since being fired as head coach of the Eagles in 2015.

In that vein, here's a story about a disgruntled UCLA fan who is so sick of Chip Kelly, who now coaches the Bruins' football team, that he created a Craigslist listing selling Kelly himself: 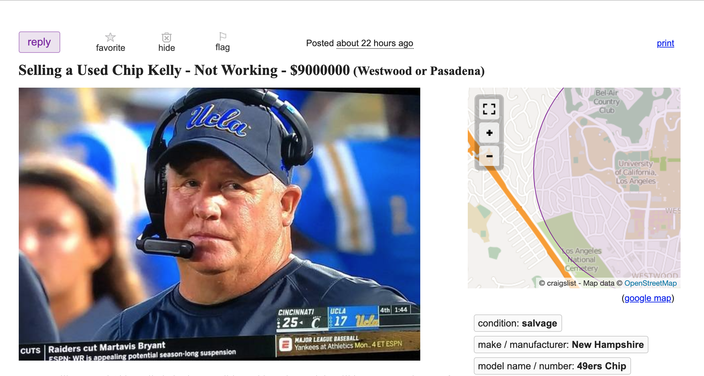 "Selling a Used Chip Kelly - Not Working - $9000000" reads the listing's title, which was still active Tuesday afternoon, roughly 22 hours after it was posted in the Los Angeles Craigslist.

The description rips Kelly, claiming he's in "broken condition", calling him an antique, and reminding everyone that "its previous owners were also dissatisfied with it".

This line will probably trigger some PTSD for Eagles fans who wanted to see years of DeSean Jackson, LeSean McCoy, and Jeremy Maclin balling out together:

"We imagine you can find some workable pieces in here if you are looking for 5-tight-end play designs and are in need of tearing down your roster to its bones."

That sounds about right.

Kelly's Bruins had a really cool comeback win over Washington State earlier this year, but otherwise his tenure at UCLA has been abysmal: he's 4-14 overall, including a 4-8 conference record. If you combine his UCLA overall record with his record as the head coach of the 49ers, Kelly has won six football games and lost 26 since being fired by the Eagles.