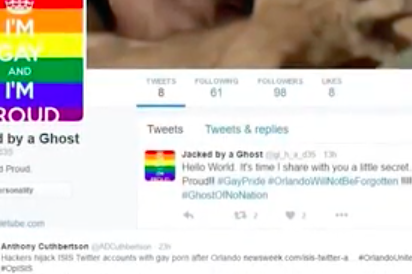 In the wake of last week's massacre at the Pulse gay nightclub in Orlando, the Anonymous hacker collective decided to exact a bit of revenge on terrorist organization Islamic State.

Despite indications from the FBI that gunman Omar Mateen was a homegrown extremist, ISIS claimed responsibility for the attack based on a call Mateen made to the club in which he pledged his allegiance to the organization.

On Wednesday, numerous Twitter accounts affiliated with ISIS were flooded with messages expressing gay pride, according to Newsweek.

An Anonymous member who works under the moniker WauchulaGhost took control of multiple accounts to spread the message. He said he's been hacking ISIS Twitter accounts for several months now and plans to continue doing so with a pair of associates.

In one instance, WauchulaGhost posted the following message on an account holder, @gi_h_a_d35, whose user name he changed to "Jacked by a Ghost":

In a video released after the Paris terrorist attacks last November, Anonymous stated its intention to carry out cyber attacks on ISIS.

"We are furious with the repeated slaughter of innocent citizens in the name of a peaceful religion, you clearly don’t respect you (sic) beliefs. And you clearly have no respect for human life and evolution. We are coming to get you, we will be hitting you harder than ever.”

In the immediate aftermath of the attack, a prominent Anonymous account declared the collective would stop fighting ISIS online. That message was not embraced by all members and some, including WauchulaGhost, swiftly took vigilante action on social media.

You do not fight ISIS on the internet, you defeat them through unity in stead of creating the division they want. 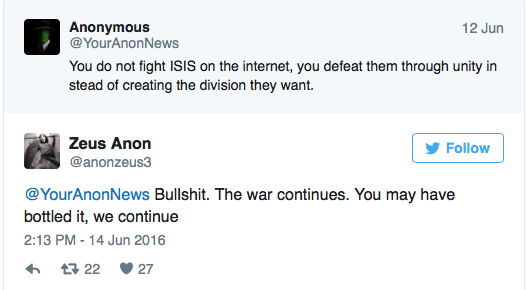