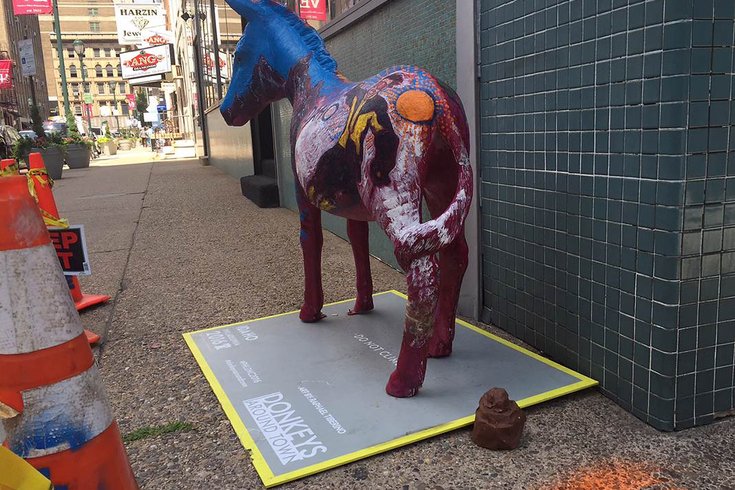 This Idaho donkey, one of 57 fiberglass creations by local artists for the 2016 Democratic National Convention, was the target of fracking opponents who "added" to the artwork to express their displeasure with the Democratic Party's failure to include a ban on fracking in its platform. The donkey is at 7th and Sansom streets on Jewelers Row.

A group of anti-fracking activists used the 57 fiberglass donkeys scattered across Philadelphia for the upcoming Democratic National Convention to make a point about the party's "crappy" platform on the technique used to extract natural gas from the earth.

The Food & Water Watch group said in a press release Tuesday that it used washable paint and fake poop to call attention to the Democrats' "failure to call for a ban on fracking in the party platform."

"No animals were harmed in the making of this action, but the harm caused by fracking is very real, " Sam Bernhardt, senior organizer at Food & Water Watch, said in the release.

"Political leaders should heed the call to keep fossil fuels in the ground and join the Clean Energy Revolution."

The party's presumptive nominee, Hillary Clinton, has said she supports states and local communities that do not want fracking and their individual efforts to ban it locally but has not called for a total ban on it.

We didnt get our #banfracking amendment in DNC platform so Philly @foodandwater made our own amendment 2 DNC donkeys pic.twitter.com/wfXwxp9Q8v

Her main rival for the nomination, Bernie Sanders, who is expected to endorse Clinton, has argued for a full ban on fracking.

Sanders supporters expressed disappointment at a recent meeting to decide the party's platform after a call for a total ban on the practice failed.

The group said the stunt was done to raise awareness for its upcoming march in Philadelphia for clean energy, which is set to take place on July 24, a day before the convention begins.