Lakewood's mayor said the community "will not tolerate that sort of behavior." 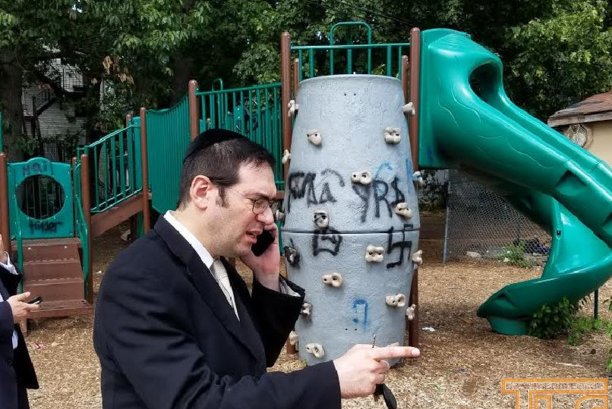 Anti-Semitic messages were found graffitied at a playground of a Jewish school in New Jersey Friday.

Police are investigating an incident after anti-Semitic messages were found graffitied at a Jewish school in Lakewood, New Jersey.

The Lakewood Police Department is now looking for the vandals who committed the crime, NJ.com reported. Swastikas and phrases like "Hail [sic] Hitler" were scribbled at the playground and on the walls of the Yeshiva Ketana School which is now used as a summer day camp.

"Lakewood Township and its police department take bias crimes very seriously,” Mayor Menashe Miller told The Lakewood Scoop. “It is obvious that someone is trying to intimidate a particular segment of the community and we will not tolerate that sort of behavior.”

Attempts Friday afternoon to reach to the Lakewood Police Department were unsuccessful. More photos of the incident can be found in The Lakewood Scoop.

The graffiti was found by kids playing at the playground and police said they're checking spray cans left nearby for fingerprints. Police have been working with the township and building owners to get the messages erased.

"This is the second incident we've had since July," Lakewood Police Lt. Greg Staffordsmith told 6ABC. "We don't know if they're related but, will do our best to find out."

The Associated Press also reported that Havertown police are investigating a similar incident. A Jewish woman found a swastika graffitied on her trash bin last week. Now, her neighbors are showing their support by painting flowers, birds and other positive images in its place.

"It's not like someone wrote some obscenity on my trash can or gave me the finger," she said in an interview Thursday with AP. "The swastika is such a deep-rooted sign of hatred for everyone, especially Judaism, that I felt so targeted."