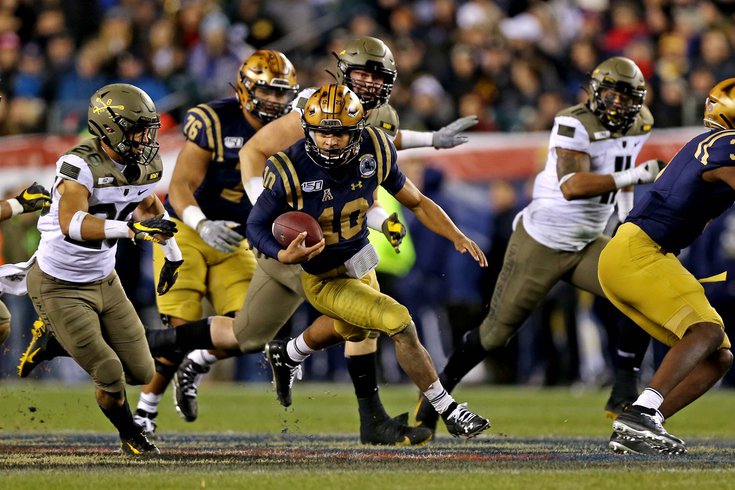 Lincoln Financial Field has hosted the Army-Navy Game 13 times, including last year’s 31-7 win by the Midshipmen.

The 121st annual Army-Navy game will not be taking place at Lincoln Financial Field because Philadelphia's gathering limits would prevent the entire Corps of Cadets and Brigade of Midshipmen from attending.

The game instead will be held at West Point on Dec. 12, the military institutions announced Friday.

Philadelphia is only allowing outdoor venues with capacities greater than 2,000 to permit up to 15% occupancy – with a 7,500-person cap.

This is the first time the Army-Navy game will not be played on a neutral field since World War II, when both branches hosted the game in 1942 and 1943. Navy leads the all-time series, 61-52.

Because Army is the designated home team for the 2020 matchup, the game is being moved to Michie Stadium at West Point.

"We want to thank the city of Philadelphia, the Eagles and all involved in the planning for their efforts to navigate this historic game in the current COVID-19 climate," Army Athletics Director Mike Buddie said. "We are excited about this historic opportunity to host Navy and the Brigade inside the gates of West Point for the first time since 1943."

Lincoln Financial Field has hosted the Army-Navy Game 13 times, including last year’s 31-7 win for the Midshipmen. The two schools are scheduled to return to the Linc for their matchup in 2022.

No city has held the annual contest more often than Philadelphia. The game has been held 89 times at Lincoln Financial Field, Veterans Stadium, Franklin Field or JFK Stadium.

"Unfortunately, we will not be allowed to visit the home of Army-Navy this December," Navy Athletics Director Chet Gladchuk said. "Every effort was made to create a safe and acceptable environment for the Brigade, the Corps and our public while meeting city and state requirements. However, medical conditions and protocols dictate the environment in which we live."