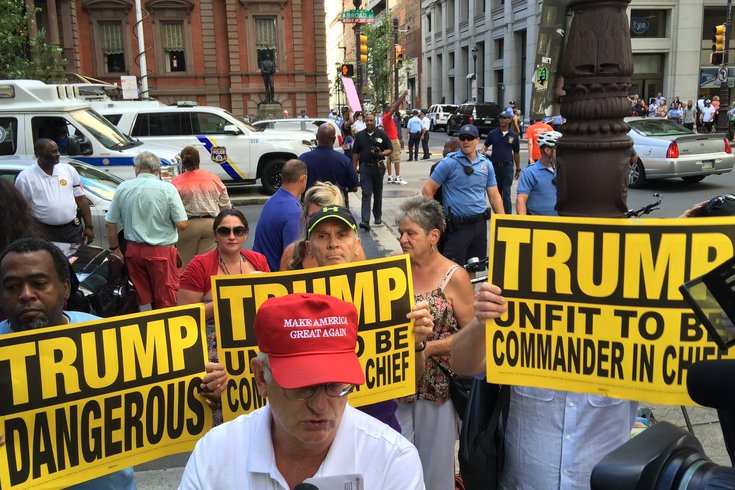 Dr. George Petruncio, a Donald Trump supporter, in foreground, spoke about Obamacare as protesters made themselves heard on Sept. 7, 2016 outside the Union League on South Broad Street in Center City Philadelphia. Trump was giving a campaign speech at the club.

Cities that hosted Donald Trump rallies during the 2016 presidential campaign experienced an uptick in assaults, according to a study conducted at the University of Pennsylvania.

Researchers found that cities recorded 2.3 more assaults than average when the Republican visited. By contrast, Hillary Clinton rallies were not linked to any increase in assaults.

"News media sources reported there were violent incidents at some campaign rallies, but it was difficult to gauge whether there really was a systematic problem, and if so, how many additional assaults were associated with each rally," lead researcher Christopher Morrison said in a statement.

The study, conducted by a team at the Perelman School of Medicine, was published Friday in the trade magazine Epidemiology.

It focused on campaign rallies held at cities with more than 200,000 people. Researchers counted the number of aggravated assaults, simple assaults and battery reported by police in each of those towns on the days of the rallies. To compare to a typical day, they also tabulated assaults on corresponding days of the week for four weeks before and after the rally.

The study defined rallies as open invitation events that featured a speech by the candidates and were not held on the same day as a party primary election in the same state. They looked at rallies from the moment they declared their candidacies in 2015 until the election.

"This research provides evidence that this increase in assaults is associated with candidate Trump's rallies leading up to the election," researcher Douglas Wiebe said. "Violent language may have affected the mood and behavior of rally attendees, as well as those exposed to the rally through news reports and social media."