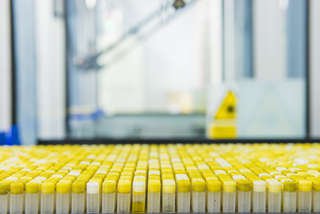 The COVID-19 vaccine developed by AstraZeneca and the University of Oxford is still in Phase 3 trials in the United States and isn't expected to be submitted to U.S. Food and Drug Administration for emergency authorization until March.

A new study indicates the COVID-19 vaccine developed by AstraZeneca and the University of Oxford has reduced efficacy against the coronavirus variant first discovered in South Africa.

The data, which shows the vaccine provides minimal protection against mild disease caused by the variant, has prompted the South African government to pause its rollout of the vaccine.

"When we analyzed individuals in terms of how well the vaccine worked against the variant, there was very little difference between the vaccine group and placebo group," Sahbir Madhi, one of the clinical trial investigators, said in a briefing Sunday.

According to the New York Times, 19 of the 748 people in the vaccine group were infected with the South African variant, formally known as B.1.351. By comparison, 20 of the 714 people in the placebo group became infected.

In the United States, the AstraZeneca vaccine is still in Phase 3 trials and isn't expected to be submitted to the U.S. Food and Drug Administration for emergency authorization until March. The U.S. has agreed to buy 300 million doses of the vaccine, if authorized.

It is unclear whether the new data will affect the American authorization process. The B.1.351 variant also has been detected here. According to the University of Oxford, scientists already are developing a second generation of the vaccine, which is being adapted to variants similar to B.1.351.

"We are working with AstraZeneca to optimize the pipeline required for a strain change should one become necessary. This is the same issue that is faced by all of the vaccine developers, and we will continue to monitor the emergence of new variants that arise in readiness for a future strain change."

So far, both the Pfizer and Moderna vaccines, the only two vaccines authorized by the FDA, remain protective against the South African variant, though at reduced levels. Moderna also is exploring the potential benefits of a booster shot.

The study of the AstraZeneca vaccine included 2,000 volunteers. The average age of the participants was 31. Half of them received the vaccine and half received a placebo.

The analysis showed the vaccine had high efficacy against the original coronavirus, but its efficacy significantly dropped when tested against the B.1.351 variant.

The researchers didn't evaluate the vaccine's ability to prevent severe COVID-19 caused by the variant, and it is important to note that the preliminary data hasn't been peer reviewed or published.

"This study confirms that the pandemic coronavirus will find ways to continue to spread in vaccinated populations, as expected," said Andrew Pollard, professor of pediatric infection and immunity and chief investigator on the Oxford vaccine trial.

"But taken with the promising results from other studies in South Africa using a similar viral vector, vaccines may continue to ease the toll on health care systems by preventing severe disease."

A study sponsored by Janssen assessed the vaccine's ability to prevent moderate to severe disease. Its data, published as a preprint in The Lancet, was more promising.

"Recent data from a study in South Africa sponsored by Janssen which assessed moderate to severe disease, rather than mild disease, using a similar viral vector, indicated that protection against these important disease endpoints was preserved," Madhi said in a statement.

That study also showed that the vaccine potentially slows coronavirus transmission as well.