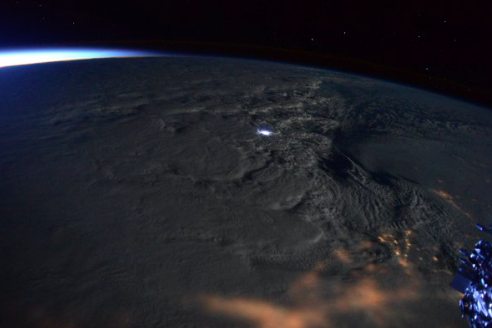 Here on Earth, the northeastern United States was pounded this weekend by winter storm Jonas, which deposited nearly two feet of snow in Philadelphia and produced severe flooding along the New Jersey coastline.

It was a very different scene from the International Space Station, where celebrity astronaut Scott Kelly, currently on a record-breaking 340-day stretch aboard the satellite, has been sharing amusing videos of his exploits over the course of the past year.

According to Space.com, Kelly took a series of snapshots of the blizzard as it barrelled across the U.S. and blurred the lights from cityscapes below.

As #blizzard2016 passes over #Chicago, the #EastCoast seen in distance clearly has a long way to go. #YearInSpace pic.twitter.com/qMrkTXo9ie

Several hours after his initial post, Kelly caught a rare glimpse of a weather event known as a "thundersnow," which is a winter thunderstorm with snow instead of rain.

Kelly, a native of West Orange, N.J., was the subject of an AMA on Reddit yesterday. He was probably much happier to be in space this weekend than back home with his family. Better to be Thunderstruck than snowed in.