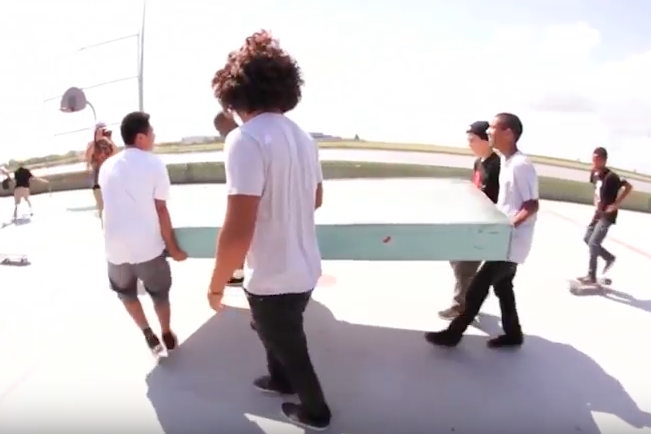 Skaters move box at former Back Sov, a D.I.Y park demolished on March 29, 2017, in Atlantic City.

Skateboarders in Atlantic City are raising funds to rebuild a new, city-approved park in the wake of Wednesday's demolition of a pop-up park that had served locals for the past two years.

Led by 28-year-old resident Jason Klotz, the GoFundMe campaign has already surpassed its goal of $3,500 as the community of local skaters seeks the help of Philadelphia's Jesse Clayton, who constructs skate parks for a living.

The old park, built by locals at an older roller rink located on Sovereign Avenue, was razed because it wasn't insured and didn't have a permit from the city. Exactly who ordered it to be torn down on Wednesday — the state of New Jersey took control of the struggling resort town in November — remains a matter of dispute, according to the Press of Atlantic City.

In the campaign video below, Klotz explains that he met with Atlantic City Mayor Don Guardian to get plans in motion for a new park nearby.

"The city is giving us permission to relocate a big batting cage that they have in the middle of the court," Klotz wrote on the GoFundMe page. "That will be the location where we want to put a big obstacle with two pyramid corners, 2 euro gaps. 2 hubbas, and a bank to ledge all in one obstacle."

Klotz said the new park will be professionally built, adding that he hopes it will help bring positivity to a city facing an uncertain future.

"Atlantic City is suffering economically, spiritually, culturally, and recreationally," Klotz wrote. "We want to promote and create all of these things with this park by holding events but mainly by providing an everyday community and culture of recreation, mindfulness, and peacefulness."