Save the baby alligator found strolling through Montgomery County 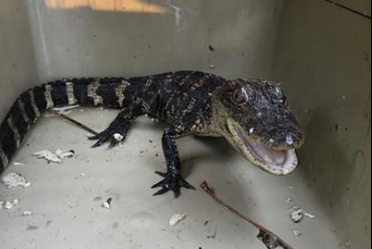 Authorities in Collegeville say they have corralled a baby alligator who was discovered taking an afternoon walk through their placid borough in central Montgomery County.

Not to get all David Icke about this, but scientists have by now reached a "critical consensus" that non-human animals — in particular, birds and mammals — do possess consciousness. Reptiles are generally considered less than brilliant creatures, but veterinary researchers have found strong evidence that they have some basic emotions (see here, here, here, here and here). In the wild, these are often expressed as aggression, but certain pets (your turtles, lizards, snakes, even gators) do seem to grow fond of their owners, like so.

Why was this baby gator, who police say is not a wild one, cast away in this reckless manner? What was he/she feeling in this moment of abandonment?

We reached out to La'Toya Latney, DVM, service head of the Exotics Department at Penn Vet Animal Hospital, to get some answers about reptilian emotions.

"They have a pretty intricate network of behaviors that are not linked to survival," Latney said. "There are a number of cognition studies that show that turtles will help other turtles that have been flipped upside down to get them right side up. They sometimes have play behaviors. People assume that's not true because of their general portrayal, but sometimes reptiles have higher levels of cognition than avian species. Monitor lizards can count up to six. I don't see many birds doing that."

Could it be that this baby gator in Collegeville, dimly aware of knocks on the reptilian intellect, struck out in search of an education at Ursinus College? Let us not forget that reptiles have their very own Socrates: Philosoraptor. 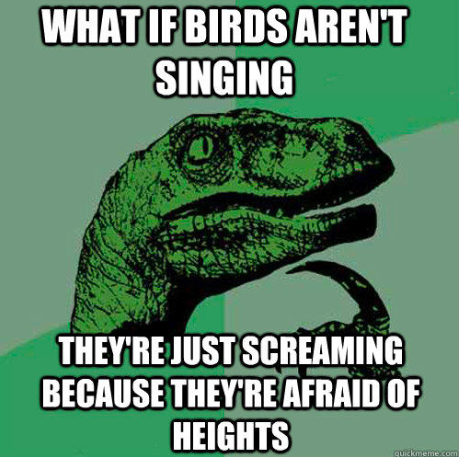 For all this baby gator knew, Ursinus could possess the original tomes of Philosorapter (there's a far better GIF version of this, btw).

Instead, our baby gator friend got busted by the police. Now what? Pennsylvania law is not really looking out for baby gator. Only human empathy will spare him or her. See for yourself, the law:

The PA Fish and Boat Commission’s regulations do not regulate possession of non-native species of reptiles and amphibians. So long as these animals are not released into the wild, there are no state regulations regarding their ownership. Likewise, there is no state permit required to possess these animals. However, there may be local municipal ordinances, which regulate the ownership of “dangerous animals” and you should check with your local government before purchasing such an animal.

This is just the kind of catch-22 Philosoraptor would have something to say about. If you take in a baby alligator, and it continues to grow, what exactly are you supposed to do with it when it's a monstrous predator?

"Poor little dude," Latney said. "Based on the stripe pattern he has, he looks like a juvenile American alligator. At a certain point, they lose their stripes, but it's possible his caretaking affected his physical development."

A zoo might take baby gator in, sure, but that's not a definite. Lucky Allen the alligator, who in June was found in the waters of Allentown's Lehigh Canal, was captured and adopted by Pocono Snake and Animal Farm, where he's probably plotting an Orwellian revolt against his negligent former owner, for all we know.

"Reptiles do prefer to be in the presence of certain people, without it being related to food," Latney said. "There are many studies that confirm this. We look at these things by testing spatial recognition and task complexity. Any reader can find these studies on Google Scholar. I also recommend NOVA's special, 'Lizard Kings.'"

Latney explained that situations like baby gator's are incredibly frustrating for "herpers" like herself — herpatologists, i.e., people who study reptiles and amphibians — because they stem from poor choices that ultimately overwhelm shelters and zoos.

"Pennsylvania has such lax ownership rules for reptiles," Latney said. "We're one of the few states where you can own venomous reptiles. It's not uncommon for people to get them at an exotic reptile show, or have one shipped across state lines by a hobbyist, and then the animals outgrow the caretaking set-up. We're bleeding hearts, so we do what we can for displaced animals, but there are many concerns that go into it. We have to think about infectious disease and quality of life. Many of us try to educate people about thinking carefully before taking home a reptile."

It's clearly necessary. The very first comment on Collegeville PD's post is almost too horrifying to bear.

"He'd prolly be good on [a] stick over a campfire though!" exclaimed Jason Cary.

Other commenters were much kinder, expressing hope for the best outcome and making some suggestions. One woman was sickened by the fact that baby gator's teeth were seemingly removed from his mouth.

Latney said the missing teeth are an unfortunate, but not devastating, handicap for baby gator.

"These guys pre-date dinosaurs, I always try to remind people. They adapt to amazing things. From a physiological standpoint, once he's big enough, I think he could thrive in a sanctuary, even with the dentition issues," Latney said. "He can swallow prey whole, and alligators have an immaculate digestive system. There's a specialized, zoological pellet diet for him."

"He should receive that at a local PSPCA. That's the authoritative body that should handle his case, by law."

After that, there are some options. Latney said that in the past, places such as the Natural Academy of Sciences have temporarily housed and rehabbed animals like baby gator. Once he/she reaches a certain weight and length, he/she can be taken to a sanctuary in Florida to live out his/her days in peace and tranquility.

"He needs to be able to bask in the sun, have a safe environment and eat," Latney said. "Those are the basic quality of life factors for him. His stress needs to be kept limited. And yes, his brains needs enrichment just as much as his body."

So, what happens now? A call to the Collegeville Borough Police Department requesting a comment on the status of baby gator was not immediately received and returned. There was some serious phone tag.

It looks like what we need here is a petition to save baby gator. It's really that simple. Collegeville, this is your baby gator, take him/her or leave him/her. It's up to you to see to it that baby gator lives a long and healthy life.

We as Homo sapiens tout our species as an evolutionary miracle, the pinnacle of earthly creation. Will we now forsake our halcyon past?