By Pat Ralph
PhillyVoice Staff
Basketball Hall of Fame
from 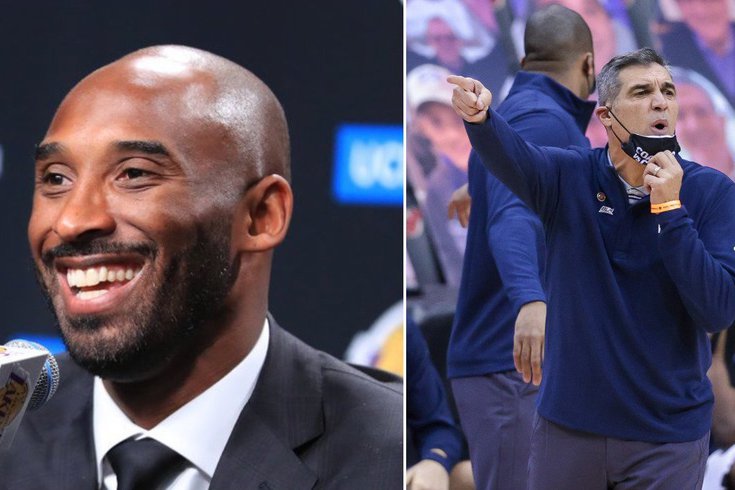 Kobe Bryant was officially inducted into the Basketball Hall of Fame on Saturday, while Jay Wright will be enshrined later this year.

Kobe Bryant was finally inducted into the Naismith Memorial Basketball Hall of Fame as the institution's nine inductees for the class of 2020 were honored during Saturday's enshrinement ceremony at Mohegan Sun Arena in Uncasville, Conn.

Bryant's wife, Vanessa Bryant, spoke on his behalf by giving the Black Mamba a moving and emotional tribute. Fellow Hall of Famer Michael Jordan, who served as a role model, mentor and friend to Kobe Bryant, presented the late basketball legend for induction.

"There will never be anyone like Kobe," Vanessa Bryant said. "Kobe was one of a kind. He was special. He was humble, off the court, but bigger than life."

Vanessa Bryant thanked all of those who helped contribute to her late husband's success both on and off the court, as well as those who have been there for his family since his death last year.

"At the risk of leaving anyone out, I can only say thank you," Vanessa Bryant said. "To all those who helped him get here, you know who you are, and I thank you on his behalf."

Vanessa Bryant said that if her husband were there to accept the honor, he also would've thanked "the people who doubted him and the people that worked against him and told him he couldn't attain his goals."

"He would thank all of them for motivating him to be here," she said. "After all, he proved you wrong."

Vanessa Bryant then turned to her husband's accomplishments on the court, saying that he was "on a different level" from everyone else.

"[Kobe] never took shortcuts when it came to basketball," she said. "He gave this game his all."

But Vanessa Bryant said that her husband's most cherished accomplishment "was being the very best girl dad" to his four daughters.

Vanessa Bryant also talked about how much her husband loved playing for his fans throughout his career.

"Kobe didn't want to disappoint his fans, especially the ones in the 300 sections who saved up to watch him play," she said. "The kids with the same excitement he once had."

"He never forgot about his fans," she continued. "If he could help it, he would play every minute of every game. He loved you all so much."

Vanessa Bryant closed out her 12-minute-plus address by thanking her husband for being a great father, husband and basketball player.

"You did it. You're in the Hall of Fame now," she said. "You're a true champ. You're not just an MVP, you're an all-time great. I'm so proud of you. I love you forever and always, Kobe Bean Bryant."

Kobe Bryant was born in Philly, but grew up overseas as his father continued his own professional basketball career in Italy.

The Black Mamba remained connected to his alma mater after his high school career ended. Bryant was a benefactor to the school, and Lower Merion's gymnasium is named after him.

Bryant was taken with the No. 13 overall pick in the 1996 NBA Draft by the Charlotte Hornets and traded to the Los Angeles Lakers.

During his 20-year-career with the Lakers, Bryant was a five-time NBA champion, 18-time NBA All-Star, two-time NBA Finals MVP and the 2008 NBA MVP. He also won two Olympic gold medals playing for the United States men's national team in 2008 and 2012.

Bryant, his daughter Gianna and seven other people were killed in a helicopter crash in Calabasas, Calif., on Jan. 26, 2020. Kobe Bryant was 41 and Gianna Bryant was 13. The other victims in the crash were teammates on Gianna Bryant's basketball team, their parents and the helicopter pilot.

The enshrinement ceremony for the Basketball Hall of Fame's 2020 class was delayed by a year due to the COVID-19 pandemic. The other eight inductees were Tim Duncan, Kevin Garnett, Rudy Tomjanovich, Tamkia Catchings, Kim Mulkey, Eddie Sutton, Barbara Stevens and Patrick Baumann.

The Basketball Hall of Fame's 2021 class, which was unveiled Sunday, will have even more Philadelphia connections too. Villanova head coach and two-time national champion Jay Wright will be inducted into Springfield later this year.

"We are humbled and grateful to receive this incredible honor," Wright and his wife Patty said in a statement shared on social media. "We are thankful to all those individuals, at Hofstra and Villanova, who have worked with and supported us. At the top of that list are the men and their families who trusted us to coach them. You are always in our hearts."

Players must be retired from basketball for three years in order to be eligible for the Basketball Hall of Fame. Coaches must be retired for three seasons or, if still active, have coached as either a full-time assistant or head coach at the high school, college and/or professional level for at least 25 years. Coaches must also be at least 60 years old in order to be eligible for the Hall of Fame.

Nominees must be voted on and considered by several committees before induction. Any finalist must receive 75% of the vote from the 24-person Honors Committee in order to be inducted into the Basketball Hall of Fame.