Several of the clay relief portraits show the author, inventor and statesman wearing a fur cap; the most prized item in the lot could sell for $8,000 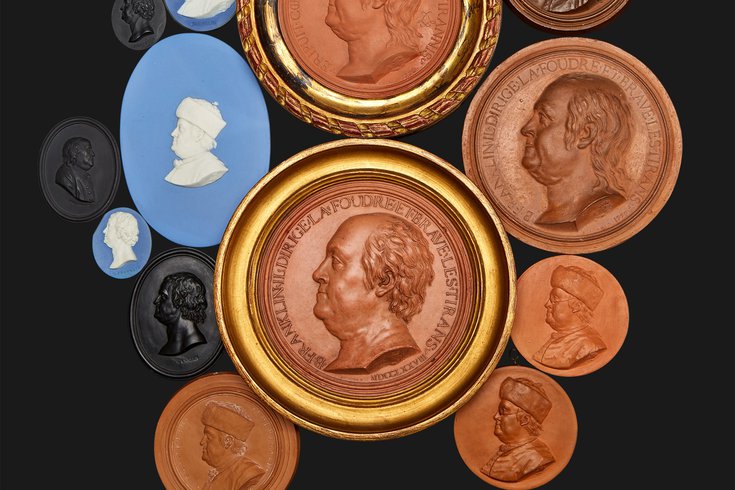 On April 27, Freeman's Auction House in Center City will be selling a collection of clay medallions with relief portraits of Benjamin Franklin made in France in the 18th century while Franklin was working there as a diplomat.

Freeman's Auction House in will be selling terracotta medallions sculpted with portraits of Benjamin Franklin as part of an upcoming auction.

At least one of the medallions is expected to sell for as much as $8,000 and will be auctioned off staring April 27, as part of Freeman's American Furniture, Folk and Decorative Arts auction. Some of relief portraits depict the famous Philadelphian wearing a fur cap.

The antiques are from the 18th century and are linked to around the time when Franklin visited France as a diplomat to build support for the American Revolution. The artist who made the clay medallions, Italian sculptor Jean Baptiste Nini, was working in Paris at the time, CoinWorld reported.

"Perhaps the best-known of the Franklin medallions produced in late 18th century France is this 1777 terracotta by Italian sculptor Jean-Baptiste Nini depicting Franklin in a fur cap," CoinWorld reported about the auctions.

Another of the portrait dates back to 1778 and is believed to only one of six in existence, Freeman's said. So few of these medallions  are exist today, in part, due to a ship that sank carrying the Italian sculptor's creations.

"It is believed that several hundred of the Franklin Nini's were shipped to America in 1779, but were lost at sea in a shipwreck. Few medallions reached the U.S. until the last quarter of the 19th century," Freeman's wrote on its website.

People must register to participate in the live auction. Private, in-person viewings of the Franklin medallions, in advance of the auction, can be scheduled at Freeman's location, at 1600 W. Girard Ave., by emailing the auction house.

Last month, a different auction involving an artifact connected to one of the Founding Fathers took bids for a lock of George Washington's hair that had been preserved in a locket. Bidding at the North Jersey auction house began at $1,000 and the first president's hair ended up fetching $39,000.