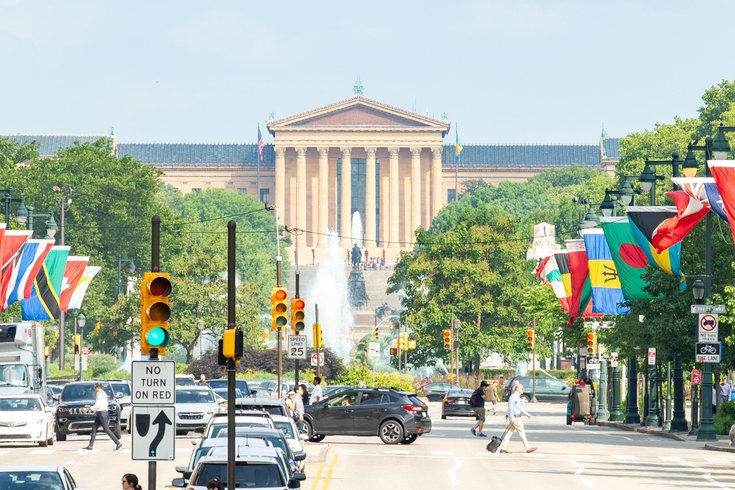 The redesign of the Benjamin Franklin Parkway in Philadelphia is expected to begin in early 2022 and last for 12-18 months.

Design Workshop, a landscape architecture and urban planning firm that has helped develop projects in over 30 countries, has been selected to oversee the revitalization of the Benjamin Franklin Parkway in Philadelphia.

City officials said Wednesday that Design Workshop's proposal to redesign the iconic thoroughfare was selected because it "showed a clear understanding of the importance of creating a renewed sense of place on the Parkway and connections between adjacent public spaces."

The firm was also praised for its multi-year plan to make "realistic" improvements to the Parkway while emphasizing inclusivity and equity, city officials said.

“The Benjamin Franklin Parkway is Philadelphia’s grand boulevard, a historic cultural epicenter that has the opportunity to become a vibrant, bustling public space for all Philadelphians,” Mayor Jim Kenney said. “The team selected to carry out this work is as bold, spectacular and rooted in local pride as the Parkway itself. I encourage Philadelphians to join in on this journey to reimagine what is possible on the Parkway through the lens of Design Workshop’s talented team of public space experts.”

Founded in 1969 in North Carolina, Design Workshop describes itself as "dedicated to creating quality landscapes that meet today’s needs and endure for future generations." The firm has eight studios in the United States and has worked on projects in countries such as Canada, France and Russia.

“We are honored to be a part of this iconic project," Design Workshop's Kurt Culbertson said. "We will collaborate with the people of Philadelphia to co-create an equitable and inclusive future for the Parkway."

Design Workshop will now be tasked with working alongside Philadelphia Parks & Recreation, the city's Office of Transportation, Infrastructure and Sustainability and other local stakeholders to change the function of the Benjamin Franklin Parkway in order to make it more appealing, useful and safer for the public.

Design Workshop was one of 18 teams that submitted a proposal to the city in March to oversee the revamp of the Benjamin Franklin Parkway.

After being selected in June as one of three finalists for the project, Design Workshop went through a five-week public input process over the summer, exploring the Parkway, its history and its current uses. The firm was then tasked with presenting its ideas for how to make the thoroughfare a more vibrant public space.

The restoration project is being supported with funding from the William Penn Foundation in partnership with the Lindy Institute for Urban Innovation at Drexel University and the Parkway Council.

Construction of the Benjamin Franklin Parkway began in 1917 after more than a decade of planning led by retail pioneer John Wanamaker. The thoroughfare, originally named the Fairmount Parkway, is considered among the first examples of urban renewal in the United States.

The boulevard was designed by French landscape architect Jacques Gréber to emulate the Champs-Élysées in Paris, running from City Hall and around Logan Circle until reaching the Art Museum.

Philly launched its "More Park, Less Way" action plan in 2013 to undertake improvements to pedestrian safety and traffic flow, as well as to make public spaces more accessible. Projects in recent years have included the creation of the Winter Street Greenway, the construction of Maja Park, upgrades to Von Colln Park and a series of summer pop-up activities at Eakins Oval.