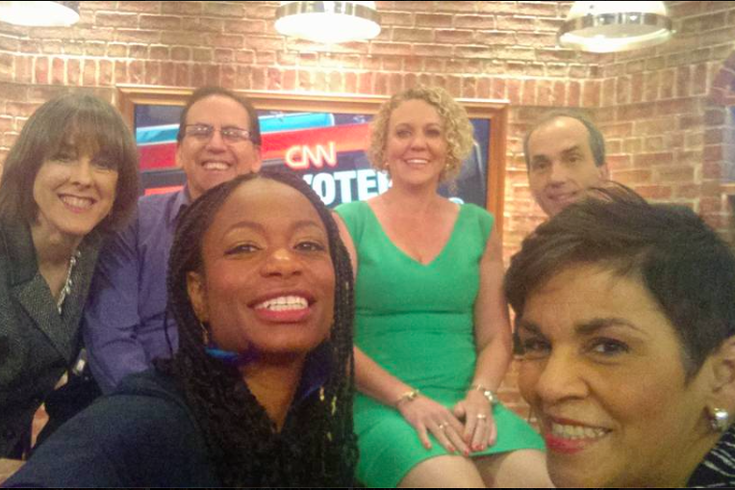 Germantown's YahNé Ngdo (front left in this photo) is the lead face of the national "Bernie or Bust" movement. She maintains Hillary Clinton cannot win the White House.

If Hillary Clinton becomes the presidential nominee in Philadelphia this July, the Democratic Party will hand the White House to Donald Trump, according to YahNé Ndgo, the Germantown resident serving as spokeswoman for the “Bernie or Bust” movement.

She’s already written a song about her preferred presidential candidate, Bernie Sanders, and twice appeared on CNN, where she proclaimed her controversial stance to the nation.

During one of those cable news appearances, she said, "I won't vote for Hillary. I can't vote for her. … I think that we've been harmful in a lot of other countries and that Hillary Clinton has been a force for that harm in other countries."

In another, she refuted a Clinton supporter/strategist’s pitch to change her mind. Suffice it to say, in this heated election cycle, her words sparked some controversy.

Though she’s been in California spreading that message since late April, PhillyVoice caught up with Ndgo, a Northwest Philadelphia political activist, on the phone Monday to chat about the June 7 primaries in New Jersey and California, her "Bernie or Bust" organization’s mission and plans for the Democratic National Convention.

Saying her time canvassing for Sanders on the trail has been “inspiring,” she delved deeper into a mission that some would consider deeply quixotic as Clinton seemingly closes in on the nomination.

PV: What are the roots of 'Bernie or Bust'?

YN: 'Bernie or Bust' came about organically. There was an organization, Revolt Against Plutocracy, that started it toward the end of last year. It started as a pledge that they would only support Sanders, and if he doesn’t win, they would move toward a write-in campaign. Then, people realized that really wasn’t a viable approach, so it became write-in or vote Green. As it became clear that that wasn’t viable, it was a push to fully go Green.

Revolt Against Plutocracy started as two people and has become connected with 'Bernie or Bust.' Promoting this pledge, 100,000 people have signed so far. When they did it, they didn’t want to be spokespeople. They just wanted to let it happen. But when they saw my CNN appearance on April 22, they reached out and asked if I’d be lead spokesperson, which is what happened.

PV: What is the state of 'Bernie or Bust' since it’s starting to look like you’ll be forced to vote for a non-Democrat candidate?

YN: 'Bernie or Bust' is constantly transforming. It’s a developing organism, a transformative one, connected and influenced by the larger progressive movement. It’s about so much more than just Bernie. At this point, he functions as a beacon to draw together millions of people who really understand, have understood or are coming to understand the workings of our system as hypocrisy and as an oligarchy, and have problems with it continuing to function as such.

All of the other organizations and movements connected to ensure the system is transformed. People are coming together, and we’re very organized. Our strategy is a consistent push for Bernie as the presidential candidate, to make sure the Democratic Party really knows that we’re not just talk. [Otherwise] Democrats will not get the White House. [Widespread realization of our platform] is the goal and the hope.

We want to keep Donald Trump out of the White House as well as the Democratic Party taking ownership of the lack of balance. It’s an unreal and untrue momentum [being reported about Clinton’s seemingly insurmountable lead]. They have to acknowledge voter suppression and acknowledge that the true choice of people is Bernie Sanders. They need to make adjustments so that Bernie Sanders is the nominee.

We’re on the ground in California and New Jersey and hope to make these upcoming elections the ones that push Bernie Sanders to the point where he has enough of a majority of pledged delegates [to secure the nomination]. If that’s not what happens, they’ll need to publicly take ownership of a primary that wasn’t honorable, and how they had an unbalanced primary.

If the Democratic Party doesn’t do that, we’ll encourage voters to switch their registration to the Green Party and really work to push Bernie through that major change in registrations. With that offer to run atop their ticket, we know he’s said he’s not interested, but if we lift enough voices, we hope he’d reconsider. It’d actually make sure he’s on the ballot so we don’t have a terrible president in the White House, whether that’s Trump or Clinton.

PV: What kind of feedback have you gotten, both for and against?

YN: When I first did CNN, the emails and tweets I received, I have no ability to go through them all. I couldn’t even tell you how many I got from people thanking me for the message.

People from all over the world have thanked me. From Central America. From Rwanda. From places where people have experienced the impact of [former President Bill] Clinton’s [policies].

The negative feedback has been minimal. I had one, two uncles who said I shouldn’t have said what I said on CNN. I responded with, ‘Did you know this? Did you know that?’ and they said they didn’t. More and more people, as a result of watching those CNN appearances, have done the research on things the media are silent on and [are] saying there’s no way they can vote for her.

We don’t run into many people who are still speaking from the “Vote Blue No Matter Who” perspective. When we do, by the time we’re done engaging – they come in angry and judgmental, saying, 'You’re going to ruin the world,' – in the end, they say, ‘All right, I guess I understand your perspective that Hillary isn’t better.’

Even if they don’t agree, they can see where we’re justified. 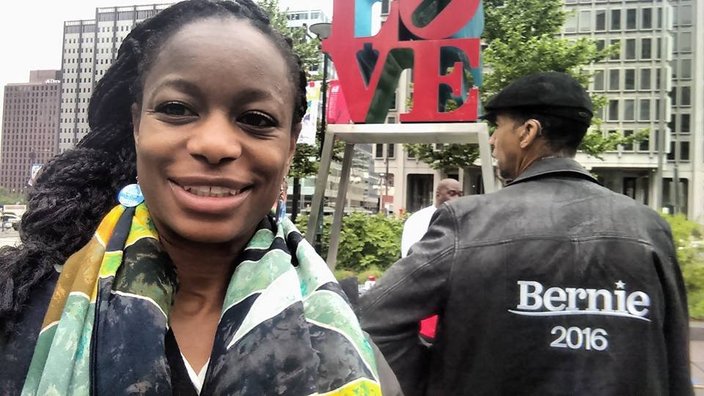 YahNe Ndgo says the Bernie or Bust movement has a slew of events scheduled for Philadelphia when the DNC comes to town in July.

PV: What do you think will happen if Clinton wins?

YN: If she secures the nomination, the Democrats lose the White House.

We will be working hard all year. I’ve put everything on hold, my business is falling under, because this is so important. We’re just not going to stand for the status quo that people are taught to expect and brainwashing tells them there’s no alternative.

This is what my whole life has become. We have to work just as hard to make sure Sanders, not a Clinton or a Trump, [is] in the White House.

PV: What will you think if Trump wins because of this pretty risky approach?

YN: I’ll be mad at all the people who pushed for Hillary Clinton despite the fact that we let them know this will happen.

"For us, the DNC is about celebrating a movement and building an organization, a community, with other people who have a unified vision of no more poverty, inequality, injustice, health care for everyone, education for everyone." – YahNé Ngdo

PV: What do you have planned, and expect to see, in Philly for the DNC?

YN: I believe that one of two things will happen: Either the Democratic leadership gets the message and makes adjustments that make Bernie Sanders the nominee. That’s not necessarily likely if he doesn’t secure a majority of pledged delegates, though. There will be celebrations in the streets if it does. So many people are so invested in this.

Or, that’s not going to happen and they’ll pull something similar to Nevada and blatantly disregard the Democratic process. In that case, we’ll spend a lot of energy managing the emotional response to that lunacy, and the hurt that will come from that.

Even though we know what happened to Bernie in Nevada wasn’t fair, we still felt heartbroken. I was up all night tweeting and talking to others involved in the movement. We were crying together and the process that leaves democracy being undermined.

No matter which way things go, we’ll organize further. It’s not just about Bernie Sanders or this moment. It’s a whole transformative movement [with other groups and celebrities like Rosario Dawson and Shailene Woodley involved].

Rosario has said, 'It’s not just a moment; it’s a movement.' That’s the real truth of this. We’re thinking well beyond July and well beyond November.

People are constantly coming up to me asking, ‘When are you going to run for office?’ I’m not. I have no interest. But that’s where people’s heads are at: Who can we have run for office?

We’ll be on a 10-day march from Washington, D.C. to the convention. There will be a 'Bernie or Bust' rally at the Municipal Services Building on July 26, marches from City Hall to the Wells Fargo Center. We’ll be at the Liberty Bell ringing our bells together to celebrate our voices and liberty.

For us, the DNC is about celebrating a movement and building an organization, a community, with other people who have a unified vision of no more poverty, inequality, injustice, health care for everyone, education for everyone.

We need to make sure this movement progresses and people are taken care of. The rallies are not just demonstrations saying, ‘Boo to the DNC.’ We’re saying yes to each other and to a culture of working to bring a better future to the global community.