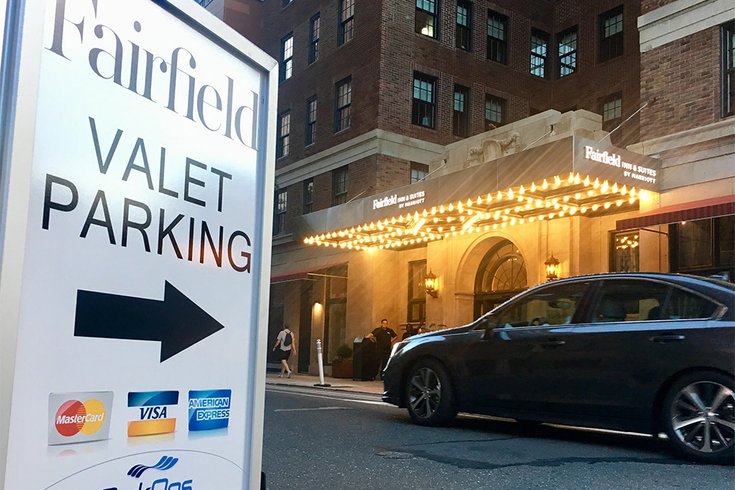 A lawsuit filed by a cyclist seeks an injunction against Marriott – owner of the Fairfield Inn and Suites at 261 S. 13th St. – and ParkOps, which manages the hotel's valet services. The court order would force the hotel to immediately stop allowing vehicles to block the bike lane on the east side of 13th Street.

A cyclist is suing a Center City Philadelphia hotel and the company that runs its valet parking operation, claiming vehicles arriving at the hotel consistently block the bike lane outside the building, endangering cyclists.

According to court documents filed on July 29, bike commuter Kyle Leach seeks an injunction against Marriott – owner of the Fairfield Inn and Suites at 261 S. 13th St. – and ParkOps, which manages the hotel's valet services. The court order would force the hotel to immediately stop allowing vehicles to block the bike lane on the east side of 13th Street.

The hotel has a permit to operate a valet stand on the west side of 13th Street, opposite its front entrance, but not on the east side of the street, where the valet is being operated in the clearly-marked bike lane.

The suit calls the "illegal valet parking zone," a "systematic and illegal block of the bike lane" that forces Leach, and other cyclists who use the route, to swerve into oncoming traffic to avoid being hit by parked and parking cars.

Stuart Leon, Leach's Center City attorney and an expert in bicycle crash law, said all three parties have been in talks with members of City Council and the Philadelphia Streets Department to get delineator posts installed between the bike lane and car lane.

So far, no posts.

ParkOps founder Daniel Bell told PhillyVoice he tried to put 42-inch white delineator posts up himself, along with a sign that read, "Bike lane only; use other side."

But after two days, he said, Philadelphia police ordered him to take them down. 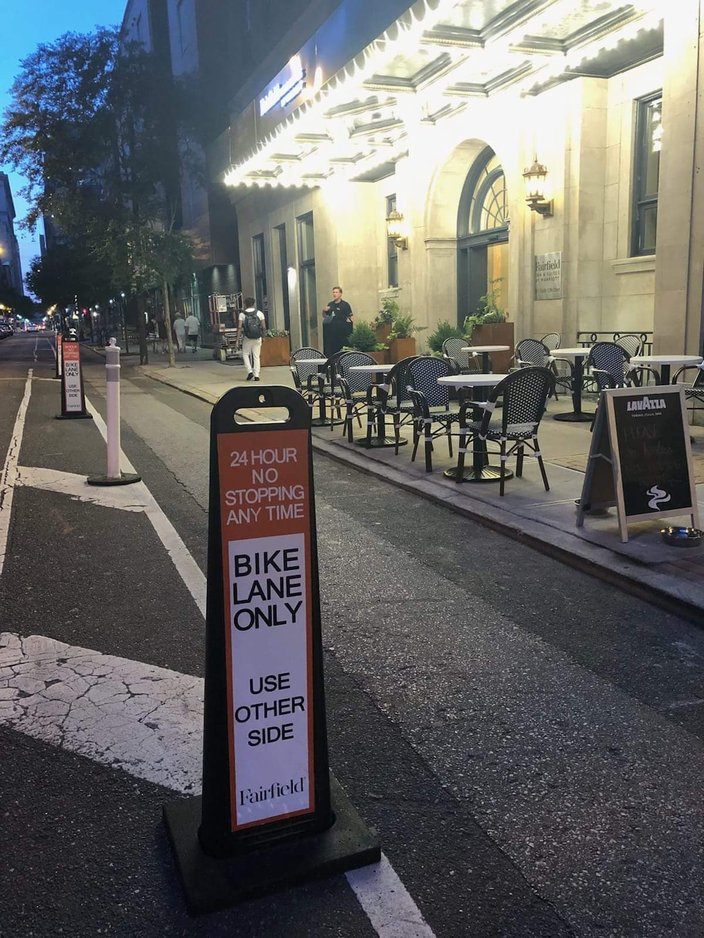 ParkOps founder Daniel Bell put up temporary delineator posts shown here in an attempt to discourage hotel guests from pulling in to the bike lane to use valet services.

According to Leon, city officials said they didn't have enough posts on-hand for such an installation.

"It’s unfortunate because it really was a solution," Bell said. "While we're a defendant here, we're also a proponent."

The traffic on 13th Street — namely from cabs, ride-sharing cars like Uber and Lyft, and delivery trucks — has significantly increased recently, making it a continual problem, Leon said.

"As you know, the 13th Street Bike lane is a primary artery and heavily traveled by bicycle commuters," Leon said in an email. "The motor vehicles occupying the bike lane cause a major danger/risk/disruption to bicycle commuters. We believe the only way to make the lane safe (is) to get it protected with delineator posts so we are working hard to get that done."

In the meantime, ParkOps employees know not to help any hotel guests who stop in the bike lane looking for valet parking; they are to immediately direct guests to the opposite side of the street, Bell said.

Regardless, 13th Street is labeled as a "No Parking" zone — not a "No Stopping" zone. So cars can still technically stop there for up to 20 minutes at a time.

"The real challenge is that … cars still stop in that bike lane and I don’t know how you avoid that," Bell said. "I’m sensitive to the issue. I like biking through the city. I think it needs to be safe. But it goes with the fact that there needs to be a better solution throughout the city on some of these bike routes."

"We’re 100 percent supportive of getting a solution on that," he added.

Both Bell and Leon want to see permanent posts go up — for good safety and for good business.

"At the end of the day, there’s a simple solution," Bell said.