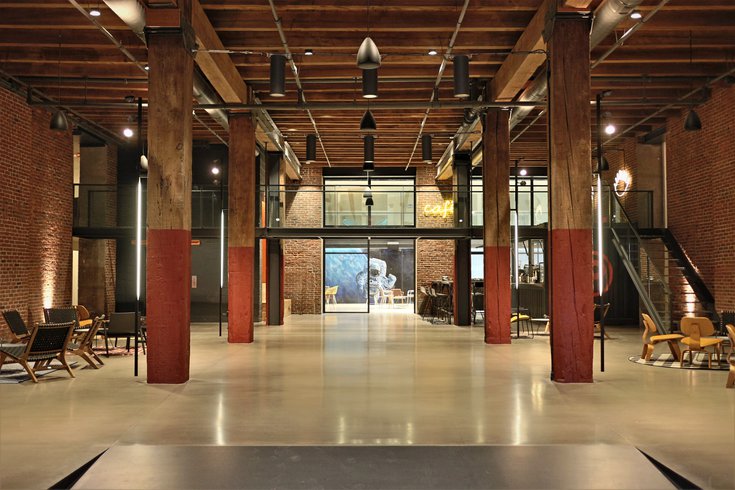 Throughout 2019, Milk Street Marketing was experiencing its most rapid period of growth since our inception four years prior. While our home in Grays Ferry had served us well for the better part of three years, it had become clear that it was time to find a larger space to house our expanding team.

Our priorities for the new office were centered on three primary factors. First, we needed something affordable, but also that would have room for Milk Street to grow. Most importantly, it needed to be a place that my team would enjoy spending their time. During our search, one of the properties we were interested in fit those criteria, and had a certain something that the others were lacking.

That building is called “Billy Penn Studios.” Located on North 5th Street in one of Philly’s hottest neighborhoods, Billy Penn Studios is anchoring a tidal wave of development in the up and coming Olde Kensington section of the city. On just a three block stretch surrounding the building are a range of new businesses including neighborhood bar Sutton’s, Tufas Boulder Lounge, Human Robot Brewing, Poe’s Sandwich Joint and a non profit outdoor venue called Sunflower Philly. 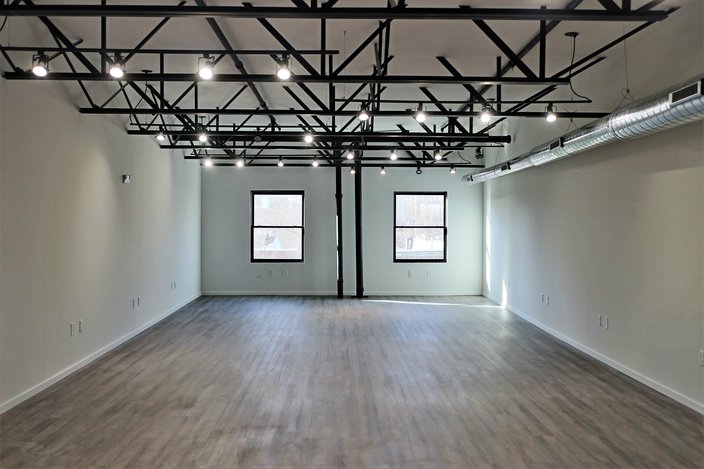 Billy Penn Studios/for PhillyVoice
When we first stepped foot inside Billy Penn Studios, we were blown away. Upon entering the grand lobby, our first impression was of the unique nature of the interior, reminiscent of something you would expect to see in the renowned Williamsburg section of Brooklyn, New York. The lobby houses the eclectic Perla Café which opens up into a three-story atrium called, “The Glass Annex on 5th”. Natural light from the glass ceiling casts a beautiful ambiance on the primary common area, ideal for events, tenants to have a meeting, or simply to eat lunch. Of course, this was right up our alley as experiential marketing specialists.

As we toured the rest of the building we learned that Billy Penn was much more than just the eye-catching aesthetic. The building is occupied by a diverse group of businesses ranging from burgeoning startups to large corporate firms, with uses ranging from a virtual reality gaming center to property development companies. What struck us specifically was Billy Penn Studios’ commitment to bringing in tenants that wanted more than just office space, but a true desire to become part of this community. From a business perspective, Milk Street has already benefited as such with several new opportunities with the building’s tenants.

That community focus is literally built into Billy Penn Studios, where there are plenty of places to gather together. In addition to the café downstairs, common areas include lounges, a game room, and other dedicated event spaces. Shared conference rooms give tenants the ability to host larger meetings that might not be practical in their own offices. 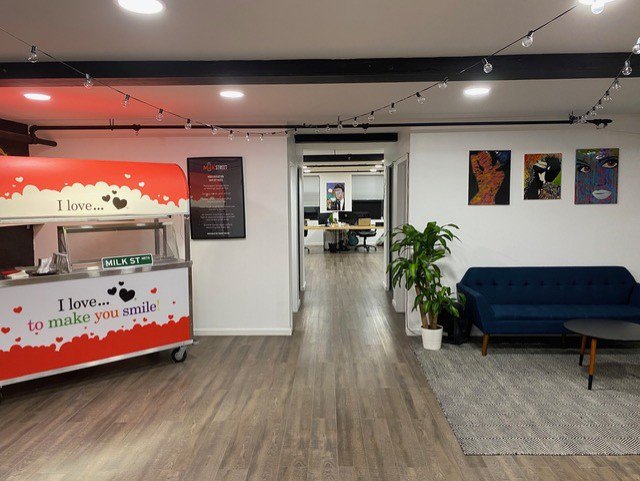 Billy Penn Studios/for PhillyVoice
When it comes to the individual units, we couldn’t be happier with ours. The modern industrial architecture gives the space character and helps to create a very cool vibe throughout the building. Furthermore, the management and owners worked closely with us when it came to implementing our custom office concept, tailored to our specific needs. We incorporated two strategically placed huddle rooms that allow our teams to have private work sessions or simply take a call. This has proven to be much more necessary now with all the Zoom and Google Meet teleconferences taking place. It also splits up the space so that we can isolate our workstations from our own internal communal area, complete with an ice cream cart and lounge. However, it remains modular and adaptable to be used as studio space for photo shoots, podcast productions or intimate networking events.

We also couldn’t help but find the historical nod to Philadelphia’s foremost founding father, William Penn to be another sign of us belonging to this community. Besides keeping the name of the former company that resided in the manufacturing facility, we share a common element in our affinity for another famous Philadelphian, Benjamin Franklin.

So why did Milk Street choose Billy Penn Studios? Short of being love at first sight, we knew immediately this is exactly where we need to be. It’s a space in which we can continue to grow, deepen relationships with clients, and serve as a refuge for our team to feel comfortable, be inspired, and call home.

Learn more about Milk Street Marketing at milkstreetmarketing.com and check out the place we call home at billypennstudios.com.