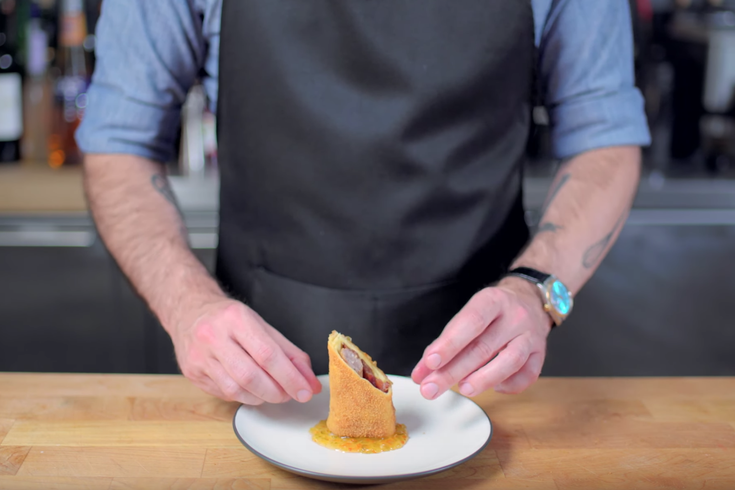 YouTuber Andrew Rea took "It's Always Sunny in Philadelphia" cuisine to a new level in the latest "Binging With Babish" episode.

By now, if you're using the internet and don't flinch at the term "YouTuber", you probably know about Binging With Babish. The YouTube channel from bald bearded man Andrew Rea examines food depicted in television shows and movies.

In a typical episode, Rea tries to make the food as its shown on the screen, before opting for a more gussied-up, gourmet version.

Rea tackled a local favorite in Tuesday's episode, the second part of his take on the food found in "It's Always Sunny in Philadelphia", which is often nightmarish and sometimes straight-up dangerous.

In a 2017 video, Rea tried a few classic recipes from the show, including the Grilled Charlie, the famous Milk Steak, and the gang's Riot Juice. That episode is also extremely worth your time.

Tuesday's episode, however, sees Rea's creativity hit another level with his take on the "Grilled Frank" from Season 10, which Charlie describes as "sausage, spam, bacon, wrapped in a jelly pancake and cooked with a stick of butter." Rea also tackles "Mac's Famous Mac and Cheese" from one of my personal favorite episodes in Season 11.

I've watched Rea's channel for quite some time now, but turning a Charlie Kelly abomination like the Grilled Frank into West Bengal staple pantheras is such an insane leap that it feels like high art.

The "Mac's Famous Mac and Cheese" also looks delightful, although I don't think Mac would ever consider trying cheese that isn't American.

My only suggestion for a theoretical third episode is to somehow rope the waiter from Guigino's, the fanciest Italian restaurant in Philadelphia, into a guest appearance. He and Rea can recreate the elusive snapper, or maybe some piping-hot spaghetti.