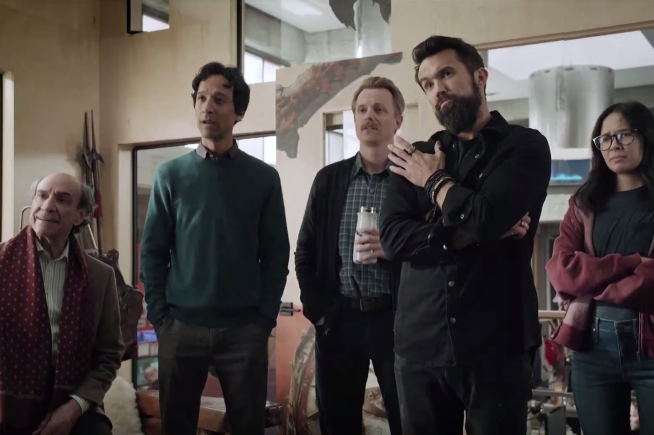 Rob McElhenney released the first clip to his new comedic series, "Mythic Quest: Raven's Banquet," which follows a team of developers at a video game company.

The "It's Always Sunny in Philadelphia" star introduced the clip at Ubisoft's E3 press conference on Tuesday. The show was co-created with his "It's Always Sunny" co-star Charlie Day, and it will debut on Apple's forthcoming streaming service, Apple TV+

McElhenney said viewers will be introduced to the game developers as they are "on the cusp of releasing their biggest expansion yet, 'Mythic Quest: Raven's Banquet.' The show follows the team of developers as they navigate the challenges of running their game while dealing with the difficulties of modern office life."

The Philadelphia native stars as the video game company's creative director, Ian Grimm, a boss with a bit of a god-like complex ... which we see pretty heavily in the clip. What starts off as a simple commercial for the game's newest expansion, "Raven's Banquet," quickly turns into an ego boost for Grimm – like when the voiceover compares him to George Lucas and Stephen Spielberg. There's then a nice shot of him in a desert with his shirt off ... McElhenney does like to appear on camera shirtless of late. His employees are a bit over it.

"Mythic Quest" is executive produced by McElhenney and Day through their production company RCG Productions, and real-life video-game development studio Ubisoft is among the shows other producers. A release date has not been announced.

Watch the introduction and clip below.