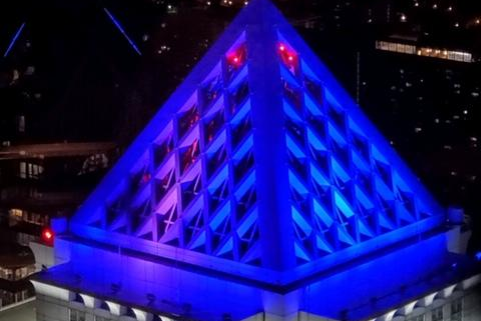 Though March is recognized as Colorectal Cancer Awareness month, this is a message worth repeating throughout the year. If you visited the city in the first week of March, you may have noticed the bright blue skyline.

For the past eight years, the Blue Lights Campaign has led the crusade in Philadelphia and beyond during March. Close to 30 landmark buildings were shining in blue, including skyscrapers, arenas, universities, the iconic Boat House Row, the Ben Franklin Bridge and even the Pennsylvania State Capitol. In 2017, the initiative was recognized with a national award from the American College of Gastroenterology.

After three years of training at Memorial Sloan Kettering, I have devoted my GI practice to prevention and early detection of colorectal cancer (CRC). It’s common and often deadly, but most of the time, it’s preventable! It’s disappointing to realize that despite advances in testing and treatment, one in three age-appropriate Americans are still not being screened.

Did you know that…

You often read an article which begins with statistics such as “This year more than 147,000 news cases will be diagnosed with…” but the average person thinks that they’re part of the other 328 million who won’t get it. When we compare the risk of CRC to the risks of other cancers, think of it this way: one in eight women will be diagnosed with breast cancer. One in three people over 50, and one in two people over 60, will develop colon polyps. Look around… that means half of the people over age 60 in your family, your office, gym, or book club likely have colon polyps.

A polyp is a small growth in the lining of the colon. Most polyps do not turn into cancer, but all cancer begins as a polyp.

If every person gets a colonoscopy and has those polyps removed, think how many lives could be saved. You see, other screening tests such as mammograms, detect early cancer. The goal of colonoscopy is to find and remove polyps before they turn to cancer or find cancer at an early stage when it’s easier to treat.

The biggest risk factor is age, but family history plays a major role in your risk. The American Cancer Society reports that up to 30 percent of CRC patients have a positive family history of CRC or just colon polyps!

Don’t think that only CRC is an issue. Polyps count too! If you have a relative with certain types of colon polyps, that increases your risk too. I often ask a patient about family history and they are quick to say, “No colon cancer in my family!” Then I ask if they have any brothers or sisters who have had a colonoscopy and the common reply is “Yes, but they only had POLYPS… all benign.”

This is important for a few reasons – it increases your risk for polyps/CRC and it changes our advice as to how often you should be screened and at what age you should begin.

As the Director of the Blue Lights Campaign, I want people to be wrapped in the “blue” message and feel the urgency to get screened.

Through the efforts of State Representative Maria Donatucci, we began lighting the PA State Capitol about five years ago and continue the annual tradition now with the help of State Senator Michele Brooks.

But I knew we could take the message even further, so I contacted Lieutenant Governor (LG) John Fetterman and LG Tim Griffin of Arkansas. This bipartisan team submitted my request to the National Lieutenant Governors Association, inviting every state to join the campaign and light their capitol buildings as well.

So, we close the month with great news! The resolution was accepted this past week on March 25, making this a national campaign. Starting in 2022, every state capitol is invited to shine in blue during March to remind people to get screened for the cancer that needlessly takes the lives of so many Americans. I am jubilant!

Next March, I invite you to join the campaign by adding a strand of blue lights to the front of your home or business or turning your porch light blue. Send us a photo of your blue lights to info@bluelightscampaign.com.

Now…promise me, Your Radio Doctor and YOURSELF that you’ll get screened for CRC!

Tune in to “Your Radio Doctor” on Talk Radio 1210 WPHT every Sunday morning at 10 a.m. Each week, Dr. Ritchie interviews guests, including physicians from all specialties, researchers, and other leaders in the medical community. She takes on topics like heart disease, colon cancer, neonatal care and many others.