From the boardroom to the pulpit: breaking the stained glass ceiling

Two women share how they overcame gender inequality behind the pulpit 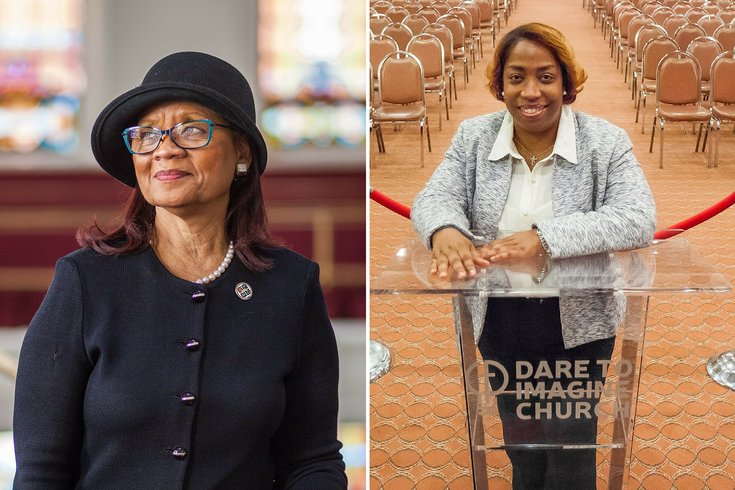 In the final installment of this two-part series, PhillyVoice explores the journey of two women in leadership positions at Wells Fargo and Independence Blue Cross, and at their churches as women in the pulpit. Discover the first part of their journey here.

For women who aspire to lead congregations, the stained glass ceiling has historically served as the very floor on which men stand firmly planted behind the pulpit.

The National Congregations Study released in December 2015 reported that while there’s more ethnic diversity among America’s solo and senior pastoral leaders, there has been relatively no change in the number of women in pastoral leadership in 18 years. When Mark Chaves, a Professor of Sociology, Religious Studies, and Divinity at Duke University, first directed and published the study it was the first of its kind.

“There really was a need to just have some basic information about the state of American congregations,” Chaves said. “So this is really kind of taking the pulse of congregations since 1998 on a variety of subjects including this one.”

Part one: From the boardroom to the pulpit: women of power

Reverend Dr. Lorina Marshall-Blake, President of Independence Blue Cross Foundation and associate minister at Vine Memorial Baptist Church, ran from her calling for nearly 20 years, in part because of this stained glass ceiling.

“I still don’t think there’s a total comfort level, especially in the Baptist church, with women in the pulpit,” said Rev. Marshall-Blake. “My own pastor had to do a complete turnaround.”

That turnaround would take time and patience. Although Marshall-Blake became a licensed minister, it was seven years before her pastor ordained her, during which time she watched others receive their ordination. She’s now one of his “greatest advocates and supporters” as a result of their shared journey to understanding and evolving when it comes to women in the pulpit. 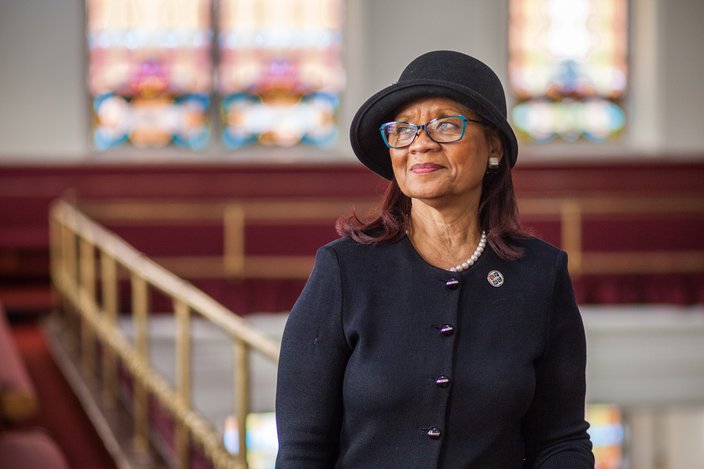 Reverend Doctor Lorina Marshall-Blake at the Vine Memorial Baptist Church where she is an Associate Minister.

“If you add it all up, the aggregate national needle has not moved, but it has moved some in some denominations,” said Chaves. “There’s variation, of course, across different religions and that’s a big part of the story, there are some groups where women are much more present in these kinds of positions.”

Michele Lawrence, Area President of Philadelphia Community Bank for Wells Fargo and a newly licensed minister under Pastor Kevin R. Johnson at Dare to Imagine (a Christ-centered, Bible-based, non-denominational church) had a much different experience with her pastor than Rev. Marshall-Blake. He was supportive and helped calm her anxieties.

“He put all of that to rest without ever talking about it [and] he did that through his mentoring, his reassurance of ‘know the word’ [and] study,” said Lawrence. “He made me feel that he would always have my back, and if there was ever an issue around gender he would address it with me.”

“Just like banking, preaching is a boy’s club,” she said, “So did I have concerns? Yes, because I wasn’t sure if I would be embraced.”

His words of support and assurance didn’t come back void in his actions. On the day of her trial sermon, her pastor’s congregation followed suit with the reported 68 percent of congregations in 2012 that allow women to preach at a main worship service when he invited her to use the church’s new pulpit.

“I was the first one to preach from it,” said Minister Lawrence. “He took a picture of it, sent it to me and said, ‘let’s use this as inspiration,’ two days before I was about to preach.”

Getting to that trial sermon was a process for Minister Lawrence. She had also run from her calling for 20 years. In addition to the intimidation of “being accountable for somebody’s salvation,” she said, there was also the reality of the stained glass ceiling.

“Just like banking, preaching is a boy’s club,” she said, “So did I have concerns? Yes, because I wasn’t sure if I would be embraced.”

Rev. Marshall-Blake’s trial sermon, on the other hand, revealed a reality discussed far less than predominately male pastoral leadership: the lack of support and encouragement among women in ministry. After delivering her sermon, a woman of the cloth approached her and asked, “And just who do you think you are?”

Rev. Marshall-Blake decided to take the high road and instead simply thanked the woman and gave her a hug. According to her, the preacher has since become one of her greatest advocates.

“Lots of times there are some women in ministry that don’t support each other,” said Rev. Marshall-Blake, “so I try to celebrate, and even when they don’t celebrate me I say, ‘OK, but I’m going to celebrate you.'”

Coincidentally, both Rev. Marshall-Blake and Minister Lawrence made the decision to finally embrace their calling to the pulpit at women’s retreats. It was at those respective retreats that they both had a “Come to Christ” moment and broke down in the face of their fears, insecurities, and concerns.

Michele Lawrence poses in the room that is used as a sanctuary for the Dare to Imagine Church where Lawrence serves as Minister under Pastor Kevin R. Johnson.

“You don’t know how broken you are until you start talking to God about your brokenness,” said Minister Lawrence.

But these insecurities due to issues of gender equality aren't exclusive to the church.

“There’s some evidence that progress, or increasing progress, has kind of stalled on gender equality in other realms as well, not just religion,” said Chaves, “so I think it’s kind of consistent with that larger story of women in professions: there was a big increase in women entering professions in the 1970’s until the early 2000s, then it kind of leveled off.”

The NLC study also found that the acceptance, in principle, of female pastoral leaders is much more common than the actual presence of female pastoral leaders. This can be largely attributed to the fact that women with Masters of Divinity degrees have been found to be less likely to pursue pastoral ministry than men. Regardless of these statistics, there are women who do choose to pursue pastoral leadership, and a segment of them — much like Rev. Marshall Blake and Minister Lawrence — have to consistently balance being a woman from the boardroom to the pulpit.

In light of this challenge, a message that Minister Lawrence’s pastor shared with her resonated and helped her to stay focus: “It’s not about what people think; you will not please man and if you spend your time trying to, then you’ve already lost.”

For both women, it’s this reality that is most important.

"I want women to know you can be corporate and be a minister too. It’s not some days I’m saved and some days I’m not," Rev. Marshall-Blake said. "I’m consistent. I walk in my door [at IBX] saying this is the day the Lord hath made. I put God first.
I’m always clear, and folks are clear, on who I am -- and not only who I am, but whose I am. Even the ones that have issues [with my faith], when it gets crazy, they’re at my door.

"I think the key is being consistently consistent; [I] don’t change."