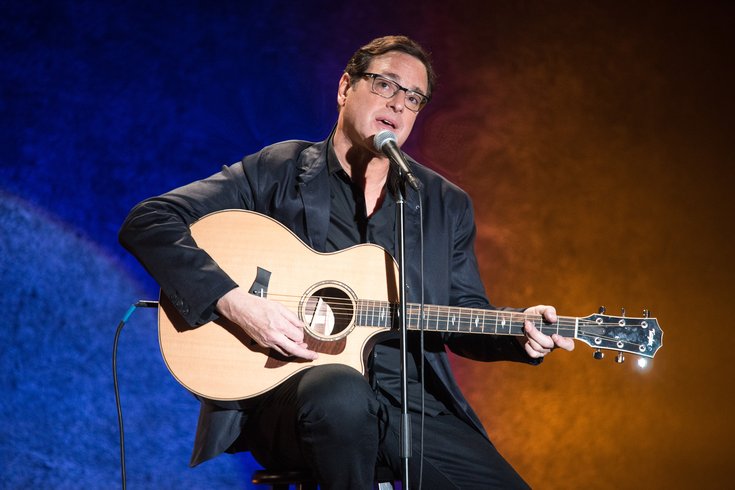 Bob Saget, a Temple University alum, is seen above performing during his Amazon Prime comedy special 'Zero to Sixty.' Saget will be onstage at the Keswick Theatre on Friday, Oct. 25.

Even though Bob Saget hasn't lived in Philadelphia since he graduated from Temple University in 1978, the actor-comic returns often. Saget visits family, his alma mater (Saget returned in 2017 to Temple to honor Philly broadcast pioneer Lew Klein) and for his comedy shows.

"There is no place like Philadelphia," Saget said during a recent phone call from Boston. "I love performing at the Keswick Theater. I had a date there earlier in the year, and I had to reschedule the show (from April) because I was sick. I couldn't leave Los Angeles. I had a stomach thing. If I performed it would have been a really gross show."

Saget, 63, will return to the Keswick on Friday, Oct. 25, to deliver stand-up and more. "The first thing I do when I go back home is eat a cheesesteak," Saget said.

What's Saget's favorite place for the high-calorie Philly specialty? "I can't say, but it's Jim's," Saget cracked. "I'm all about food in Philly. That was always so for me since before I embarked on this career, I worked in food."

The son of a supermarket executive worked at a Pantry Pride in Jenkintown and at Wyncote's Cedar Brook Plaza.

"I worked in the seafood department," Saget said. "I remember having to do the deed on a 60-pound carp for Passover."

Restaurant impresario Stephen Starr had a hand in Saget's success, and it had nothing to do with food. "I performed at his club, which was called Stars at Third and Bainbridge," Saget said. "I won a comedy contest WMMR put on at some place called Grandma Minnie's when I was 17. I appreciate what Stephen Starr did for me. I remember opening up for Frank Stallone at Stars. Steven is a good guy. I love his restaurants."

What does Saget order at Starr's Buddakan? "Dumplings and soup," Saget said. "What else would a man of my age eat?"

Saget has been eating on-the-run considering his schedule. His comedy special "Bob Saget: Zero to Sixty," recently was released on Amazon Prime. Saget is directing a documentary on legendary actor/writer/musician/painter Martin Mull. Saget will host the new CMT show "Nashville Squares" in November, and in early 2020, Bob will star in the new ABC series, "Videos After Dark."

The fifth and final season of "Fuller House," is being shot with Saget and his longtime pals. "We're all good friends, and we have fun together," Saget said. "I enjoyed being on that show. I'm constantly working but it's been that way since I started "Full House."

When Saget first played dust-busting dad Danny Tanner on "Full House" a generation ago, he also was hosting "America's Funniest Videos." Saget worked at least 90 hours each week; the schedule was unrelenting.

"That's just what you had to do, and I enjoyed all of that work so much," Saget said. "I was also young back then. It's been so much fun doing "Fuller House." Who would have guessed that the show would return? All I know is that when I reunited with John (Stamos) and Dave (Coulier), it was really moving. It's also amazing the girls from the show turned out so well They're all like my own daughters. I loved the "Full House" and "Fuller House" experience."

Perhaps there will be a "Fullest House" someday. "If there is a "Fuller House," it'll be me in an urn by the window," Saget cracked. "I didn't do bad for a Jewish guy from Philly."