#Bodycheck yourself, wreck yourself: Why Instagram wants you to hate yourself 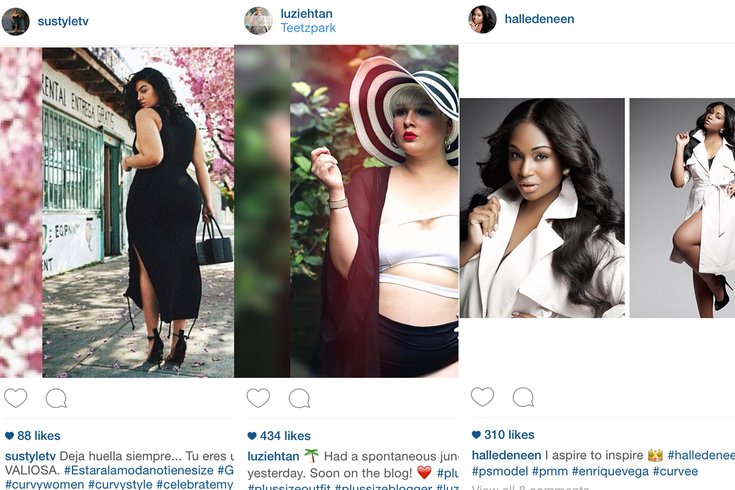 One outcome of the #curvy ban is that body positive Instagrammers have cultivated alternative hashtags, like #curvee, where they continue to post full figure flattering bikini selfies and pin-up style portraits featuring lacy lingerie.

Here’s what you get when you Instagram #thin (2 million+ posts):

Here’s what you get when you Instagram #skinny (7 million+ posts):

“My stepmother forced me to [have] lunch so I ate 1tbsp of smashed potato (60) and salad (50). I also had this sugar free candy (111) and zero coke. I’m feeling really guilty for eating that much and I have this stupid headache for hours.”

dinner: half a cup of soup

total: 109 calories *exercise to burn all the calories*”

In her recent piece “The panic over pro-anorexia websites and social media isn’t healthy,” Slate’s Amanda Hess writes, “The scariest pro-[anorexia] message may be the one we can’t hear: The Snapchat thinspo that dissolves before parents and press find it, or the WhatsApp group that organizes fasts where Google searchers can’t follow.” Hess goes on to argue that the Internet shouldn’t censor “all the diverse and complicated ways people with eating disorders express themselves online.” I don’t necessarily disagree. But what happens when the Internet censors all the diverse and complicated (and sometimes refreshingly straightforward) ways people with body-positive aspirations seek to express themselves online? When Instagram obliterates #curvy, yet exempts #skinny and #thin, it becomes undeniably clear that self-loathing is the heart of Instagram’s skewed design.

One outcome of the #curvy ban is that body-positive Instagrammers have cultivated alternative hashtags, like #curvee, where they continue to post full-figure-flattering bikini selfies and pinup-style portraits featuring lacy lingerie. Instagram #curvee, and you’ll see a lot of skin, though none of it could remotely be considered lewd. Instagram’s barely bouncing boobs and furious masturbators are nowhere to be found. They have no interest in advertising under #curvee. They likely had similarly little desire to usurp #curvy. Sadly, though the media touts the emergence of #curvee as a sweeping counter movement, at just more than 5,000 posts, #curvee’s search results yield relatively slim pickings.

Another, more prominent consequence of Instagram’s preference for body-negative content is that hashtags once exclusive to underground eating-disorder communities are now spilling into the mainstream.

For instance, #skinny selfies are frequently co-indexed with the hashtag #bodycheck. Conjure “body check” and you might picture a hockey player’s mangled face smushed against a pane of plexiglass. Or maybe you recall what it’s like to inspect every square inch of your skin for ticks after a camping trip. Instagram #bodycheck however, and you descend to a whole new level of relentless self-scrutiny.

Slit wrists, smeared mascara, protruding ribs, collarbone comparisons, skin pinched until it bruises. Men, women and teenagers of all shapes and sizes obsessively uploading body selfies as a means to document (often imperceptible) changes in their appearance. The photos are incredibly intimate; you can even make out the intricacies of so many unique fingerprints smudging streaky bathroom mirrors. The effect is sort of like a tick after all; it burrows under your skin and leaves you feeling unwell.

You might think you’ve never heard of this type of “body check,” but recent “fad” body checks or “challenges” are dominating international news. Viral body checks like the Collarbone Challenge and the Belly Button Challenge might seem trivial or sensationalistic, until you consider their roots.

Often, my advocacy for eating-disorder awareness gets confused with “promoting obesity,” as if eating disorders and obesity were mutually exclusive. Obese and overweight people not only can have eating disorders, they often do have eating disorders. If anything, our rising obesity rates reaffirm our culture’s increase in disordered eating, which almost always stems from shame. Whether or not you want to blame Instagram, there’s something to be said for the fact that cultivating an “acceptable,” permissible online presence means promoting social media’s default penchant for body hatred.

And it’s easy to see why. After all, misery loves company.