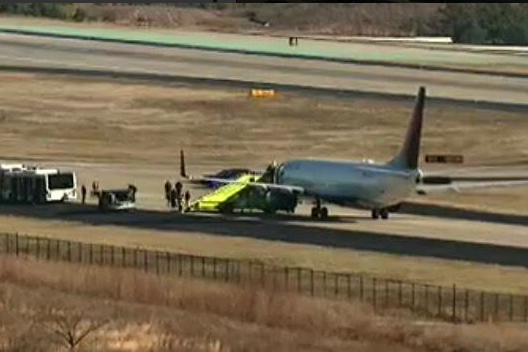 NORAD scrambled to escort two flights to their landing in Atlanta

Atlanta - Two U.S. airliners landed safely at Atlanta's Hartsfield-Jackson International Airport on Saturday after bomb threats were made against them, an airport spokesman said.

Atlanta's WSB-TV reported that threats originating on Twitter were deemed to be credible against Delta Flight 1156, coming from Portland, Oregon, and Southwest Airlines Flight 2492, coming from Milwaukee.

Passengers left the planes safely and bomb-sniffing dogs were sent to search them, McCranie said.

According to FBI spokesman Special Agent Stephen Emmett, no bomb was found aboard the Delta flight, but the Southwest flight was still undergoing a search by explosives unit.

A NORAD spokesman said the aircraft were each accompanied by a pair of North American Aerospace Defense Command fighter planes as they landed in Atlanta.