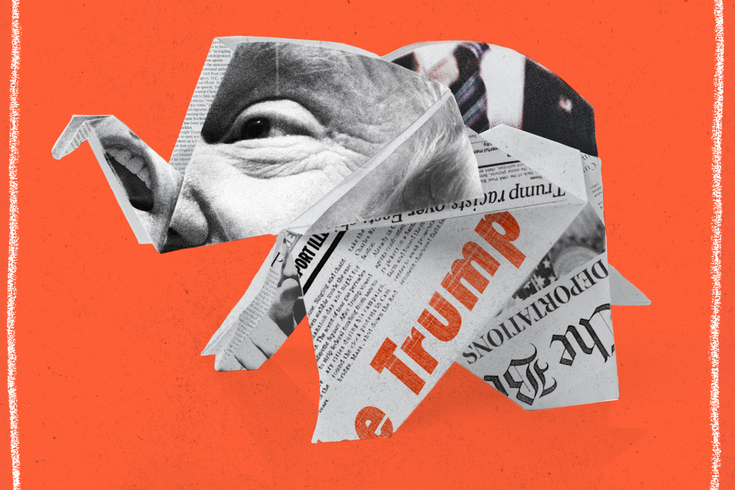 In his fun and fascinating new 48-page e-book, British journalist/author Jon Ronson connects the dots between Donald Trump and one of his most out-there supporters: conspiracy mogul Alex Jones.

As with Trump,  it’s easy to think of Jones as a sort of nutball force of nature, an inevitable byproduct of the modern age.

So much social interaction is built around populist policing, article skimming and arguing without fear of consequence or hope for resolution — so why wouldn’t one of the loudest, craziest voices rise to the top?

Freed from the shackles of traditional journalism (chiefly: fact-checking, accountability and decorum) but burdened by the need to top himself on daily YouTube videos (so many chilling, fruitless predictions), Jones endorses every idea he’s ever heard: juice boxes make you gay, atheists worship the devil, everything that’s ever happened is a “false flag operation,” etc.

Unlike his spiritual predecessor, late-night radio host Art Bell, who talked about ghosts and alien abductions with a wink and shrug, Jones claims to have concrete answers about the secret organizations that run the world. As such, he’s become a kind of cult figure for an audience of disenfranchised American dreamers. His site, infowars.com, is visited by 7.5 million people a month.

But back in the late ’90s, he was just a 20-something libertarian dude with a small-time radio show in Austin, Texas. He was on a mission to rebuild David Koresh’s church in Waco for some reason when British journalist and author Jon Ronson first found him.

“I am basically Alex Jones' Simon Cowell,” Ronson sighs incredulously in his new Kindle Single, “The Elephant in the Room: A Journey into the Trump Campaign and the ‘Alt-Right.’”

It’s true; it was Ronson who picked Jones out of the conspiracy-theory lineup and gave him an international platform via his 2001 book, “Them: Adventures with Extremists.” The exciting last chapter features Ronson and Jones sneaking into the infamous New World Order garden party known as Bohemian Grove to mingle with elites and witness a weird secret ritual.

At the end of the evening, they watched a robed figure toss an effigy of “Dull Care” into a fire at the foot of a giant stone owl. There was some light chanting. They stood bewildered as all the old CEOs and political bigwigs at the party urinated in the woods on their way out, as per some fratty tradition. The whole thing was bizarre and ridiculous and it really happened. (It’s been happening, annually, since 1872, apparently.)

Ronson came away thinking it was pretty silly.

Jones came away with all his conspiracy fears confirmed. He told his audience that he might have just witnessed a human sacrifice.

For both, Bohemian Grove was a turning point, a moment that led them to where they are now. You could say Ronson and Jones are each other’s Simon Cowells.

Ronson’s adventures also include chatting with well-meaning Trump supporters, watching a flag-burner light herself on fire by mistake and wandering the Republican National Convention horrified like a Muppet in a morgue.

Bolstered by his active imagination and some shaky Bohemian Grove footage, Jones became the conspiracy king of the world.

Ronson, meanwhile, became a successful author and the most humane purveyor of the give-them-enough-rope journalism, often interviewing people with outlandish and unreasonable beliefs.

He won’t say you’re crazy, but he’ll let you talk for a while, and if you paint yourself into a corner or a padded cell, he’s OK with that. He’s just as likely to make you think more compassionately about psychopaths or the victims of web-based shame campaigns.

Much of “The Elephant in the Room” involves Ronson, in a fairly comical if undignified manner, trying to pin Jones down for an interview. He’s able to rekindle their decades-old acquaintanceship by yelling “Bohemian Grove” at a rally. Jones looks down from the stage, recognizes his ol’ journalist pal and away we go. Ronson’s adventures also include chatting with well-meaning Trump supporters, watching a flag-burner light herself on fire by mistake and wandering the Republican National Convention horrified like a Muppet in a morgue. 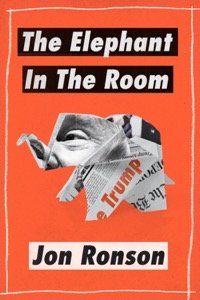 Jon Ronson/for PhillyVoice
It’s a wild, fairly quick read, built around the scary notion that Jones has Trump’s ear. The GOP presidential nominee’s “top adviser” Roger Stone seems to spend an awful lot of time hanging out with Jones, chatting about how many people the Clintons have had killed and such. Small talk.

The direct line between Trump and Jones is pretty vague, of course. The former appears to have quoted the latter in speeches. The latter claims to be in contact with the former. But it’s a fair bet both men are just gently using each other, all fingers and toes crossed, ready to distance themselves when it meets their needs.

Ronson and Jones enjoy a more interesting dynamic. There’s disagreement without hate, suspicion coupled with respect. That’s really what makes this little book tick: the notion that the skeptic and the doomsayer mostly enjoy each other’s company.