Prior to AVM resection at Penn Medicine, severe headaches plagued the Harrisburg woman 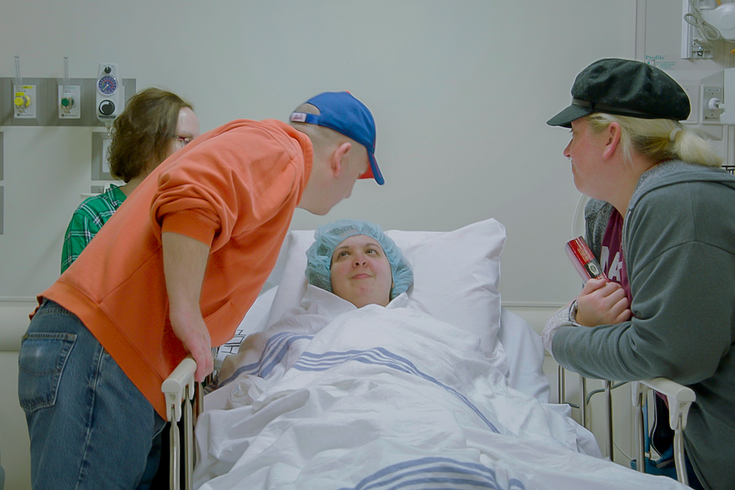 Brandie Trostle meets with her family prior to undergoing successful brain surgery to remove an AVM at Penn Medicine.

The headaches first arrived sometime in 2016, Brandie Trostle said. For about two years, they never left.

These weren't just minor headaches, either. They were so intense that she felt as if a concrete block had been attached to the left side of her head. And that weight only felt heavier as each day passed, Trostle said.

"It was a chronic headache that would not go away at all," she described. "I started to get really bad dizziness with it and nausea. Sometimes it would lead me to actually throw up."

The headaches grew so painful that Trostle, 28, of Lower Paxton, Dauphin County, began canceling on her friends. She ceased driving. Finally, one day, she passed out.

A doctor in Harrisburg suspected Trostle had vertigo, she said, but he ordered an MRI to confirm that it wasn't anything worse. About a week later, he called Trostle with some startling news: She had a brain arteriovenous malformation, a rare condition that affects less than 1% of the U.S. population.

A brain AVM is a tangle of abnormal blood vessels that connect arteries and veins. Typically, arteries disperse oxygen-rich blood into a system of capillaries responsible for delivering oxygen to the nearby brain tissue. Oxygen-depleted blood then travels through additional capillaries before exiting the brain through veins.

AVMs lack those capillaries, forcing high volumes of blood to quickly flow through limited space. Eventually, the vessels can break and bleed into the brain.

AVMs can occur anywhere in the body, but they most often occur in the spine or brain – and that's also where they can cause the most damage, according to Dr. Omar Choudhri, Penn Medicine co-director of cerebrovascular and endovascular neurosurgery. Left untreated, AVMs can result in paralysis, seizures and, sometimes, death.

Scientists have yet to determine what specifically causes AVMs. But they believe the tangles blood vessels are congenital, forming sometime during the fetal period. People can live unknowingly with an AVM for decades, as it can take as many as 40 years before they become symptomatic.

"Half of the people may not have any symptoms," Choudhri said. "They may just be diagnosed because they were getting the brain scan for other reasons. They were involved in a motor vehicle accident or they bumped their head or something. And they just found an AVM."

In many ways, Trostle's case was emblematic of the way AVMs present and are diagnosed, Choudhri said. She was a high-functioning adult who began having bad headaches, imbalances and falls. Doctors initially struggled to diagnose her condition until an MRI revealed a 2-centimeter AVM in her left cerebellum.

Trostle connected with Choudhri when seeking a second opinion. He recommended a complex brain surgery requiring him to temporarily remove part of her skull to resect the AVM. But Choudhri believed it would eliminate Choudhri's symptoms.

Trostle's reaction? A mixture of fear and relief.

"Honestly, I was going through two years of misery," Trostle said. "Part of me was kind of relieved. ... It was comforting to finally have a diagnosis and feel like we were finally getting to the bottom of it." 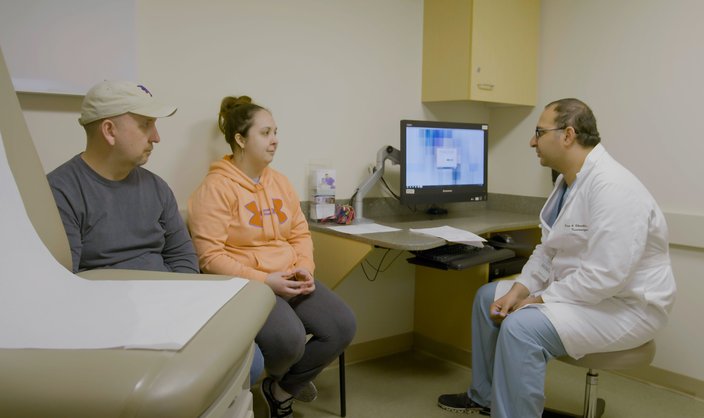 Not all AVMs require surgery.

"AVM is one of those interesting conditions where it's not one-size-fits-all," Choudhri said.

Stereotactic radiation can be used on AVMs smaller than 3 centimeters. The radiation beam causes scarring, prompting blood vessels to clot and gradually clear the AVM.

Stereotactic radiation has an 85-90% success rate, Choudhri said. But it takes one to three years to run its course and symptoms can persist throughout. Given the impact the AVM was having on Trostle's work performance and lifestyle, Choudhri didn't see radiation as a viable option.

Other AVMs can be treated by endovascular embolization, a procedure in which doctors insert a catheter into an artery and use X-ray imaging to thread it through blood vessels into the brain. An embolizing agent is then injected to block the artery, reducing flow into the AVM.

But embolization has a cure rate of less than 10%, Choudhri said. So, it's typically only used as an adjunct procedure.

That left open brain surgery as the best treatment for Trostle.

Surgical resections require neurosurgeons to seal off the AVM using clips, preventing blood from entering the AVM. The neurosurgeon then carefully removes the AVM while preserving blood outflow until the end of the procedure.

Choudhri likened the procedure's complexity to disabling a bomb. It requires the neurosurgeon to understand exactly how the AVM is constructed and consider blood flow. 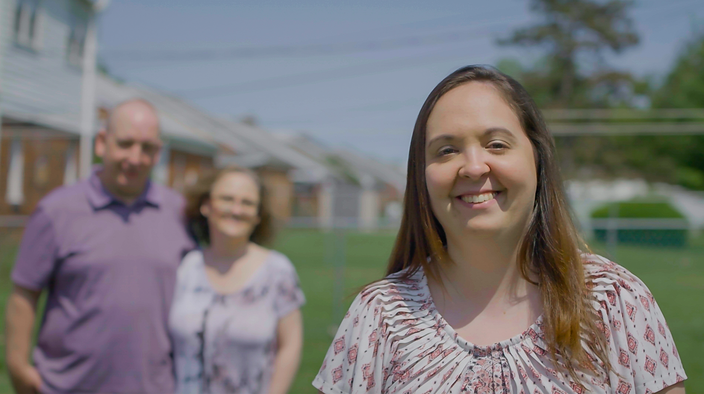 Brandie Trostle, shown her with her parents in the background, says she is grateful that she can now live the stereotypical life of a 28-year-old woman. Prior to undergoing brain surgery to resect an AVM, Trostle battled severe headaches that prevented her from driving and going out with friends.

Trostle underwent brain surgery on April 11. Within two days, she was out of the hospital. More importantly, she had been freed of headaches.

"For two years, I had a migraine and it was gone," Trostle said. "I haven't had a headache since the surgery. It's an incredible feeling."

Trostle's recovery included physical therapy to alleviate neck pain from the surgery. In time, she regained the life that her headaches had stolen. She goes out with friends. And her work as a media buyer is no longer hampered by her health.

"The normal, 28-year-old, stereotypical life – I actually get to have that," Trostle said. "I'm so grateful for that."

Now, Trostle urges anyone feeling unusual head pain to seek medical attention. She mistakenly soldiered on until her symptoms heavily impacted her life.

"I had the athlete's mentality," Trostle said. "I always have. But with stuff like this, you can't have that mentality."

Trostle's symptoms may have begun as a youth athlete. Trostle threw javelin at Mount St. Mary's University in Maryland, and played various sports growing up.

When she pushed her body particularly hard, Trostle said her head sometimes felt as if it was going to explode. She always assumed she was out of shape and needed to work harder. Now, she suspects it was an early symptom of the AVM.

"I think about all the times I hit my head and how scary that is," Trostle said. "For me, anytime somebody has a headache that won't go away, I say, 'Get that checked.' You don't know how serious that could be."