The Humane Society is removing 4,000 dogs from an Envigo site accused of euthanizing animals without anesthesia, among other violations 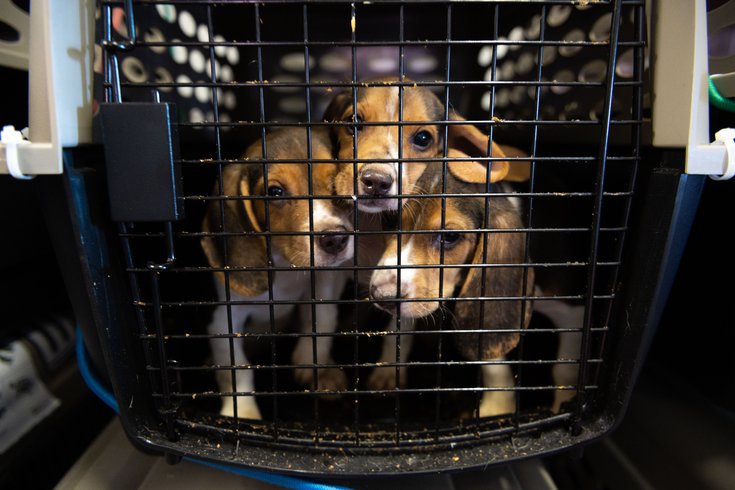 Kevin Wolf/AP Images for the HSUS

More than 4,000 beagles are being rescued from a massive breeding facility in Cumberland, Virginia after the Department of Justice sued it for alleged Animal Welfare Act violations. The Brandywine Valley SPCA in West Chester is set to receive 20 of those dogs.

Brandywine Valley SPCA will receive 20 beagles next month as part of a much larger rescue effort by the Humane Society of the United States.

The Humane Society is coordinating the rescue and removal of more than 4,000 beagles from a massive breeding facility in Cumberland, Virginia. The U.S. Department of Justice sued the Envigo facility for alleged violations of the Animal Welfare Act.

Envigo was raising beagles to be sold to laboratories for animal experimentation, the lawsuit states. Multiple federal inspections of the facility found dozens of violations, including dogs that had been euthanized without receiving anesthesia, inadequate veterinary care, insufficient food and unsanitary conditions.

The Humane Society has removed more than 400 beagles from the facility, sending most of them to its partner shelters and rescues for care and eventual adoption. Brandywine Valley SPCA, based in West Chester, Chester County, is the first in the Philadelphia region to accept some of the dogs.

"We are going to take those beagles in, assess them both for medical (issues) and for socialization, make sure they get everything they need, and then they are going up for adoption across our campuses to find families," Linda Torelli, Brandywine SPCA's chief marketing officer told KYW. "We don't have a good sense yet of the dogs coming out of that facility, so we are prepared to provide (any) needs and fostering that those dogs may need to they could become family pets."

The dogs are expected to arrive at the facility within the next few weeks, Torelli told PhillyVoice.

Envigo was heavily criticized by the animal rights organization PETA, which conducted an undercover investigation of the facility in 2021. Later, federal lawmakers urged the Department of Justice to shut down the facility and rescue the dogs, citing violations to the Animal Welfare Act.

Federal inspectors found that some dogs were killed instead of receiving veterinary care for easily treatable conditions, 6ABC reported. Nursing mother beagles allegedly were denied food, or given food with maggots or fecal matter. Twenty-five dogs died from excessive cold exposure, while others were attacked by other dogs because of overcrowding.

BREAKING: The Humane Society of the United States embarks on a historic operation involving the removal of approximately 4,000 beagles from the Envigo facility in Cumberland, Virginia which bred dogs to be sold to laboratories for animal experimentation.https://t.co/OkV0czYVJ0 pic.twitter.com/RDJh0yAE5y

More than 300 beagle puppies died of "unknown causes" between January and June of 2021, the Department of Justice alleges in its lawsuit, adding that Envigo's staff veterinarian was not required to be notified if one of the dogs in the facility was found dead.

The Department of Justice seized 145 dogs from the facility in May before tapping the Humane Society to handle the rescue the remaining dogs, according to the lawsuit.

In June, Inotiv, Inc., Envigo's parent company, said it would shutter two of its Envigo facilities in Virginia, though the company did not reference the litigation against the Cumberland-based facility.

"These dogs have lived their lives in a massive breeding facility riddled with Animal Welfare Act violations," said Miguel Abi-hassan, the Humane Society's chief animal rescue, care and sanctuary officer. "We are so grateful for the opportunity to work with our shelter and rescue partners to give these beagles a new life."

The Humane Society is documenting the transport and rescue of the dogs. On Friday, the animal rights organization hosted a YouTube livestream of the first group of dogs to arrive at its facilities.

Animal lovers also keep track of the Brandywine SPCA's ongoing effort to retrieve its 20 dogs by following the shelter on social media.