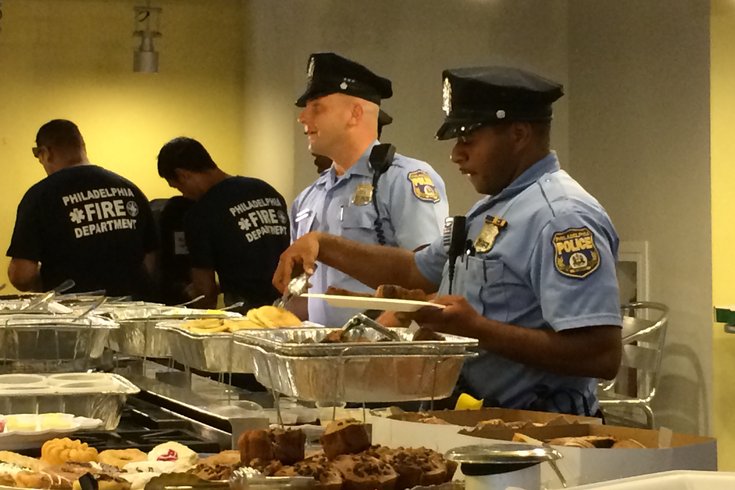 Emergency responders grabbed a free breakfast at Reading Terminal Market during an event held in their honor for their service after the Amtrak crash.

A breakfast was held at Reading Terminal Market Thursday to honor first responders and their efforts to save lives in the immediate aftermath of the Amtrak passenger train crash that killed eight and injured hundreds in May.

“When the chips are down and things have to happen, we come together,” said Police Commissioner Charles Ramsey at the breakfast. “That is exactly what happened on the night of that terrible tragedy.”

About 40 first responders were present at the market during the press conference where the fire and police commissioners, as well as a representative from the mayor’s office, praised the rescue effort.

The food was donated by the markets’ merchants. They expected about 150 emergency personnel to filter in Thursday morning to grab food at a spot set up near the central seating area.

Alan Greenberger, the city’s deputy mayor for economic development, said the Amtrak crash was a “reminder to us that these kinds of things… can happen anywhere at any time in any city in the world."

“How we respond is as important as everything else that we can do,” Greenberger said.

A mass casualty training exercise had been held in Philadelphia just prior to the Amtrak crash, said Chris Gowen, an assistant general manager at Reading Terminal Market and a former firefighter. He said the training kicked in and officials responded superbly during the crash.

“We truly appreciate everything you guys do.”

The Amtrak crash occurred on a Tuesday evening in May. Investigators say the train was traveling in excess of 100 mph, which was well over the speed limit, when it reached a sharp curve and derailed. The crash folded the front cabin and sent a burst of light into the air as the train crashed through electrical wiring. It was so bright nearby residents thought they saw a lightning strike.

Fire Commissioner Derrick Sawyer, said he was happy to have an opportunity to hold an event in recognition of the effort his people made that day to save lives.

“I have already thanked my members personally, but this gives me the opportunity to thank them publicly,” Sawyer said.