Congressman opts not to pursue re-election in Montgomery County district

Under the new congressional districts, released Monday by the Pennsylvania Supreme Court, Boyle could have run in either the Second or Fourth districts.

Boyle, a two-term Democrat, opted to run in the Second district, which is entirely in Philadelphia, his hometown. The district encompasses Northeast Philadelphia, where Boyle lives, as well as the river wards and portions of North Philadelphia that lie east of Broad Street.

"This was a tough decision," Boyle said in a statement. "I know my friends, supporters and constitutents in Montgomery County – who reached out to me this week and asked me to run in the county – will be disappointed with my decision. But regardless of district number, I won't stop working for the causes we care about."

Congressional candidates do not have to live in the district they wish to represent, but it reduces their chance of winning.

In the new map, much of Boyle's current district was redrawn into the Fourth Congressional District, which includes virtually all of Montgomery County and a sliver of Berks County.

There is no clear-cut favorite in that district. 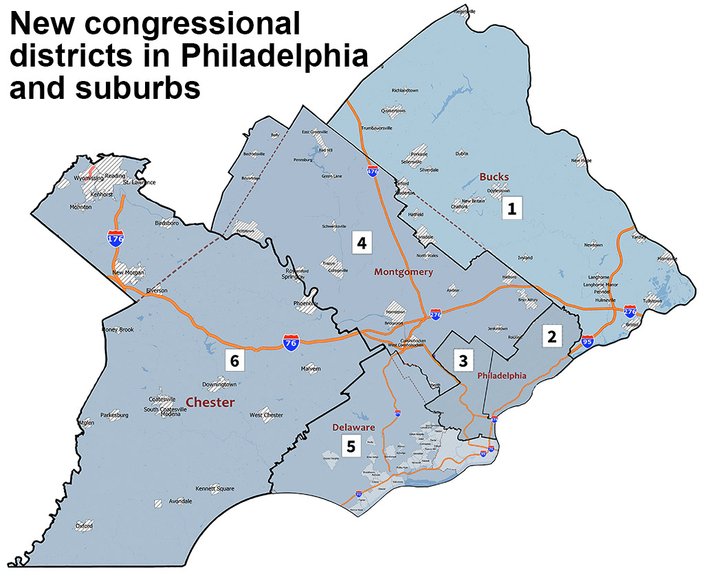 These six new congressional districts are part of the map of redrawn lines issued by the Pennsylvania Supreme Court to address what it found to be gerrymandering by state Republicans.

Montgomery County currently is split among five congressional districts. Under the new map, it will be split among three districts, with a small section containing Lansdale and Hatfield included in the newly-redrawn First Congressional District, which includes all of Bucks County.

A third section of Montgomery County will be included in the Fifth Congressional District, which includes all of Delaware County and portions of South Philly.

The new lines are slated to take effect for the upcoming election season, but Republican leaders are expected to challenge the map.

The Republicans argue the courts usurped legislative power by drawing up the new districts, which are expected to improve Pennsylvania Democrats' chances to win more seats in the U.S. House.